Behind the curves: Raphael Mazzucco's CULO

Raphael Mazzucco pays tribute to the derrière in his new book, Culo. 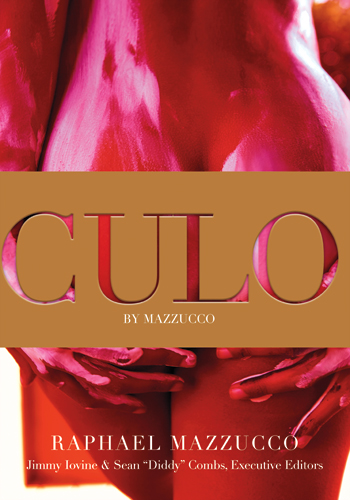 Sarah McLachlan,
Lady Gaga and Nicole Scherzinger are just a few of the boldface names who signed up to have their portraits shot—from behind. May we introduce
CULO by Mazzucco: a global photographic tribute to women’s derrières, shot in far-flung settings from the black sands of Iceland to the geysers of Chile.

CULO (which is Italian for bottom) is the brainchild of celebrated Canadian fashion photographer and visual artist Raphael Mazzucco, Sean “Diddy” Combs and music executive Jimmy Iovine, who was inspired by a booty-filled short film that will.i.am shot of Brazilian girls. But Mazzucco has created more than just a glossy coffee-table book. He has also put together a touring exhibit of large-scale prints (some are over two metres tall) from the
CULO collection that he layered with resin, paint and objets d’art. ELLE chatted with Mazzucco about the cheeky project he has been working on for two years.

It must be challenging to essentially shoot only one thing: ladies’ behinds.

“Each girl is such a different inspiration in the way she moves. And, of course, the different landscapes of all these countries—Kenya, Morocco,
Iceland, Vietnam, Italy, France, America and more—are inspiring. It gave us a lot of diversity and made us work in a raw, organic and spontaneous way.”

All the women you shot are lovely; they are young and fit, and their butts are beautiful. So, the book is not a blanket celebration of all behinds.

“It wasn’t one of those things where we said ‘Let’s not put somebody bigger in the book.’ It just happened that these were the girls who got in because they’re friends of mine or they’re with Jimmy’s label. I had also shot a lot of the girls in the past, so they were comfortable with me and I was comfortable shooting them.”

As women, we’ve all said “Does this make my butt look big?” What did you learn about women and how we feel about our bodies?

“My job is to make art out of it. I never want anybody to feel uneasy when I’m shooting. To make beautiful pictures, and to make art, you have to be super-comfortable—whether you’re the model or the photographer. It has to be a place you can go to explore, so I’ve learned to be as spontaneous as I can. Things happen when you don’t force it. It really wasn’t about the culo, you know? It’s about celebrating the female side.”

CULO by Mazzucco has been referred to as “the ass book.” Does that make you chuckle or do you think it diminishes your work?

“I think the name is really funny and great. Jimmy was in Brooklyn—where he’s from originally— talking to an old friend about what he was up to lately, and he mentioned that I was shooting this book about women. His friend said, ‘Oh, you’re doing a culo book!’ and [Jimmy] thought, ‘Wow, Culo by Mazzucco!’”

Will women be privileged enough to get an entire book of men’s butts?

“We started off wanting to shoot both, but as the whole thing developed, with me shooting so many women, it was much easier to do one thing first. We did shoot John Legend and his girlfriend, but we didn’t think it was right to have just
one guy in there. So, who knows? Maybe men next!”