The only heavy metal band from Iraq gets a boost at the Toronto International Film Festival. 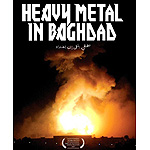 Members of metal band Acrassicauda wear counterfeit Metallica, Slipnot and Slayer t-shirts that they bought on the black market. At the six concerts they performed, their fans often crouched low to the floor to headbang so they couldn’t be viewed through the windows. A song was even written for Saddam Hussein called “Youth Of Iraq.” That was the only way they could get away with playing western music. That was also before the leader was toppled by American forces and the Iraqi people “freed.”

Acrassicauda is Iraq’s “only heavy metal band” and Canadian filmmakers Suroosh Alvi and Eddy Moretti have documented the young men’s quest to rock-out in the moving film, Heavy Metal In Baghdad, which recently screened at the 2007 Toronto International Film Festival. Since 2000, the band has played six concerts in Iraq and two in Syria. The crux of the doc is these guys are not free at all — not free to rock, not free to headbang, not free to travel, not free to live like you or I.

“The reason they’re referred to as Iraq’s only heavy metal band is because they are the only band to ever have successfully played on a stage live in Baghdad because it was so dangerous,” says Alvi, who had to wear a bullet proof vest and be escorted by armed security/guides the entire time he and Moretti were there. “After Saddam fell and there was the rise of the insurgency, they [the band] started receiving death threats for being Satan worshippers.”

When Alvi and Moretti filmed the Iraq portion of the documentary, they went to the building that once housed Acrassicauda’s rehearsal space. It had been hit by a scud missile and all their gear destroyed. One by one, the band members — Marwan, Tony, Faisal, Firas — fled to Damascus, Syria, where they hoped to revive the band. Alvi and Moretti visited them there too and found life for these “rock ‘n’ roll refugees” tough.

* Last names withheld by requestSince the completion of Heavy Metal In Baghdad, Marwan, Tony, Faisal and Firas (who has a wife and child) have struggled to make ends meet and were forced to sell their instruments. And that’s not the worst of it. Their visas run out starting October 10, and the young men are being sent back to Iraq where they feel they will be killed. At best, they won’t be able to play metal.

Since receiving this news the past month, Alvi and Moretti have set up a PayPal account on heavymetalinbaghdad.com to help raise money to get Acrassicauda to a safe neighbouring country.

“The short term goal was to raise enough money for them to buy [plane] tickets and to have money when they land into this country, before October 10th, and it’s going okay,” says Alvi. “It’s a $20,000 goal, the short-term goal, to get them out, and we’ve raised over three [thousand] and with that three, the tickets have been bought. And now we need to raise money so that they have cash in their pockets when they land in this other country that I can’t say.”

Alvi says that there are 1.2 million Iraqi refugees in Syria and in the hundreds of thousands in Jordan, while the U.S. has let in less than 500, and Canada no more than half that. The Canadian Embassy denied Acrassicauda entry to Canada to attend the TIFF screening.

“There are people out there who have criticized us, saying why are we helping these four guys in a metal band when there are a million people out there who are suffering?” says Alvi, “and the answer is, we really aren’t going to against government policy on this; we’re just trying to raise awareness and help these individuals who can be ambassadors with a message because they are musicians and they have things to say. They will be great spokespeople for this and will be able to raise awareness even more. Bottom line, we can help four lives.”