Ahhh, the cottage. A place of refuge from the daily grind of city life. 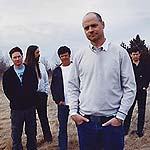 The cottage is as Canadian as beer, hockey maple syrup and swindling federal governments. If you’re lucky enough to have one of your own (or to have friends with such benefits), the cottage is the greatest place to spend those lazy, hazy summer days. Just you, the fresh air, the untouched wilderness and hours to read, play boggle and most importantly — listen to music.

Yes, we all know how important the cottage soundtrack is and it wouldn’t be August 2008 if we didn’t bring up classic cottage albums while also listing some new favourites.

Someone tell Marty McFly to gas up the Delorian because we’re going to head back in time to some of our favorite classic cottage albums.

There was a time when the sweet sounds of David Wilcox came out of radios in Ford Tempos all across Canada. He had a coiffed ‘do, donned a Bill Cosby sweater and loved booze and dope as much as Kim Mitchell loved his hair. You may not go directly for this album these days (unless you still rock the mullet, but this Labour Day long weekend give it a try. There’s no doubt you’ll get the crowd singing along to classics like Riverboat Fantasy, Bearcat and Bad Apple. Don’t lie, you know the words to these tunes! Aside from a few drug references, this album is inoffensive and can be thrown on without worrying about Granny busting out her rosary beads and Little Johnny Jr. repeating any musical F-bombs.

Ok, it’s another “Greatest Hits” record out of a million, but there’s a reason those tracks were put together on one CD: they’re great! This album is catchy, sing-able and won’t ruffle too many Loon feathers if you blast it in cottage country. Tune up all of the Miller classics, including karaoke fave The Joker, classic rock radio fave Jet Airliner and my fave, Jungle Love. Aren’t you just salivating for a sip of Labatt 50 while tanning on the dock right now?

Right when grunge music was making its mark in the early ’90s, Cameron Crowe wrote and directed a quirky romantic comedy starring Brigit Fonda, Campbell Scott, Kyra Sedgwick and Matt Dillon. The film pales in comparison to the soundtrack. Singles cashed in on the trends of angst-ridden music and compiled the best grunge had to offer at the time including, Alice in Chains, Mother Love Bone, Screaming Trees and Pearl Jam. Although the movie didn’t cash in at the box office, the soundtrack became a bestseller three months before the release of the film, thus becoming a cottage must. I don’t know if anyone over 50 will be into this one, but that’s what Steve Miller is for.

1. The Tragically Hip – Any album

We simply couldn’t have a cottage music list without including The Tragically Hip; it may possibly be illegal in these parts. The Hip are the quintessential Canadian cottage soundtrack band and I couldn’t imagine picking one particular album; any or all of The Hips discography will do. Go back to the beginning with Up To Here or Road Apples then go ahead and throw on their latest effort, World Container. No matter what album you reach for, you know you’re going to put on a crowd pleaser when you reach for The Hip. The Tragically Hip top this year’s list of classic cottage albums because of their musical talent and, well, hipness.

I could possibly get shot for not including these in the top 5, but honorable mentions go to:

…. there are way too many to mention. Let me know what your classic cottage album is at [email protected]!Future cottage classics

6. Dave Matthews Under the Table and Dreaming
With dreamy melodies and passionate lyrics this album is for more than the dorm rooms of an all-female residence. Just imagine the sun setting behind the pines while you’re sipping on a cesar, listening to Satellite all while sniffing the steaks sizzling on the BBQ behind you.

The boys from Vegas blew us all away with their debut album Hot Fuss in 2004. We hadn’t really heard anything like Somebody Told Me until The Killers came blasting through our iPods. With hit after hit Hot Fuss was in everyone’s collection; there’s no doubt that the little ones today will treat it like classic rock in the future, this album is a cottage must-have.

What is it about this album that is so good time-and-time again? It’s Kanye’s most listenable album and one that can easily get the day at the cottage started right. Just throw on Good Morning while you’re cooking up the bacon and making the coffee and you’ll be ready for a day of waterskiing, tubing and dancing on the dock.

3. Coldplay A Rush of Blood to the Head

Much like the Dave Matthews recommendation from cottage classics, this album is the one you throw on while you’re winding down, before the night debauchery begins. Clocks, Green Eyes and In My Place make for a breezy background while sitting around a roaring fire. It’s also a good way to get your lady in the mood if you’re on a romantic cottage getaway; I imagine it’s worked for Chris Martin at least twice.

2. The White Stripes White Blood Cells
Nothing says good old-fashioned cottage rock like The White Stripes. The simplicity and sheer rawness of this twosome seems like a perfect fit for a cottage weekend complete with beer, guitars, swimming and playing.

1. Sam Roberts We Were Born in A Flame
There is no disputing that We Were Born in a Flame by Sam Roberts is the essential cottage album. When this album was released in 2003 Sam Roberts looked like a hot lumberjack straight out of cottage country, contributing to its #1 placement on our Future Cottage Classic list. This album is the quintessential Canadian go-to for the cottage. With tunes like Where Have All The Good People Gone and The Canadian Dream, it will have you bursting with national pride.Cottage cheese albums

So far we’ve listed our favourite albums from classics to new winners, but let’s face it, after hours in the sun and pitches of Sangria, our musical inhibitions may waver, thus the listens that we’d never be caught dead singing to sober; otherwise known as the Cottage cheese albums. Here, our Top 5:

It’s OK to admit you like the Grease soundtrack, but when it comes on at the cottage, be forewarned: Every girl there will inevitably sing along to every song. Although it may be fun for, oh, a minute, it’s definitely not worth an encore.

Is there anytime when Abba isn’t cheesy? Mamma Mia is amazing in its own right, but the cottage is not the right venue for Abba and their Swedish fromage.

This is Bret Michael’s newest album. Just imagine the ridicule you would get putting this one on! Actually, if anyone dares do it this August long weekend, please, please let me know how it goes for you. I predict hilarity will ensue.

I’ve never listened to this album but I make it a strict rule that whenever discussing anything to do with all-encompassing cheesiness, one must always include a David Hasselhoff reference.

I don’t really think I need to say much about this, do I? It really speaks for itself.