Finish off your summer with some of the sweetest sounds and hottest grooves. Here, our picks for the best new music. 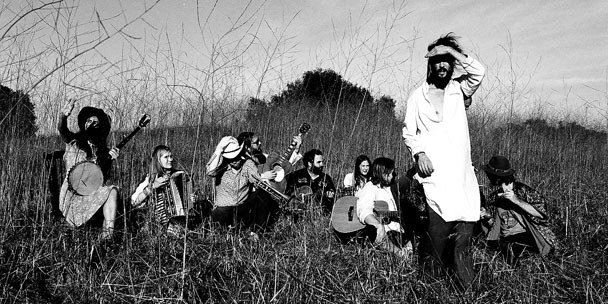 Edward Sharpe and the Magnetic Zero’s: Up From Below
Rough Trade Records, Community Music

What’s old is new again with Edward Sharpe and the Magnetic Zero’s debut album Up From Below. Although released in 2009, this Los Angeles based band is making new waves with their LSD-laced sounds of psychadelia. With new added momentum from the song “Janglin” featured in the 2011 Ford Fiesta commercial as well as “Home” in the film Cyrus, Edward Sharpe and the Zero’s are getting noticed on college radio (the epicenter of new, indie sounds) and now here on ELLECanada.com’s illustrious monthly music recommendations.

Led by Alex Ebert (formerly of Ima Robot) the collective mixes sounds ranging from Crosby, Stills, Nash and Young to Mumford and Sons interlaced with sprightly harmonies and whiskey-soaked lyrics. Edward Sharpe is the mind-bending creation of Ebert, a character sent down to Earth to save mankind (Who could have guessed that the messiah would be called Edward?)

The best song on the album, and perhaps the most recognizable, goes to “Home” where Ebert is joined by female vocalist Jade Castrinos. “Carries On” has a Partridge Family influence, not surprising since the band spent the summer of their release touring the States in a big white bus. There are a few tracks that are a bit too trippy for those of us born well outside of the summer of love. “Kisses Over Babylon” intertwines Spanish and English in a jambalaya of incomprehensible lyrics and trying-too-hard melodies.

Thankfully the next track “Brothers” brings the album back to a place we can understand and “Om Nashi Me” (whatever that means) somehow makes the sound of rain seem appropriate in a rock song without coming off too new age-y. I really like this album but it’s not for the musically unadventurous. Most people get Pad Thai when they order Thai food. This album is for those who go for Goong Dten (live shrimp).

Major Lazer and Jamie Lidell on the next page…

You don’t need to be an old rave kid from the ’90s in day-glow pants to enjoy this collaborative DJ effort brought to you by Diplo (en.wikipedia.org/wiki/Diplo_(DJ)) and Switch (en.wikipedia.org/wiki/Switch_(DJ)). The two met after both working with M.I.A, who subsequently shows up on “Sound of Siren” track one on the addictive EP. Their first full length (Guns Don’t Kill People Lazers Do) released last summer put them on the radar and their latest EP continues to build the momentum behind these seasoned vets. Blending global electro with more traditional reggae influences, Major Lazer can get the party started in the club, the car and the church. Ok, maybe not the last one but one can dream. This isn’t an album of new comers with dazzling cameos by Buraka Som Sistema in jump around house track “Bruk Out”.

Further along K.L.A.M bust out a remix of “Can’t Stop Now”, rapper Miss Banks making it a sass spectacular, bringing it from good to great. Are you ready for a huge name drop? Thom Yorke shows up on “Jump Up”. I have a theory: whenever Thom Yorke approves, it’s usually a pretty good indication that the band kills. Only 5 songs in total, Lazers Never Die leaves you wanting more. If you’re insatiable check out the Major Lazer and La Roux project, Lazerproof. It seems like an unlikely combo but much like the gas station snack combos, it somehow works.

Lidell hails from jolly ol’ England but has his hand firmly planted in Canada’s musical soil. Oft appearing with Canadian musicians Gonzales, Feist and Mocky, it’s no wonder he made it to the pages of ELLECanada.com. Here’s the best thing about Jaime Lidell: he is a musician. But aren’t all singers/songwriters musicians, you ask? Nope. Case in point: Britney. Liddel is a one-man band providing percussion and beat boxing, all layered over his sweet soul voice. This is a bold comparison but I’m going to do it anyhow. Lidell has some serious Stevie Wonder leanings; scandalous but so true.

Cue up “Enough is Enough” and hear Bill Withers drummer James Gadson bringing the funk. Fast-forward to “You Are Waking” for a mix of Motown and rock. The whole album is an obvious open lament about love and loss therein. “I Can’t Love Again”, “Completely Exposed” and “You See My Light” are just a few of the examples of the underlying theme of the album but there’s never a feeling of destitution throughout, even with broken hearts abound. It’s hard to feel bummed out with the sounds of funk and groove pumping out of the iPod. He’s part of the soul revival from the UK (albeit of the male sort) and with two solid albums under his belt, there’s no doubt Lidell will outlast the Winehouse’s of his country.