A tale of two ballerinas

Principal dancers Bridgett Zehr and Sonia Rodriguez are set to fly this season. 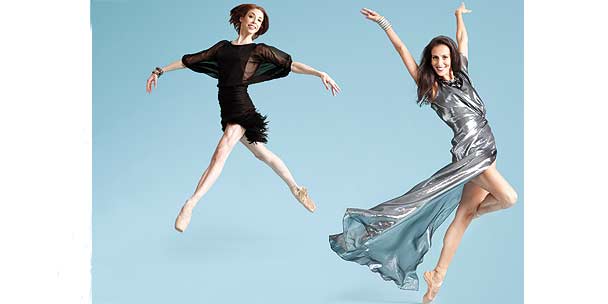 The National Ballet of Canada’s Sonia Rodriguez and Bridgett Zehr are a study in contrasts, both on and off the stage. Their different styles and per­sonalities will be on show in November in the world premiere of Canadian choreographer Aszure Barton’s new work. Rodriguez, who is entering her 10th year as a principal dancer, is a central character in Barton’s abstract exploration of relationships. Seasoned in affairs of the heart, the 36-year-old wife and mother brings an experienced perspective to the role, whereas the 24-year-old Zehr, who was promoted to principal earlier this year, plays an all-knowing ethereal creature who is somewhat removed from the drama of earthly affairs.

While the Toronto-born Rodriguez fondly remembers her debut as a principal dancer, she wouldn’t trade places with Zehr. “As I get older, I feel so much stronger as a dancer and so much more confident in who I am onstage. When you’re starting out, you’re trying to please everybody.” Zehr says that, like her character, she feels quite peaceful about her debut. “I’ve found a different kind of confidence,” she says. “I don’t have to prove myself with every step like I did when I was a first soloist. Now I can focus on the story I want to tell.”

Born to be a ballerina
Dating back to their early beginnings in dance, both women were drawn to the art form but for different reasons: For Rodriguez, it was the sense of freedom; for Zehr, it was the structure and discipline. “I saw Swan Lake, and I was mesmerized by the way the women seemed to float onstage,” recalls Rodriguez. “I was five, but I loved the sense of freedom it evoked.” To her disappointment, her first dance lessons seemed “contrived and restrictive.” “There wasn’t a moment when I fell in love with ballet; it was more of a slow transition, but by the time I was 12, I knew that this is what I wanted.” Zehr, who was raised in Sarasota, Fla., went to a ballet audition with her mother and ended up landing a seven-year scholarship with Sarasota Ballet’s Dance — the Next Generation program. “After my first year of lessons, I was obsessed,” says Zehr.

Both dancers have taken time off from dance but under different circumstances. Rodriguez (who is married to Kurt Browning) took a brief break after the birth of each of her two children, and Zehr spent a year recovering from a stress fracture in her foot. “There were moments when I didn’t think I would dance again,” recalls Zehr. “The time off wasn’t half as hard as trying to get back in shape!” Both dancers agree that the effort was worth it. “When you’re onstage and you know the audience is enjoying it and they’re with you, there’s no better feeling in the world,” says Zehr.

Read more
Are your shoes damaging your toes? Find out here!