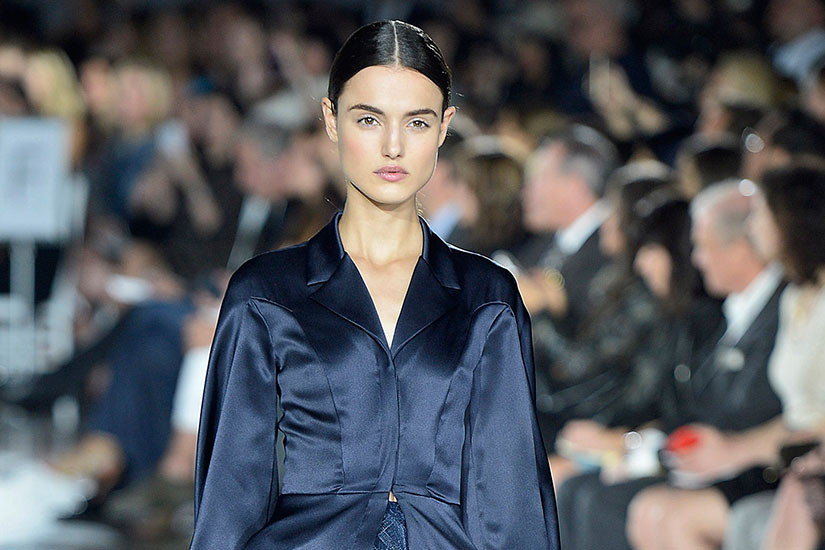 Think of the hair and makeup test as a dress rehearsal: a chance for the designer and lead artists to nail down the beauty look and see how it photographs before the big runway reveal. That’s why five days into New York Fashion Week, I head over to Zac Posen’s Midtown atelier, just 24 hours before his show.

When I arrive, makeup artist Diane Kendal is unpacking and arranging her kit—a sprawling collection of classic, new and yet-to-be-released M.A.C Cosmetics products that would make for an unboxing video of epic proportions. Turns out the look won’t require more than a few of them: Although the lauded American designer’s creations have become nearly synonymous with the overt glamour of the red carpet—Amy Schumer, Bella Thorne and Jennifer Hudson are among his celebrity clients who show up to sit front row for his spring/summer 2016 collection—this season marks a different approach.

“We’re showing the collection on flat shoes, so that says it all,” Posen tells me during the test. “It’s not about an hourglass shape. The waist is always there and the body is highlighted, but it’s off the body. It’s the same woman; it’s just that she can actually get across the room.” This sense of easy sophistication is reflected in the makeup, which “highlights each girl individ­ually, as her own star.”

Backstage, some models are given a strong brow, filled in with a Big Brow Pencil; others just have their face highlighted with the Strobe Cream. Three girls wear a matte-red lipstick much like the one Posen developed with M.A.C as part of their then unannounced collaboration.

“It’s not one singular look for the girls because that’s not how the world is,” says Posen. “I think it’s important at certain moments to come back to the idea that there is a person inside there. It’s not about a full facade all the time; it’s about enhancing that kind of inner confidence.”

1. “She was a really perfect choice. As a male designer, I think there are certain places where a woman brings a different attitude [to the brand]. Somebody with her artistry and calibre brings a kind of inner femininity and that attitude of what [a woman] would do as makeup.” – Zac Posen on choosing makeup artist Diane Kendal. They had previously worked together on the photo shoot for Posen’s M.A.C campaign.

2. Model Brenda Kranz at the hair and makeup test. To even out skin tone, Kendal applied Studio Waterweight Foundation using a foundation brush. Powder Blush in Blushbaby was blended into the apples of the cheeks.

3. Don’t dismiss “strobing” as just another social-media-influenced buzzword. Unlike contouring, which adds definition with shadow, strobing is about bringing light to the face. (Read “emulating the never-been-sunburned glow of your youth.”) “It’s about strategic placement: the minimal touches that have maximal effect,” says Romero Jennings, director of makeup artistry for M.A.C Cosmetics. At Posen, this meant applying the Strobe Cream down the nose, on the eyelids and along the cheekbones.

4. Like the makeup, nails took an individualistic turn. “Four of the girls—randomly—are getting a red nail,” says nail artist Keri Blair, who applied two coats of Studio Nail Lacquer in Flaming Rose ($14). “It’s their signature—like they wouldn’t leave the house without a red nail. It doesn’t necessarily mean they’re getting a red lip; it’s a bit more random and effortless than that. She’s not so matchy-matchy.”

5. Posen’s inspiration board was visible in his atelier throughout the hair and makeup test.

6. The unexpected hero product backstage? Tissues. When applying lipstick, Kendal held one against the outer edge of the lip line for added precision. They were also used to absorb excess oil.

7. Posen’s collection was shown in Vanderbilt Hall at Grand Central Terminal. (Not all backstage areas are so glam.) Call times fell during rush-hour traffic, so editors weaved through commuters to reach the entrance—and I gained an appreciation for Posen’s flat-heeled vision this season.

READ MORE:
Everything you need to know about using colour correctors
6 beauty hacks to get you through a date without a purse full of products
5 things you didn’t know about your Clarisonic