And other beauty/life lessons from the actress, including the best advice she’s ever received (it was from Cher). 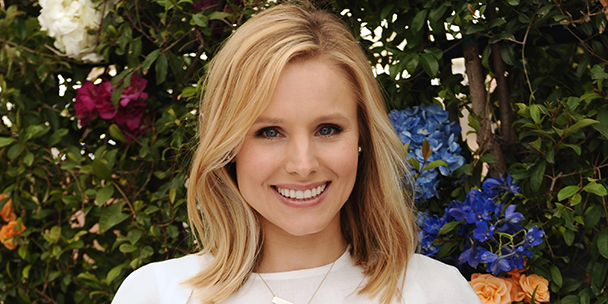 When I reach Kristen Bell, the Neutrogena ambassador has locked herself away in her “office,” a.k.a. the bed in her bedroom. “It’s the only place I can sit where the toddlers aren’t at my ankles,”
The Boss actress explains. For the launch of Neutrogena’s
See What’s Possible campaign, we discuss things in the realm of possibility for Bell: from likely (that
Frozen 2 could be better than the original), to highly unlikely (joining Snapchat).

You recently tweeted that it’s “passion and guts that make a woman beautiful.” What does having guts mean to you?

I think having guts is believing in yourself and being risky. Women are met with “you can’t,” everywhere, everyday, from every angle. And I think [having] guts is gracefully responding, “Yes I can, watch me.” A lot of progress has been made, and I certainly don’t mean to sound dramatic – this isn’t the suffrage movement – but we are still in an age where you see the first woman X or the first woman Y, and I think it’s about time for equality across the board. That’s what the See What’s Possible campaign is all about. It’s Neutrogena in particular participating in a conversation that is encouraging and healthy for all women. I have little girls and I want these conversations to be had to remind women that we are all on the same team, and encourage them to stop competing and start cooperating and see what we can achieve.

It seems like you don’t really hold back on Twitter. Do you find that you get a lot of people trolling you?

Sometimes. I speak my mind but not before considering what effect my words could have on people. I think it’s very important to be who you are, and I’m extremely opinionated. But I don’t tweet anything hateful or cruel, and in truth I really try not to tweet anything negative. I’m a big, big fan of “If you don’t have anything positive to say, shut up.” You know?

I have stopped taking things personally in my life. Or, I should say, my goal is to not take anything personally. Everyone has incentives, why are you incentivized to talk negatively about someone else? Because I’m not. It doesn’t gain me anything to talk smack about anyone. Or to troll anyone. I don’t get anything out of that. And so, when I put it in that perspective, it just makes the whole situation seem sad, to me. Like, it bums me out that you’re so negative. It’s a pity if anything.


I saw that you recently joined Instagram. How’s that going?

Good, it’s a little more pressure than Twitter because I try not to have my phone in my hand [all the time] and you can’t take pictures with your eyeballs. So, I’ve made a commitment not to feel pressure about it, and I will post something on Instagram when I think it’s amusing or important, and other than that I’m trying not to post nonsense just to post.

Have you ever considered Snapchat? It’s less pressure, you can be a little bit more spontaneous.

I still haven’t learned Snapchat yet. I’m one of those old women who needs a bit of a tutorial before I settle into something and I just now joined Instagram, after all these years of encouragement from my friends saying, “Stop being a grandmother, just join, it’s fun, trust us.” So I’m rounding the corner on Snapchat.

What’s an example of something you thought was impossible, but you came to realize is totally possible?

I thought that way about motherhood! I wasn’t positive I even wanted kids and the task seems daunting. [It was like,] “Wait a minute, you’re just going to give me this human and I own it now for 18 years, and I have to make sure it gets everything it needs?” How am I supposed to know what it needs? And it can’t talk, it’s screaming all the time. It’s just paralyzing. But it really does take a village, and in these days, the village is often chatrooms with other moms. Well not chatrooms, no one says that anymore… message boards, how about that? The village has become message boards on different baby and mother websites.

No. It’s funny, I won’t post questions because I find they’ve all been asked before. I find so much comfort in that. If I Google something, you know, hundreds of thousands of mothers before me have had the same question. Whether it’s about a health issue, little examples like, why my baby wasn’t sleeping, what a nine-month regression is, when you can transition them off breast milk – all of those things have been asked before, and mothers participate with other mothers online to help. That was something that I felt paralyzed with fear about, and it’s actually become a lot easier to me once I’ve opened myself up to receiving advice [from] other people who have been there.

Do you think that it’s possible that the sequel to Frozen might be better than the original Frozen?

Do you think its possible that you would do another Veronica Mars film?

Absolutely. Absolutely, I don’t know when, I don’t know where, but I believe it will happen. I think there are so many great opportunities now for properties to transition to a mini-series, cable, Netflix. I think it’s only a matter of time before we revisit
Veronica Mars.

What’s the best and worst advice you’ve ever received?

Cher once told me, “If it doesn’t matter in 5 years, it doesn’t matter.” It’s not a coincidence that “Let It Go” became so popular. I think it was a phrase people needed to hear, because worrying about what you cannot control is a waste of your time. So learning to manage my focus is a way that I apply that advice.

And the worst advice?

Honestly if I’ve ever gotten bad advice, its travelled out of my head as quickly as it travelled in. I have no time for bad advice.

Tell us about your beauty routine.

I treat my beauty routine like, almost meditative. My life is very fast paced, as everyone’s is, so when the toddlers have gone to bed, taking off my makeup – if I’ve even worn any – or just washing off my face and enjoying that is a really important part of my day. I love the Naturals Purifying Facial Cleanser because I feel like, especially living in California where the smog levels are really high, even if I don’t wear makeup it’s really important to get deep into the pores. I love using it on the Clarisonic brush, because I don’t push very hard on my skin, I find it exfoliates well using the brush and the cleanser. It gets me to a neutral place in my skin. I love, love, love the Hydro Boost Gel Cream. I use [the one for] extra dry skin, because my skin loves moisture, but because it’s a gel it’s not heavy. It has hyaluronic acid in it so it’s moisturizing you sort of from the inside out, in a weird way. And that’s my night routine.

I use sunscreen everyday. I find natural products are important to me, but I also really like products with ease of use. The stick that Neutrogena has for sunscreen is something I carry in every single purse and I have them in my kid’s backpack. I [use] the Ultra Sheer Stick, the 50 plus, because I like really high SPF. I reapply under my eyes during the day, and on my hands when I’m in the car sitting in traffic. I do think that the sun is wonderful, but I also think that it’s really, really damaging, and one of the ways I’ve been able to sustain a youthful look is by using sunscreen.

I also make tons of stuff. I use a body scrub in the shower, and I’ll mix brown sugar and honey and then sometimes coconut oil. I smell like a Mai Tai. It just feels luxurious while I’m doing it, and there’s something extra special since I made it for myself. It just makes me feel good.

As any good beauty routine should, I think.