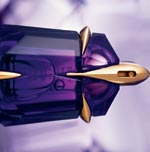 You might wonder what being in the Libyan desert has to do with a fragrance launch. There aren’t any handsome waiters offering flutes of champagne. Instead there are miles of honey-coloured sand and, if you look carefully, scarabs and snake prints glinting under the sun. But there’s a divine madness behind inviting magazine journalists to the ancient city of Siwa, perched on the border of Egypt and Libya. After 13 years, Thierry Mugler has created his second fragrance for women, Alien. And we have been invited into Mugler’s esoteric universe.

“When I first met Thierry in Paris, he visited the Bois de Boulogn every day to touch a tree,” says Vera Strubi, president of Thierry Mugler Parfums Worldwide and head of Stella Cadente Parfums. “he felt that it gave him energy because the tree is a symbol of life. His apartment is only sparsely furnished because he is not inspired by things around him, but by emptiness. That is why his favourite colour is light blue, because it’s the colour of the sky.”

Mugler, as it turns out, is also fascinated by deserts. He has visited all of them and is currently producing a book of photographs of creatures living in the Nevada desert. Five years ago, when Strubi and Mugler created the concept for Alien, Mugler envisioned the Alient woman as from Earth but with healing powers derived from ancient traditions. “We knew it would start with an A like Angel, and we wanted it to be five letters for luck,” says Strubi.

Like the desert itself, Alien feels both familiar and foreign, and this paradox is intentional. When Strubi sought a perfumer, the guidelines she gave were so contradictory, no one knew how to proceed. “We told the perfumers that we wanted something mysterious and rather dark — but at the same time very joyful and full of solar energy,” says Strubi, shaking her blond hair and chuckling. In the end, Strubi and Pierre Aulas, Mugler Parfums fragrance consultant, worked exclusively with the seasoned Dominique Ropion and the younger, “slightly mad” Lauren Bruyère, who brought an element of fantasy to the formula. Together they created an addictive exotic wood and amber with a bright, slightly “beachy” jasmine top note.

Photo courtesy of Norbert Mayer“What we found in our offices is that the women who liked Angel did not like Alien and vice versa. They are such different olfactory stories that they will attract different women,” says Strubi. “I know Alien is a provocative name and fragrance, but I much prefer that to the conventional choice,” Says Christian Courtin-Clarins, president and chief executive of Groupe Clarins. “I’m not very interested in demographics,” adds Strubi. “Happiness and emotional sensitivity are not linked to age or income.”

Strubi and Courtin-Clarins were prescient when they launched Angel ahead of the boom in angel mania. They acknowledge that Alien may not burst out of the gate, but say they can wait for early adopters to spread the word — as they did with Angel, which is still one of the world’s top-selling fragrances. “For me, fragrance is like a poker game,” says Strubi. “You try to do your best, but at a certain point, you have to stop. If I only knew how to make hits, I wouldn’t be working for another company, I would have my own! In the end, you have to be humble.”