The most iconic beauty muses from the past and present

Take inspiration from these beauties who have made their mark in history and pop culture. 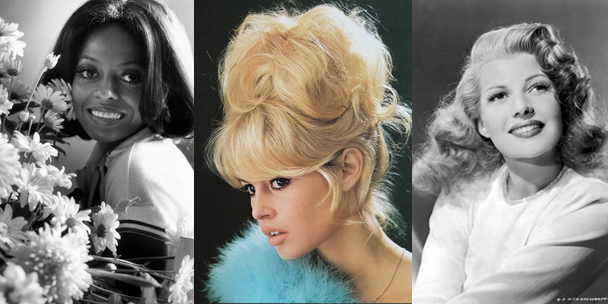 From hourglass-shaped beauties like Brigitte Bardot to waifish models like Kate Moss,
our beauty inspiration is constantly changing. But these classic beauty icons and their modern-day successors remind us that sometimes, our best beauty inspiration comes from the past.

The Danish-born actress was the muse and one-time wife of French New Wave cinema director, Jean-Luc Godard during the 1960s. Born as Hanne Karin Blarke Bayer, the starlet got her start in modelling, earning gigs with Pierre Cardin and Coco Chanel who helped give her stage name: “Anna Karina.” The gamine beauty was also known for her impeccable winged cat eye and coquettish smile.

Zooey Deschanel broke hearts in
500 Days of Summer and caused hair-envy in women everywhere thanks to her thick,
tousled locks and brown-grazing bangs. She’s also established herself as the quintessential girl-next-door with her big blue eyes and impish grin.

Brigitte Bardot possessed a simmering sexuality that she oozed both on and off the set. She was the consummate sex kitten with her bee-stung lips, signature cat eye and choucroute hair style (more famously known as the beehive).

The 27-year-old model burst onto the scene in 2006 and soon became a
Vogue favourite (Carine Roitfeld dedicated an entire issue to the Dutch beauty) and a runway mainstay. Stone, who bears an uncanny resemblance to Bardot, was dubbed the “anti-model” by Cathy Horyn for her gap-toothed smile, bleached eyebrows and voluptuous figure.

With her whispery vocals and chic style, Hardy was the epitome of Parisian cool. During the sixties, the French chanteuse became a household name in French pop. Her long straight hair, coupled with her chiseled cheekbones, made Hardy a hit with both men and women.

Charlotte Gainsbourg is the minimalist girl’s beauty icon with her unfussy hair and barely-there makeup. The unconventional beauty is also a muse and confidante of Nicolas Ghesquière and most recently, Balenciaga’s new fragrance, L’Essence. “There is a real softness in Charlotte and there is a real strength too. She is not artificial,” the designer told
Vogue Japan.


More iconic beauty muses on the next page…

Ross was one of the most successful entertainers of her time, first with The Supremes, then as a solo artist, and an actress. Ross embodied glamour with her signature faux-lashes, sculpted cheekbones and larger-than-life hair. In 2005, M.A.C. Cosmetics named her its beauty icon of the year.

Beyoncé can do fiery vixen as her alter ego, Sasha Fierce and sweet Southern belle in equal measure. Add a mega-watt smile, killer gams, and a powerhouse voice and she’s the baddest diva in town. She’s also a chameleon who can channel anyone from Audrey Hepburn (see her video for “Countdown”) to Marlene Dietrich on the cover of L’Uomo Vogue.

The Hollywood actress of the Golden Era was the original platinum blonde bombshell. The 1930s screen siren paved the way for many other blondes who capitalized on their flaxen locks, including the blondest of them all, Marilyn Monroe.

Stefani’s signature look is not unlike Harlow, consisting of a platinum blonde ’do and a scarlet pout (Mac Matte Lipstick in Russian Red is her go-to). In fact, the singer played the late actress in Martin Scorsese’s Aviator and even channeled the star on the cover of ELLE UK. She’s rocked a punk pompadour and Princess Leia buns, but it’s the retro-glam look that Stefani does best.

Actress and model Rita Hayworth was a pin-up girl and beauty icon during the fourties. Her fiery red mane was, in fact, not her natural hair colour. Originally a brunette, Hayworth changed her hair colour often for her roles (she purportedly dyed her hair as many as eight times for eight different films). She also starred in ad campaigns for Max Factor.

Christina Hendricks is best known for playing saucy secretary, Joan Holloway in Mad Men. In real life too, Hendricks looks like a throwback to the pin-up beauties of yesteryear. The actress sports a red bouffant on the show but she’s a natural blonde who’s always been fascinated by redheads.