Three top nail artists share their inspiration and insights for recreating the bold manicure designs they painted for the Spring/Summer 2012 runway shows. 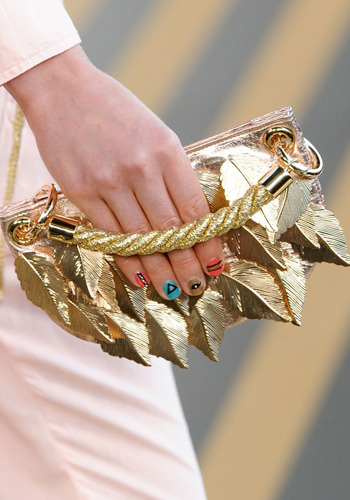 Here’s some
nail art logic for you: “Women around the globe look to designers’ runway looks for inspiration. The number of designers completing their looks with nail fashion surpasses the previous seasons—hence the nail fashion obsession!” So says Wanda Ruiz, the education ambassador for Creative Nail Design (CND), who created the psychedelic Time Machine manicure for Nicole Miller’s Fall/Winter 2012 show. We chatted with Ruiz and two other rock star manicurists—Sophy Robson and Zoe Pocock—for their DIY nail art tips and why they think kitschy, playfully
painted fingers and toes are here to stay.

Gold thumb: “I wanted the models’ thumbs and toes to be a rich gold so they would shine as the girls walked down the runway,” explains Robson. “Then I added little hieroglyphic style designs, like a pyramid and the ‘all-seeing eye,’ to each nail. The trend of having a different colour or style on each nail was reflected on the runway.”

Eye spy: “After the show, I did another version of the ‘all-seeing eye’ on a metallic background, which has been widely copied now. So I am very proud of how that influenced people all over the world— even if they don’t know it!”

Nailed it: “I like being the first to do things and create new trends. I am still obsessed with making nail designs credible and hate that so many people still regard it as ghetto or crafty. There is such a difference with what I do. It’s high end.”

The look: Your favourite childhood storybook—cuddly teddy bears,
candy floss pastels and retro cartoon characters. "The inspiration was given to us by Meadham Kirchhoff,"says Pocock, who replicated the London-based label’s whimsical, sugar and spice Spring/Summer collection for their line of nail wraps this season. "We tweaked and played with what they suggested to fit the wraps. They knew what they wanted but we had to make sure that when wearing the wraps, the designs would be seen and worked well. It was the best collaboration I’ve worked on so far and I look forward to working with them again. They are quirky and fun, just like Nail Rock!"

Kitschy fingers: “To be honest, I’ve never seen any kitschy nail art on the scene till the Meadham Kirchhoff Spring/Summer 2012 collection,” says Pocock. “I like the idea of painting your nails, too, and just wearing one design on the middle finger—a pastel polish with a quirky nail art finger.”

Lasting imprint: “A cool day look is to pair the nail wraps with polish. After applying a set of wraps, you have six left, which are good to keep for day looks and to pair with other nail art or the latest polish.”

Hand coordination: “I find myself matching my handbags and
shoes to my nails but have been known to match my quirky, going-out makeup to my nails. I think nails are the forgotten accessory and we need to remember to finish our look with our nails!”


For ways to transition into quirky Fall 2012 nail looks, read on…

The look: “Nicole Miller’s collection was inspired by the psychedelic tunes of Jimi Hendrix,” says Ruiz. “We played on her colourful muse by incorporating playful vibrant swirls to create a hypnotic effect. The designer knew she wanted a plum base for the nail, but we took it to the next level with a whimsical design.”

DIY rock star: “This look is super easy to
create at home—paint the entire nail with one coat of CND Colour in Plumville, then using a toothpick or detailing brush, swirl the following colors together: Electric Orange, Bicycle Yellow and Anchor Blue.”

Nail challenge: “I think nails should not be perfectly colour-coordinated to outfits. It’s fun to contrast and mix it up! At Nicole Miller, the Time Warp manis accessorized lush plum and fringed ’70s-inspired pieces and screen-printed fabrics. Even if you aren’t comfortable wearing geometric prints from head to toe, try a bold graphic nail with a checkerboard or
colour-blocked pattern. It’s a great way to get in on the season’s hottest trend without having to take quite as big of a fashion leap.”

Multiple personalities: “Nails are 20 opportunities for women to express their alter egos. Plus, women can have playful, expressive nails regardless of dress size, age or budget. With the acceptance of nails as a runway staple, the rules have changed about manicures as practical vs. a true style statement.” 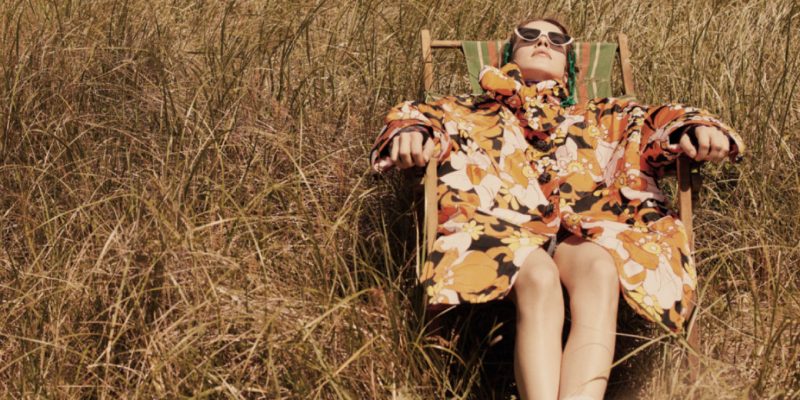