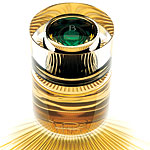 The wide-eyed hula hoop girl – love child of Betty Boop and Josephine Baker – had the tough-to-please fashion press in her moist little hands. And the grey Persian cat that walked the tightrope stopped the show. Spiegelworld, a travelling-circus-cum-cabaret, made a stop in New York during Fashion Week to fete the return of famed jeweller Boucheron to the Big Apple. The performance – named Désir – befitted the mouth-watering delectations from this Paris-based house. Yet, with devotees in Europe, Asia and the Middle East, Boucheron – which celebrates its 150th anniversary this year – is still better known for fragrances than fine jewellery in North America.

“Our clients are connoisseurs of jewellery,” says Jean-Christophe Bédos, president and CEO of Boucheron. “They appreciate something different.” Before any design is put into production, it has to meet several criteria, he adds. Sensuality is a key requirement: Not only must the creation be beautiful to the eye but it must also appeal to the senses of touch and even hearing. “How a pendant or earrings sound when they’re worn by a woman is as important as how they look,” says Bédos. The company’s international fans include Julianne Moore, Katie Holmes, Nicole Kidman, Queen Rania of Jordan and Kristin Scott Thomas.

The company took the same multi-sensory approach in the creation of its new perfume, B de Boucheron, which marks the 20th anniversary of the brand’s first fragrance. Inspired by its ultra-feminine jewellery collection, Exquises Confidences, the bottle design features many Boucheron signatures, including pleats, engravings and emerald-coloured accents. The fragrance is a woody floral that contains 20 natural essences, including cedar from the Atlas Mountains, Australian sandalwood, orange flower from Tunisia, osmanthus from China and pink pepper oil and vanilla from Madagascar. The seventh fragrance in the Boucheron stable, B continues the tradition of sensual offerings that evoke the opulence of the Orient. “For B de Boucheron, we wanted something classic, not trendy,” says Bédos. “To create Boucheron’s future, I insist that everyone who works with us understands our past. We’re always reinventing our company, but we always stay true to our brand DNA, which includes sensual desire, a touch of the Orient in our appreciation for history, a certain secrecy in our pieces, and organic shapes inspired by nature and animals.”

Despite recent roiling in the markets, Bédos is confident in the appeal of luxury products: “The fragrance market is still strong, which tells me that people want something of quality – something different.” And should madam like a little sparkler to go with that perfume, Boucheron has a salon privé for custom orders at the Hôtel Plaza Athénée. The company has also launched a North American e-commerce website for those for whom shopping for emerald earrings from the comfort of one’s chaise longue is the ultimate luxury.