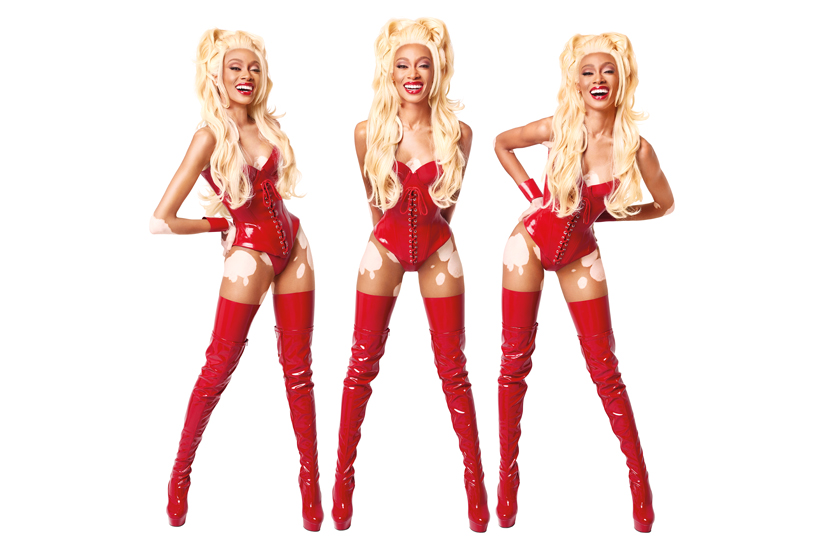 It’s been 25 years since Canadian-founded makeup giant M.A.C Cosmetics launched their Viva Glam initiative to raise money for those living with or affected by HIV/AIDS. To fete the anniversary, Canadian supermodel Winnie Harlow has recreated the original campaign images starring RuPaul, and the original Viva Glam lipstick shade, a fiery red, will be re-released for a limited time, along with two other new Viva Glam lipsticks in mauve and brown-plum.

Every cent from the sale of the lipsticks will go to the newly-named Viva Glam Fund (formerly the M.A.C AIDS Fund), which has raised $500 million to date.

The anniversary also marks an expanded mission for the initiative: according to stats provided in the brand’s press release, AIDS-related deaths have fallen by 50% since the fund launched in 1994, and there are 47% fewer new HIV infections globally.

In addition to continuing their support for groups working to end HIV/AIDS, M.A.C will also begin providing funds for Planned Parenthood, GLAAD and Girls, Inc. “to further their work in the areas of sexual health, LGBTQ rights and girls’ development, respectively.”

SURPRISE!! ?? THANK YOU @MACCosmetics for not only allowing me to be the new face of Mac Viva Glam, but using my Rupaul halloween costume inspo creative for the campaign! I worked hard to pull this look and shoot together with my team, Inspired by one of the greatest charitable campaigns from 1994 (the year i was born), and I’m excited to announce MAC is using it for the newest Viva Glam campaign. If you know me you know makeup is a love of mine so I’m speechless! There is no makeup campaign more ICONIC than the @MACcosmetics #VIVAGLAM campaign and I’m honored to work with them as they celebrate their 25t​h ​anniversary of Viva Glam ???❤️ #MACambassador

“We now have testing and treatment needed to end AIDS—now we need to address head on the inequities and stigma that prevent women, girls, and LGBTQ communities from seeking and staying in treatment,” said Nancy Mahon, global executive director for the fund and senior vice president, global corporate citizenship and sustainability at Estée Lauder Companies, which owns M.A.C, in a statement.

“In 2019, M.A.C will further that vision by evolving into the M.A.C Viva Glam Fund, a new name and an expanded mission that reflects the intersectional approach needed to end the epidemic.”

Head to the MAC Cosmetics website, here, to grab the lipsticks while they’re still available.