Fight off those extra pounds or love the shape you’re in -- that’s the beach bunny’s dilemma. 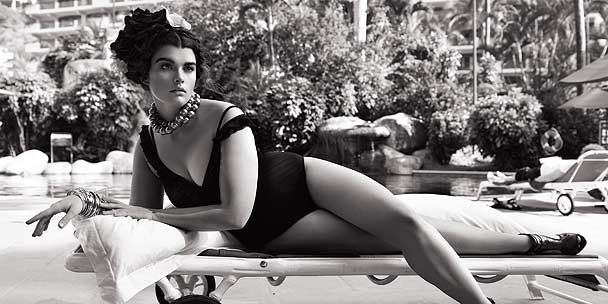 There is no dispute: The key to getting bikini-ready is choosing a fitness routine that will get you motivated. What’s your style: feeling the burn at a kick-butt boot camp or getting centred with a Zen workout?

If your goal is a strong, shapely body and you’re prepared to sweat, consider the Tracy Anderson Method. Anderson, a petite blonde based in Los Angeles, is the trainer responsible for Madonna’s Sticky & Sweet Tour shape and Gwyneth Paltrow’s Iron Man physique. She says that the secret to her workout is “a new routine every 10 days.”

“It’s not about changing your workout mindlessly,” she explains. “It’s about having a strategy.” The Tracy Anderson Method is the result of 10 years of research, which started when the former dancer was struggling with her own post-baby body shape. Her method mixes mat work with dance-inspired cardio exercises that “kick in the smaller muscle groups, exhaust the larger muscle groups and, ultimately, sculpt the body,” she explains. It’s a high-energy workout that gives new meaning to the term “high-definition”: It’s light on weightlifting (three pounds max) and heavy on reps (at least 50 per exer­cise). And prepare yourself for commitment. “You have to train at least 20 minutes a day, six days a week,” she says. “But the thing I love is that you get results right away. You’ll feel tighter immediately and, within a week, see a difference.”

In parks and parking lots across the country, boot-camp recruits meet at the crack of dawn for an hour-long drill of squats, lunges, push-ups and jogging. Typically, it’s a challenging mix of cardio and resistance training (using dumbbells, resistance bands or your own body weight). Although the military-inspired workout may sound better suited to those who are already in shape, former CFL star Tommy Europe, host of Slice TV’s
The Last 10 Pounds Bootcamp and Bulging Brides, says, “It’s for everybody.” But, he cautions, “If you don’t want to work, stay home or do something less demanding.” Europe likes to incorporate interval training  (30 seconds of hard work followed by 30 to 60 seconds of less intense effort) in his program — an exercise approach that, according to a 2007 University of Guelph study, boosts a woman’s ability to burn fat by 36 percent.

Europe swears by his “no pain, no gain” philosophy: “If you keep it up at least three times a week, it’s almost impossible not to see any gains,” he says. Participants on his show lose anywhere from four to 24 pounds in four weeks. For best results, look for classes that change the routine every week — that way, you’ll avoid boredom, stay motivated and ensure that you work your entire body, says Europe.

See what fitness gurus have to say on the next page …
Get your best body by doing this 30-minute workout three times a week
No more excuses! Transform your body into what you want it to be
Survival of the fittest

Fitness gurus
Prefer a more spiritual approach? Yoga has undeniably changed how North Americans think about exercise. The polar opposite of working out with a drill sergeant, practising yoga has the double benefits of working the body and easing the mind. In fact, according to Gitta Bechsgaard, founder of the Vidya Institute in Toronto, it’s not so much a workout routine as “a system of wisdom.”

“You don’t come out with rock-hard abs but rather with more of a centring strength,” says Bechsgaard. Not that yoga doesn’t produce hard bodies (think Jennifer Aniston, Sting, and Madonna before she met Tracy Anderson); it’s just not the primary focus. “In yoga, we think in terms of the health of the spine,” explains Bechsgaard. The Eastern practice of meditation, breathing exercises and postures not only encourages a strong, flexible spine but also stimulates the internal organs, calms the nervous system, regulates metabolism and improves circulation. “Overall, it brings body, mind and spirit into balance,” she says.

“Everybody can do this,” says Bechsgaard. It’s recommended that beginners do yoga once a week. But, she cautions, “Yoga is not the thing to take up if you say ‘In 10 weeks, I want X, Y and Z.’ Then again, I have rarely seen people disappointed. Usually, their goals shift.”

Another trendy practice that leans toward the softer side of the fitness scale is pilates. A series of exercises devised by Joseph Pilates 100 years ago, it was used as a form of rehabilitation in hospitals during the First World War. Like yoga, pilates is designed to increase flex­ibility and strengthen your back, but it focuses more on your core (your waist, abs and butt), the muscles that support you when you move, explains Amy Brown, owner of Pilates for Life in Toronto.

A popular workout with professional dancers, the exercises — which include variations on stretches, leg lifts, push-ups, crunches and twists — focus on improving posture and mobility while strengthening and lengthening muscles. The result? “You appear taller and leaner,” explains Brown. “It has taught me to be much more coordinated and graceful.”

Aside from its results, the beauty of pilates is that it’s a sneaky workout. “It doesn’t feel like hard work,” explains Brown. “Better yet, because it’s not gruelling, you can do it a few times a week.” You’ll start to lose inches around your mid­section and hips, but if you want to lose weight, you’ll have to couple it with cardio (walking, cycling or hitting the elliptical machine). “Within a month, you’ll feel stronger,” says Brown. “Within three months, every­one else will notice that you look taller and tighter and your clothes will fit differently.”

In the end, regardless of which workout you pick, you’ll need to arm yourself with a bit of dedication and discipline. What helps is seeing it as a beginning instead of as a means to an end, say experts. “Once you’ve begun, keep going,” says Europe. “It’s a lot easier to keep fit than to keep starting and stopping.” Anderson agrees: “Don’t look at it as a quick fix or you’re going to become skinny and fat over and over again.”

Read more
Get your best body now
How well do you handle stress?
Bust the myths and get the facts on fitness