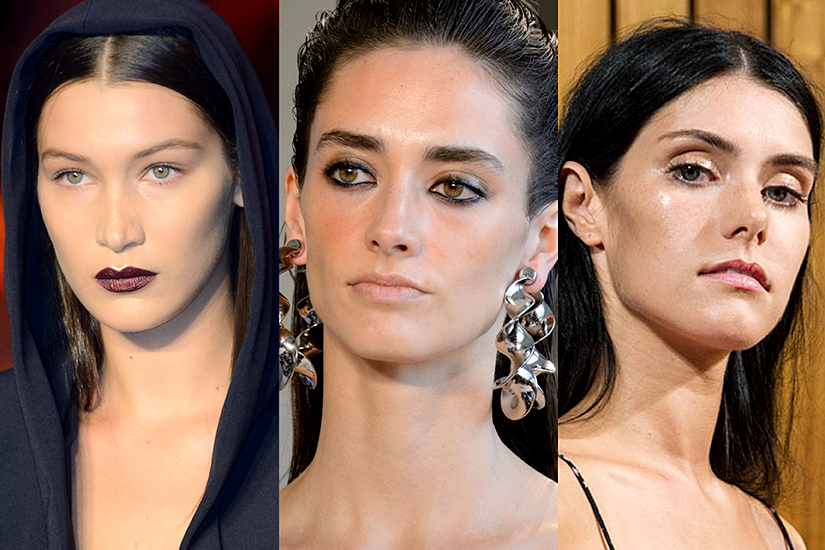 The look: Bella Hadid and the rest of the DKNY It-girls shut down the runway with sharp contour and dramatic, burgundy lips.

DIY: Bite the bullet and go all in when executing this goth-chic lip. The darker, the better. Because lips and cheeks are dramatic, keep eyes low-key.

The look: This gritty, slightly sweaty eye reminds us of the ultimate downtown NYC cool girl.

DIY: Makeup artist Tom Pecheux rimmed the upper and lower lashline with M.A.C Cosmetics Kohl Power Eye Pencil in Feline ($17, at maccosmetics.ca) and smudged it slightly with black eyeshadow for a messier look. Top off this look with a few thick layers of mascara.

The look: “It’s the lip colour for a girl going to a rave,” said Maybelline New York global makeup artist Yadim. He created a red lip for five of the models backstage at the Jason Wu show.

The look: “The makeup is meant to look as through the girls danced the night away, and their eyeliner stayed perfectly intact” says makeup artist Francelle Daly. Think rich, black khol-lined eyes, which paired with luminous dewy skin.

DIY: To recreate this look, grab NARS Kohliner in Minorque ($31, at sephora.com) and roughly line the tops of your eyes and waterline. They key to this look? The eyeliner should not look perfect. “Modernizing the way we wear eyeliner, this season we played with the shape and left negative space on the eyes,” says Daly. Finish off with two coats of NARS Audacious Mascara ($34, sephora.com).

The look: Nicky Zimmermann sought inspiration for her collection from her own thrilling experiences at nightclubs as a teenager growing up in Sydney. “It represented an escape from a sheltered childhood, a place where young people could express themselves,” she says. To compliment this, makeup artist Jodie Boland created a natural, no makeup look, by lining the model’s eyes with grey pigment.

DIY: This look requires little to no makeup. Simply line your lower lash line with grey and silver shades, and swipe a few coats of clear mascara through brows.

The look: GLOSSY. Inge Grognard’s controversial beauty look for Hood by Air was certainly unexpected at New York Fashion week. Vaseline and other gooey prods were used backstage to capture the essence of a girl described by nail artist Mar y Soul as “Miss messy.” While she may be messy, this model’s youthful glow and well-groomed brows are certainly something to envy.

The look: Maybelline New York Canada’s lead makeup artist Grace Lee wanted it to look though the girl in question “started out the night with a perfect red lipstick, and then gets into some trouble, or just a bit of fun along the way.” She blurred the edges of the lipstick and then topped off the colour with a healthy doss of gloss.

The look: Maybelline New York makeup artist Carole Colombani wanted to create a beauty look that was gender fluid, inspired by Generation Z. “The collection is about the freedom of a new generation, and the fact that life can be possible in this new place, and we created a look to incorporate that.”

The prods: The product used the most backstage at Etienne Deroeux? Maybelline Lip Studio Shine Shot Glossy Top Coat ($4.97, walmart.com). Carole used this as both an accent on the eyelids (to attract light to the eye,) as well as a top coat for the brows, to give a little extra sheen. Keeping things minimal, she applied light foundation and set with Maybelline Face Studio Wear Boosting Setting Spray ($12.96, at walmart.ca).

The look: The inspo for the beauty look at Jonathan Simkhai’s SS 2017 show? “A woman that has been walking for hours in the desert, and has been touched by the sun,” said makeup artist Gato.

DIY: Gato kept skin matte with a touch of sheen by layering two highlighters over foundation darker than their natural skintone, to make the girls appear as if they had been out in the sun for too long. Maybelline Master Strobe Illuminating Face Stick in Medium-Nude Glow ($7.94, at walmart.com) was used on cheekbones and Maybelline Facestudio Master Contour V-Shape Duo Stick ($12.96, walmart.ca), was used to enhance highlight.

The look: “I’ve never been that aspirational designer,” said Sandy Laing of her work, “”I’m not designing clothes for the girl who wants to be this person. I’m designing clothes for the girl who is who she is and rides the subway to work.” To reflect the designer’s aesthetic in the beauty look, Maybelline New York Canada makeup artist Grace Lee created the “ultimate New York City cool girl.” Using minimal products, she created a realistic look that was not over done.

DIY: Lee concealed imperfections and created a flawless base by using Maybelline Dream Cushion Foundation (launching January 2017), and then accented high points of the face (cheekbones, bridge of the nose and cupid’s bow) with a highlighter. She contoured cheekbones slightly, but focused most of her efforts on model’s brows, using Maybelline Brow Precise Volumizing Mascara ($8.94, walmart.com) to create “bold and bushy brows.” Several coats of mascara was applied to both top and bottom lashes, and the look was completed with a juicy, clear glossed lip.

The look: Maybelline New York gloabl makeup artist Yadim took inspiration from beauty pageants when he created the look for the Opening Ceremony show, deconstructing the traditional pageant queen for the runway look. “The show combines celebrities, models and some satire, so we wanted the makeup to be a simplistic version of what pageant makeup would be.” 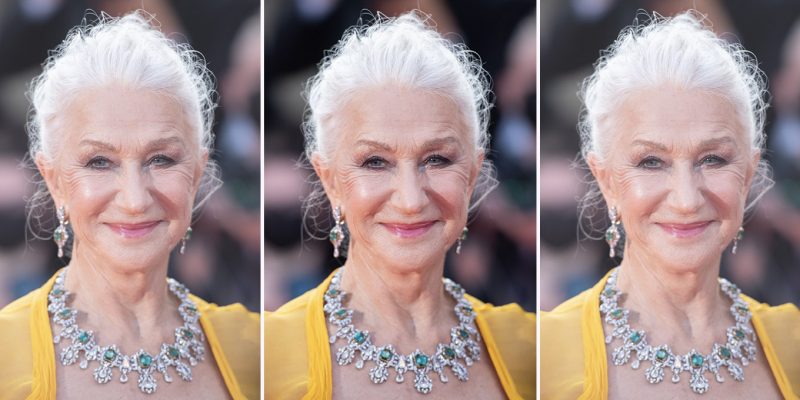