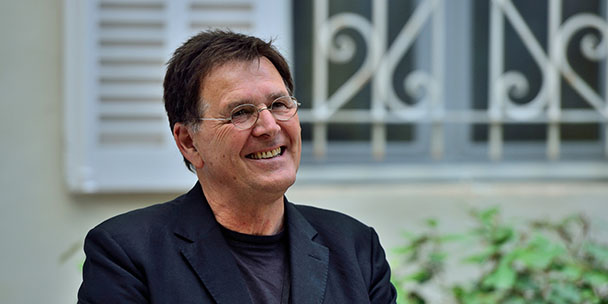 When I met L’Occitane founder Olivier Baussan over coffee (before 9 am, it should be noted), I immediately picked up on how passionate he was. And although Baussan has many interests (we covered Japanese philosophy and Canadian literature, for example) his native terroir of Provence is what really has his heart. Case in point: L’Occitane’s newest collection, “Arlésienne” which is built around a floral scent inspired by the tiny Provencal city of Arles in France, and the legendary Arlesian women, who are reputedly so alluring that people would visit the city just hoping to catch a glimpse of them. Baussan described these women as “an ideal of beauty” and so began a chat that, even through the medium of a translator, got real, real deep.

How do you define beauty?

“Beauty is an imaginary notion. It’s something you have in your mind.”

What is the most beautiful thing you have ever experienced?

“The first thing that comes to mind is actually a poem. It’s a haiku from a Japanese poet that says “The world of dew is a world of dew, and yet and yet”. The spirit of the whole thing is that the dew in the morning is really beautiful, but it doesn’t last, but this “and yet” shows that there’s always hope.”

GALLERY: This season’s most covetable scents

Why is that so beautiful to you?

“It actually questions all the worries that we have about this world. The world is beautiful, but we have all these worries about what is to come. It’s really a message of hope. In this poem, there’s a whole philosophy of life contained in these 5 syllables. It’s like a perfect photograph. I might actually be influenced by the reading I’m doing now of [Canadian] Joseph Boyden’s The Orenda. It is a story of Huron Indians, and this great philosophy and wisdom. The book is sad, but there’s always something positive coming up. In another novel by Boyden, a man is in a coma, but he comes out of it because his niece comes and visits him.”

Were you thinking of a specific woman who might be wearing or buying the Arlésienne collection?

“When I created the whole line, and the print of the bottle in particular, it was really inspired by the whole story from the 17th century to the early 19th century of these men and women who worked in the Arles cotton printing industry and the prints and carved wood boards that were used. It was actually that craftsmanship and artistic work that I had in mind, all of these people working to produce these fabrics. It was also to be a witness to this tradition, and give it to others. In a way, I had thousands and thousand of Arlesiens in mind.”

Where did your interest in the cotton printing industry come from?

“These wooden stamps have been a passion for quite a while. At first I just picked up a few here and there, and then one year, when we opened a spa in St Marie de la Mer in the heart of the Camargue, I wanted to add a kind of historic dimension to the decoration, and I thought of the stamps, and I happened to stumble on a big stock at an antique dealer, and I just bought them all.”

“I’m very much involved at the moment with the calissons, [French candies] made from almond paste—and almond trees. I love my land, and I want to valorize it and go beyond clichés, and show the potential poetry that is there. I really want to pass it on to people, to show them that these traditions are real and strong.”

The power of perfume

“She exists for me—she’s my wife! But she’s from Normandy.”

READ MORE:
The best fragrances to give—or receive—for the holidays 2014
All about Arles, France