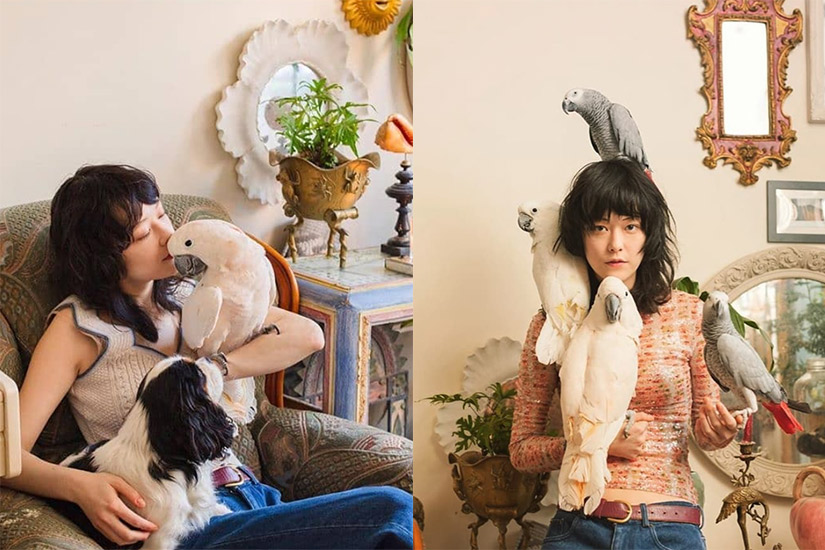 Just over four years into his brand-redefining tenure at Gucci, creative director Alessandro Michele is turning his eclectic eye to cosmetics, with the launch of 58 violet-scented lip- sticks in satin, sheer and translucent-balm finishes. Canadian-Parisian model Mae Lapres is one of several new faces for the campaign.

The rebirth of Gucci makeup (the original line, phased out in 2016, was never available in Canada) is aligned with Michele’s beauty manifesto: Makeup should be used to celebrate, never to hide. Case in point: the surprisingly divisive campaign image highlighting a gap-toothed grin from Dani Miller, of punk band Surfbort, who is missing two of her incisors.

It’s lipstick for the Gucci girl: imaginative and perfectly offbeat. “I love the idea of wearing what you feel in your heart and not because it’s the trendy lipstick,” said Thomas de Kluyver, global makeup artist for the brand, at the launch in New York City. “That’s the energy we want at the Gucci counters.”

“When you wear Gucci clothes, people can tell it’s Gucci,” says Lapres. “But with the lipstick, you decide how you want to wear it. Alessandro’s putting the creativity in our hands.

Below, we get to know more about Lapres.

ON THE GUCCI GIRL:

A Gucci girl is not scared to go out of her comfort zone. I really like vintage clothing; I’m always in flea markets and collecting clothes. I buy big bags of vintage clothes every week, and I’ve never sold, given away or lost anything. I’m 27 now and I’ve been doing this since I was 15 years old. I’ve archived everything, even Zara.

My friends always ask me to go shopping with them because they think I have great style. But whenever I show them something that I’ve found that’s really good, they say ‘Oh it’s not my style.’ I just don’t understand such an answer. If something is nice, why don’t you just wear it? A Gucci girl is really confident with who she is and that would not be scared of trying anything. She’s curious, inspiring and very free and open minded.

ON HER MANY PETS:

I started with Nelson, my African grey parrot, but he chose his master: my mom. So now he bites me, and I wanted a bird that would be my bird. So I got Kiki, a cockatoo. After that, I got Ceasar, a Moluccan cockatoo—Iggy Pop has one as well, named Biggy. And after that I got my dog Oliver, a Cavalier King Charles and then I got Colonel Gibson, a chameleon.

ON WALKING THE GUCCI SHOW WITH HER PARROT:

I usually go around Paris with my birds or my dog, or both. When the Gucci show is in Milan, I can’t really travel with my pets, but the show was in Paris and I wanted Kiki to see how it is at Gucci. I took her with me [to the casting]. I didn’t show her to the team, she was chilling with all the male models in the casting room and when I showed up in my look they asked me where the bird was, so I was like, ‘Oh you want the bird?’ Obviously, I was waiting for that. [Laughs] Then Kiki ended up in the show.

ON THE GUCCI LIPSTICKS:

The very good thing about the lipsticks is that the textures are very light. My skin can breathe. I can have it on all day and it’s easy to touch up. Some of the lipsticks you can apply pretty much anywhere on your skin. It’s really nice to just have one stick in your bag and you can do your eyeshadow and your contouring and your lips all in one. There is a colour that is called Three Wise Girls that I really like; it depends on my mood. I’m usually very natural, that’s why I really like the transparent and sheer ones.