Here, the makeup mogul reflects on the past 25 years of her brand. 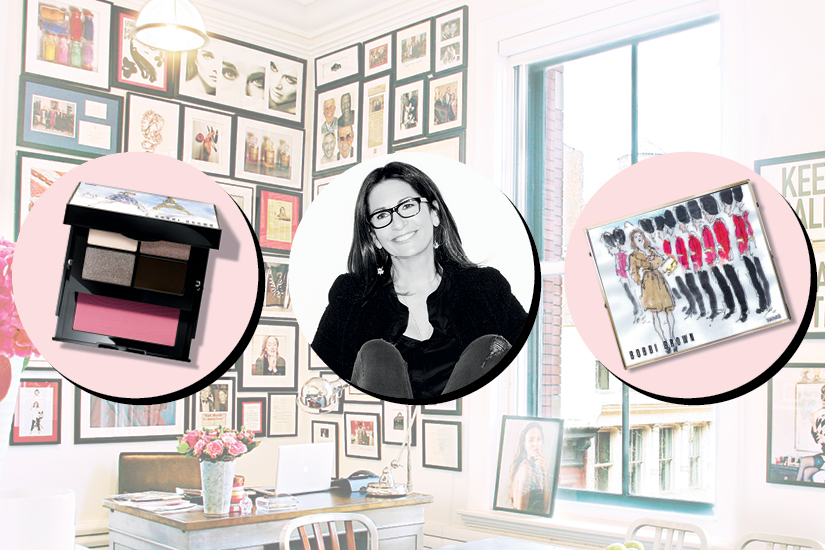 When Bobbi Brown launched her eponymous brand of makeup meant to enhance—not alter — one’s natural beauty in 1991, there was no NARS, no Charlotte Tilbury, no Pat McGrath Labs and no Surratt Beauty. It was still a relatively new concept that makeup artists could create their own commercially successful line of products. In September, we sat down with Brown in her SoHo office to discuss the brand’s 25th anniversary, which is being celebrated in 2017. This week, she announced in a statement to WWD that the milestone “made me realize it was time to start a new chapter and move on to new ventures.” The Estée Lauder-owned brand will continue on, but without Brown at the helm. Below, she tells us about doing makeup for a Rolling Stones album cover, working with Naomi Campbell on her first major magazine shoot (“She was cute, sweet and 14 years old”) and the handful of nicknames President Obama has for her.

I heard you’re very good at picking out women on the street to use in your campaigns. What’s your line when you meet someone?

Sometimes I say ‘Have you ever heard of Bobbi Brown the makeup company?’ When someone says ‘No,’ then I’m like, ‘Well, I have this cosmetics company and we use real models, and you can Google me.’ But I’ve found some beautiful girls on the street [to use in our campaigns].

What draws you to a face?

Someone that can photograph well. Because sometimes, really beautiful people don’t photograph as well. So if we need like six girls for a campaign, I will probably ask 12 to do it.

Why is that? Just how different face structures shoot?

Yeah. It could also be the moment. It’s funny, sometimes you do a shoot and it’s magic and then you might try it again and you’re like, “It’s not working. What did we do last time that worked so well?”

And where do you find these women? On the street around New York?

Tell me about those 10 original lipsticks and how they stood the test of time.

The original concept when I started the company, my very first thought that I had, was to make a lipstick that looked like lips – at the time I didn’t realize that everyone has different colour lips. But it was really the colour of the lips I wish I had, which I realize now is [the colour that appears] when you bite your lips. That’s the colour of lipstick that I want people to wear.

And it’s still the same formula?

Same formula, same manufacturer from day one. When Leonard Lauder bought the company in 1995, everyone advised both of us to go to the Lauder lab and Leonard said, ‘No way. You can’t change something people love.’ So we still have the same formula, same lab for 25 years.

Tell me about working with some of the great supermodels in their early years. You worked with Naomi Campbell on her first major magazine cover.

I had worked with her since she started. I did one of the first shoots for Vogue. She was cute, sweet and 14 years old. You know they do cover tries [test shoots for covers], and we went up to the Hamptons and got up at 4:30 a.m. in the morning so we could be ready at 6:00 a.m. when the sun came up.  We had no idea if it was even going to be a cover or not, because you do the tries all the time. So it was a really nice surprise [when it was a cover.]

Was that before you had launched the lipsticks?

Yeah, it was definitely before. And my lipstick story about that [experience] is at the time, Naomi was known for drawing in her lip with a dark pencil and putting light inside. I never liked it. And I didn’t even think about it, but I just did her lips in one colour [for the shoot]. I heard when she wasn’t happy with the cover, but I’m happy. [Laughs]. It wasn’t something that was so dated.

Did you struggle finding shades to complement her skintone at that time?

Huge struggle. I could not find a foundation on the market that really made a model not look a different colour than her body. Which is why I think I make such good foundation for women of colour, because I understand that. It was always really hard: I had to buy some yellow and orange and different colour pigments and powders from theatrical makeup stores to fix them.

And so yellow is a big component of your foundations now. What is it about yellow that is flattering?

Well if you look at your skin, the undertones are yellow. Very few people aren’t. Every once in a while you see someone who’s lily white, but most people have a little yellow.

When I started out, it was a new concept that a makeup artist was going to create a line of makeup. That was revolutionary. People think I’m smart because I have always included women of all colours [in my makeup shade range]. But it’s not smart; it makes sense! I want every woman who comes to a counter to find her foundation. I didn’t do it for some marketing reason or because it was in vogue at the time. You need a foundation that matches your skin.

“I love everything British,” says Brown, whose office is adorned with items cementing her anglophile status, including an official note to say that Kate Middleton wore Bobbi Brown makeup at her wedding. Above: Brown’s office in SoHo, New York City.

Another thing you’re passionate about is teaching women confidence and entrepreneurship skills. Tell me about working with the White House.

I’ve been very lucky because I’ve been invited for different purposes. I was invited for teaching entrepreneurship to kids. I was also invited to talk about self-esteem and confidence at a different time; another time I was there about healthy living.

Michelle [Obama] had this event where she invited girls from different Washington schools. There were probably 10 or 15 tables of ten girls at each table and she had me, the chef from the White House and her trainer. So we all talked about taking care of yourself, self-esteem. I brought all the retouched photos of all the models from our art department – and this was years ago when we were actually, it was the style to retouch pictures. We’re a lot more real now – but even, you know, there’s a hair that’s out of place, a pimple, foundation that gets stuck on the side of the nose, we have to retouch those things. So the girls were shocked. They didn’t know the companies did that. But I think it made them feel better seeing imperfections on the models that they admire.

And also, HD lighting is not what the reality is. Have you ever been shot in HD?

It is beyond freaking scary.

No one looks like that in real life. Tell me about doing makeup for the Rolling Stones.

Makeup gets you in these bizarre places that people don’t realize. [In the ’80s], photographer Annie Leibovitz hired me and I got to do the Rolling Stones’ makeup for the Dirty Work cover. It was really fun. Keith [Richards] wanted black, smoky eyes. I actually saved all of the smudgy cotton Q-tips for years; I don’t know where they are now! After I did their makeup, the stylist came in with all of their clothes on hangers. She closed the door and said, ‘Okay, guys, get ready.’ I’m cleaning up my makeup and I look up and all of the Rolling Stones are in their underwear, getting dressed. And years ago, when Bruce Springsteen came to New York, I went to New Jersey and I slept in a mall to get last-row tickets. Then I did the makeup for him and his wife for the 12-12-12 concert; I’m now friends with them and go backstage when he plays a show.

That’s crazy, how that happens.

It’s really crazy. I was literally in a car in the Lincoln Tunnel with Bruce and [his wife] Patti, talking about Bob Dylan. And I was sitting in the back seat going like…[shakes head in disbelief].

There’s so many. There were three parties at embassies for my 20th anniversary [one of which was the American embassy in Paris]. That was pretty cool. Doing Meryl Streep’s makeup was really fun. I’ve got more pictures with Obama than I know what to do with. I see him in the hallway in the White House and he’s like, ‘Hey B-Brown, what’s happening?’

Ha! Is that what he calls you?

Because you did his wife’s makeup for that, right?

I did her makeup. That was my first time in White House.

How are you seeing runway trends interpreted today as opposed to when you started out?

It’s so different. And right now, the no-makeup look, I’ve been doing it look for years, but for this season it’s the modern no-makeup look, because it’s actually makeup that looks like you’re not wearing any. It’s enhancing your natural beauty but helping you cover up your flaws. And I’m sorry, dark circles need to be brightened. [Laughs] Let me just stop it there.

I don’t think there’s any shame in brightening up your dark circles.

I don’t either. And then there’s this whole beautiful moment for Alicia Keys, she looks beautiful with no makeup. Everyone’s making this big deal. The woman looks flawless without makeup. I was actually at a very high profile party she was at. She literally had on a do-rag, sneakers and no makeup. For me, it’s empowering to be with women that are in the public [eye] and comfortable without doing anything. So I thought it was cool. I wear sneakers a lot now because it’s comfortable. Everyone knows I’m short. I think it’s about being who you are.

There are people doing the no-makeup makeup thing, then there’s the Instagram makeup thing.

It’s not my favourite. I don’t like it. But you know what? I don’t have to like everything and not everyone has to like what I like. If you like this kind of [no-makeup] look, which to me is a beautiful look, then you’re in luck at Bobbi. If you like to look made up, then you probably don’t want to wear Bobbi.

The City Collection pays homage to London, as well as Paris and New York. Bobbi Brown Limited-Edition City Collection London and Paris palettes ($75 each), at bobbibrowncosmetics.ca.