Hop over the pond and treat yourself with a visit to one of the best spas in London. 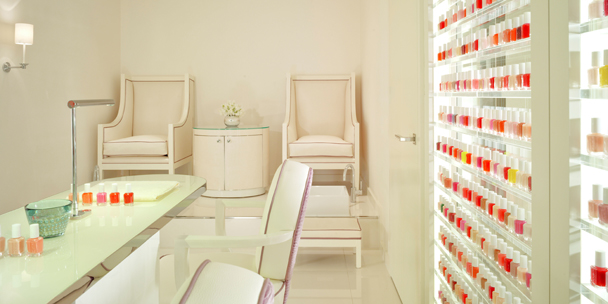 Above image courtesy of The Dorchester Spa.

There’s no doubt that the anticipation for the 2012 Summer Olympics has hit a fever pitch. If you happen to find yourself in London and in the midst of Olympic fever, you may want to take a minute (or few hours!) to escape it all. What better way to do that then with a relaxing trip to one of the best spas in town? From the upbeat Bliss Spa London to the swanky Ushvani, take your pick from our roundup of the best spas in London.

Reportedly supermodels Elle Macpherson and Sophie Dahl love a trip to the Dorchester Spa and who can blame them? Situated in the historic luxury hotel The Dorchester, The Dorchester Spa was refurbished and reopened in 2009. Since then it has quickly earned the reputation of being one of the best spas in London. The interior is a mix of 1930s Art Deco glamour and contemporary interior design. It features nine treatment rooms, which include “two double suites, a manicure-pedicure suite, a sleek relaxation room, male and female aromatic steam rooms and male and female experience showers” as well as a fully equipped gym facility. When you’re there, get the Carol Joy London Signature Facial, which consists of “a facial steam, FACIALSpure collagen mask and IV Lifting Mask” and will
leave your skin feeling firm and radiant.

You may not have known it but yes, everyone’s favourite retailer of fresh, handmade and
ethical cosmetics has it’s own chain of spas in the UK as well as locations in Paris and Tokyo. By all accounts, a visit to the Lush Spa in London is definitely unconventional spa experience with an English twist. The newest Lush Spa treatment is The Sound Bath. Along with a deep massage, facial and ear candling session, this one-hour treatment uses the power of sound (singing bowls, tuning fork vibrations and a made to measure soundtrack) to help clear and cleanse the mind. Other Lush Spa treatments include the signature Synaesthesia massage, Validation Facial, The Good Hour massage, Tailor Made massage and The Spell foot treatment.

Read the next page for three more of the best spas in London.

Above image courtesy of Ushvani.

If you’re searching for the ultimate holistic spa experience, look no further than Ushvani. From the moment you step inside the Ushvani facilities, you will be transported into a truly relaxing setting. Described as “an oasis of tranquility situated in the heart of Chelsea,” Ushvani has unique touches like “contemporary mandi baths […] specially commissioned Malaysian artworks throughout the spa and the delicate aroma of ginger, nutmeg and pandan leaves [in the air.]” If you visit Ushvani this summer, try the Ushvani Kaffir Lime Reinvigorating Ritual, which centers on Kaffir Lime. The ritual itself consists of four parts: a cleansing inhalation; a Kaffir Lime and Sugar Body Scrub; a massage with Ushvani Coconut and Hibiscus Oil and finally a foot massage with Kaffir Lime and Cocoa Butter. Don’t forget to pop into a yoga or pilates class and pick something from Ushvani’s all-natural line of skincare products.

A trip to the Bliss Spa London promises to be a playful and yet deeply fulfilling spa experience. With locations in cities all around the world, Bliss was actually founded by a Canadian (founder Marcia Kilgore) in New York City in 1996. Along with a chain of 21 spas, Bliss is also widely successful retailer of beauty products that are available at all their spas. Trying to achieve glowing skin? When you’re there get the popular Triple Oxygen Treatment, famously loved by Oprah Winfrey herself. It consists of an “ intensive cleansing, exfoliating, a fruit acid wash, a pre-extraction oxygen wrap, the necessary extractions, a calming oxygen and milk mask, hydrating enzyme pack and ‘vitaminized’ oxygen spray.”

Want a taste of the very good life? You may want to start with ESPA Life at the Corinthia Hotel London. Nestled in the heart of downtown London and just down the street from Trafalgar Square, Corinthia Hotel London is a luxury five star hotel that was restored in 2011. Spread over four floors and covering 3, 330 square metres, ESPA Life at Corinthia prides itself on being the “Next Generation of Spa” and up-to-date on the latest (and priciest) spa treatments. For the Summer of 2012, try the Summer Serenity Day Spa Experience which can include: a Red Carpet Blow Dry/Precision Men’s Haircut; personalized facial; personalized massage; file and re-polish of the hands and feet; maternity massage and reflexology. Add a Champagne Lunch in the Spa Lounge, full use of the Thermal Floor and Gym and a £20 gift certificate on the side for good measure.