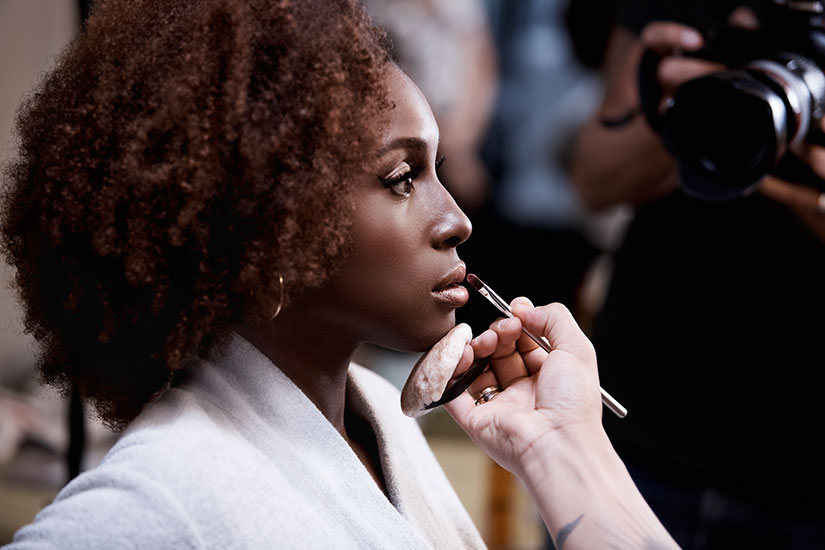 The glowing 33-year old Rae stars in, writes and produces her HBO show, Insecure, a hilarious (and poignant) look at the very messy millennial dating scene.

The new face of CoverGirl is all about Drake.

Her “glow up” comes from within.

“It all comes from walking in your purpose. When I started doing what I felt like I was truly supposed to be doing, all the other steps just naturally fell in order.”

“I wanted to [use makeup] but just didn’t know how. I didn’t really feel pressured to get into it until college because then my friends were all looking so fly and I was like, ‘Oh, I’ve got to catch up!’ And I was thirsty [on the dating scene] so I wanted to figure out how to do that. At that time, it was very much DIY—pre-YouTube tutorials—so it was just a mess!”

“They really do matter. There’s a photo of me and [Insecure co-star] Jay Ellis from back in maybe 2013; someone on the Internet took that photo and put it side by side with a picture from the Black Girls Rock event this year and the caption was ‘Freshman year vs. senior year.’ [Laughs] And it’s true. In the freshman photo, I didn’t really have eyebrows. I wasn’t focusing on that. That wasn’t part of my DIY makeup routine.”

That has changed, though, thanks to TV.

“You look at yourself a lot when you’re editing yourself [on film], so you start to see what features you like about yourself and what features you don’t. I focus on the positive and what I want to accentuate about myself. I’ve learned to love makeup and use it as an extension of my new-found confidence.”

What she loves about her looks.

“My eyes. I like seeing what Joanna Simkin [her makeup artist] does. She’s been instrumental in helping me with my own journey to makeup discovery. [Laughs] I also love my cheekbones. And I love to wear different lip colours. For a long time, I’ve been hearing that dark-skinned girls can’t get away with certain lip colours. To be able to dispel that myth is a personal mission.”

It feels good to be a spokesmodel for a mega-brand.

“It’s something that I didn’t think I was capable of. I just didn’t! This wasn’t on the horizon for me. [Signing the deal] felt huge—and validating. It was a moment when the interior confidence was validated by the exterior confidence. To be able to say, even comedically, ‘B*tch, I’m a CoverGirl.’ [Laughs] But, seriously, that’s just really, really dope to be able to say.”

Success is a journey.

“It’s a constant movement of the target for me. I set multiple goals, and once I reach one of them, [the success] is short-lived: ‘Yes, I did it. Whoo!’ And then it’s on to the next thing. But I think that’s the exciting part. It’s the confidence and the reassurance you get in setting up targets and knocking them out and striving toward the next one. I think when I run out of targets, when I run out of goals, then I’ll feel like, ‘Okay, I guess I’m done.’ But I don’t see that happening anytime soon.”

This article originally appeared in the February 2018 issue of ELLE Canada.