Is growing out your armpit hair the next summer grooming trend?

Going au naturel is the latest Hollywood trend. Would you try it? 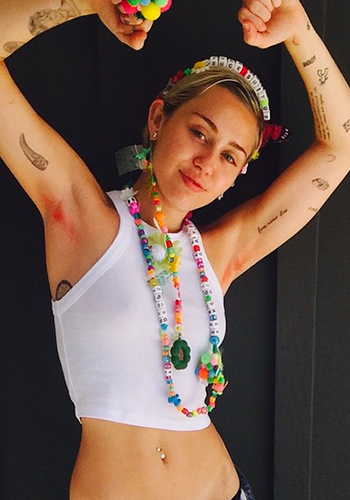 I’ve never been fastidious about hair maintenance. In high school, my best friend and I made a bet that we couldn’t last a month without shaving our legs. It was so easy that I went 90 days before finally taking a razor (or two) to my calves.

Even when I got my job as acting health and beauty editor at ELLE Canada, I shaved for my first day, but have barely grazed my legs with a razor in the month since. (Sorry for the overshare, new co-workers!)

That’s why I’m especially intrigued by the re-emergence of the armpit hair trend. (I say reemergence because of the huge publicity Julia Roberts’ infamous wave at the London premiere of Notting Hill garnered in 1999, with accompanying media backlash.)

More recently, Girls star Jemima Kirke sported an au natural look at the CFDA awards earlier this month. (Her co-star Lena Dunham has since added it to her summer to-do list.) Miley Cyrus also showed off her long underarm hair on her frenetic Instagram feed.

Then there’s Xiao Meili. A women’s rights advocate in China, Xiao Meili, organized a “Women’s Armpit Hair Competition” on the blogging site Weibo to challenge the cultural expectations that women’s underarms should be hairless. According to Meili, the practice has only been popular in China for the past couple of decades.

Meili has not only managed to make a political statement, she’s changed the conversation from one objectifying women to one empowering them. And that is so much better than the alternative. Perhaps Jemima Kirke said it best: “It’s just my own personal preference. That being said please can we stop talking about pits?”

READ MORE
Train like a fitness model
How to sweat like an ELLE Canada editor
Looking for a new summer sunscreen? Try these!