Thierry Mugler’s new fragrance is an ode to sisterhood. 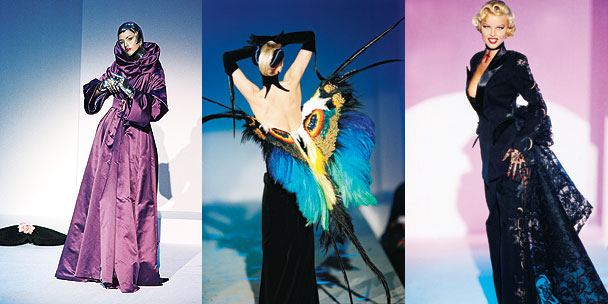 When Thierry Mugler temporarily exited the clothing business in 2002, fashion lost a certain style of woman. For one thing, she wasn’t a girl—or even a lady. The Mugler female was a woman of the world—although she was often dressed like one from outer space. While the shoulder-padded, high-gloss-leather skirtsuits in which Mugler used to dress women no longer appear on the runways, his bestselling fragrances waft on, each a bottled portrait of the woman of his dreams.

In Angel’s sugar-sweet scent, that woman is an ethereal being, about 40 percent flesh and blood and 60 percent Jerry Hall. In Alien’s scent, she is, well, an alien. But with the third and latest launch from the scent empire, the “she” of Mugler’s imagination transcends the lone female to represent womanhood in all its fragrant, fecund entirety—or, to coin a word (and a fragrance), Womanity.

Said out loud, the linguistic fusing of “woman” to “humanity” may sound like a mistake or lisp, but its sapphic significance is as exhilarating and triumphant as the vintage Helen Reddy anthem “I Am Woman.” What once could only have been asserted with a yell can now be celebrated with a spritz—such is Mugler’s contribution to the gender wars.

Is it women’s lib as eau de toilette? Not really. Womanity is not the perfume of mere equality; it is the sweet smell of total domination. (Think Xena: Warrior Princess.) The flacon is styled like an ancient Mayan hand grenade and stamped with the mask of an Amazonian Everywoman. Drifting over a battlefield strewn with the inert bodies of hapless men is the indefinable and utterly unique scent of Womanity—a never-beforeattempted union of sweet and salty. The tender, juicy ripeness of fig combined with the rich, oily saltiness of caviar will no doubt make Womanity as much of a new fragrance sensation as Angel was when it introduced its gourmand chocolatiness.

More on Mugler’s scents for women on the next page…

Scents and sensibility: Can a fragrance make you irresistible?

Womanity completes the triptych of Mugler scents for women. Like his other fragrances, it is almost certain to rise to the top of the perfume charts. It will do so not only because of its olfactive virtues—though, of these, there will be firm and fast fans—but also because it is a vision captured in a scent and diffused through the Internet. With womanity.com, Mugler has created a virtual pedestal to sisterhood, a dazzling digital array of what he calls “the invisible bond between women.” On the website, all of that is now wholly visible and expressed in tweets, photos, paintings, stories and videos from women around the world. In weighing in on the meaning of that mysterious and wonderful neologism, women are supplying word and image to an invisible fragrance and Mugler’s belief that, indeed, Womanity, thy name is Woman.