How Emma Stone got ready for the SAG Awards

What it really takes to get an actress ready for an awards show. 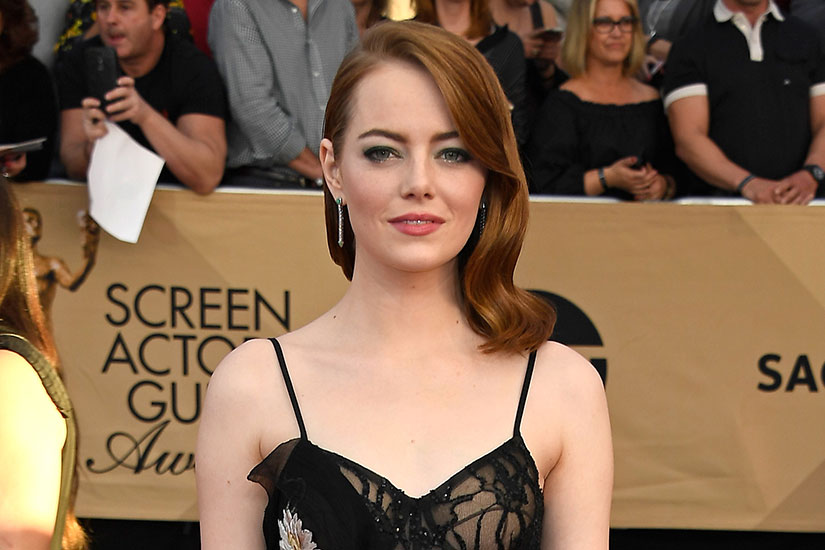 For celebrity hair and makeup artists, award show season, which begins sometime around November and ends sometime around February, is both a marathon and a sprint. For the 2017 Screen Actors Guild Awards, Rachel Goodwin, makeup artist for NARS Cosmetics, crafted the looks for Brie Larson, Michelle Dockery and longtime client Emma Stone. “It’s a little bit of a dance,” laughs Goodwin, who we reached over the phone in Los Angeles, of managing the makeup for three major stars. Here are 5 things we learned about what it really takes to get actresses ready for an awards show.

1. There isn’t always a makeup test.

“We didn’t do a run-through. I’ve worked with Emma for ten years, and it’s not that we don’t need a run-through, but this particular look was more of a conversation. We have a really easy dialogue because we’ve worked together for so long. I’ll bring ideas to her and she’ll either love it or not love it, but this one, we agreed it was a great approach and just kind of went for it.

I originally saw the [Alexander McQueen] dress a few weeks back in London at a fitting and I was so enchanted. I loved the hand-embroidered lilies. It immediately made me think of Monet’s water lilies, which are something I’ve adored my entire life. I try to visit any time I’m in Paris. I used it as an inspiration for the look. I wanted there to be different textures and light-reflecting qualities, so I used matte and shimmery pigments and stains, and I used pink and green to create something that was wearable and beautiful. I used a translucent liquid blush on her, and went over it with this sheer, soft pale pink to give that layered watercolour feeling, versus anything too heavy and blush-y. My approach was more painterly.”

Today&#39;s make up inspiration brought to you but #Monet #sagawards #waterlilies

“I’ll bring my own lights,” says Goodwin when I ask about notoriously tricky hotel lighting. “But it depends on the hotel room. Usually we’re pretty lucky, we’re getting ready for these things during the day. I’m all about natural light.”  The pre-show hotel room must-have? “Usually, there’s always got to be champagne,” says Goodwin. “It’s a staple. And if I have a say, it’s rosé.” [Laughs]

3. Once celebs leave for the night, no makeup artists are on hand to touch-up their makeup.

“Once they’re gone, they’re gone,” says Goodwin. “I don’t get to go with them to the red carpet. I have to trust the universe. I send them off with concealer, lipstick, Q-Tips and sometimes one of those tiny little Beautyblender sponges with a little bit of foundation on it [wrapped] inside a tissue. But that’s only if there’s space for that — sometimes there isn’t. I send Q-Tips because they are the perfect little fix-it for something around the lips if things are moving, or to clean-up any fall out from eyeliner or mascara. It’s just the best way not to disturb the rest of the makeup.

I definitely use a primer. I used the new NARS primer, and it gives a beautiful base — it has this satiny finish, it’s an airy feel. That’s usually what I do on days like today when I know that makeup needs to last for hours. Brie is not presenting until the end of the night! It’s the last award. It’s definitely nerve-wracking. Primer is a definite, it’s key.”

“I love to create dimension, but I don’t like it to look like makeup,” Goodwin told us. “We’re talking about a red carpet that’s on HDTV outside in broad daylight – it can be hot or rainy. It’s a very tricky balance to achieve, because I want my clients to look as good in person as they do on camera. You need to look perfect for hours and hours, there’s no forgiveness on HD.”

#BTS with British beauty @theladydockers for today&#39;s #sagawards nothing like a #NARS lip in Heat Wave ? #rachelgoodwinmakeup

5. Celebrities who look consistently amazing on the red carpet usually have a go-to team.

“I learn something every single time [I work with a celebrity]. I gauge what looks great, and I am focused on what I could do differently. I never feel 100% satisfied with anything I do, I think that’s just the artist in me. I want them to look like themselves, but the most heightened version of themselves that there is. Letting me be an artist and interpret that is a total pleasure, and that’s the beauty of working with people for years and years: you see what you would do differently next time, and you get a chance to do it.

Women who have records of looking wonderful on the red carpet – that’s not a mistake. They usually have a team that they’ve been working with for many, many years. They’ve made mistakes and they’ve learned from them. That’s the value of having a team.”

These girls make my ❤ smile