The most affordable Basquiat works you'll ever own. 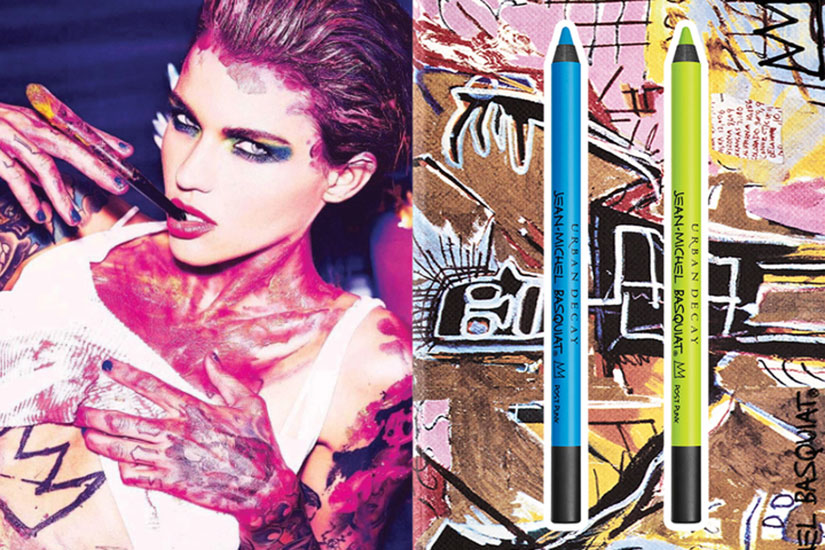 Urban Decay is partnering with the estate of prolific ’80s artist Jean-Michel Basquiat for a new, “seriously limited-edition” collaboration. The Brooklyn-born artist was a prominent member of the New York arts scene in the ’80s, alongside artists like Madonna, Andy Warhol and Debbie Harry. (See him in the music video for Blondie’s “Rapture”, here.) More recently, musicians like Jay Z—who raps about his “yellow Basquiat” in the corner of his kitchen in Picasso Baby, among other tracks—as well as The Weeknd, whose former signature hair was partly inspired by Basquiat’s, have referenced the graffiti-style artist.

Ruby Rose, who stars in the campaign (and was previously the face of UD’s Vice Lipstick) is another fan; the actress has Basquiat’s portrait tattooed on her arm, and his iconic crown design on her chest. According to Urban Decay co-founder Wende Zomnir, the campaign images were shot on Rose’s personal couch.

The collection will include one vivid and one neutral eyeshadow palette with all-new shades ($49 each), three new Vice Lipsticks in hues inspired by his work ($21 each), a blush/bronzer/highlighter palette ($45), three makeup cases ($40 to $60 each) and three vivid 24/7 Glide-On eyeliners ($25 each), as well as a “vault” that contains all makeup items in the collection for $300. All the products are encased in packaging printed with Basquiat’s Neo-Expressionist designs. Fun fact: The palettes each have hooks on them, so they can be displayed—like the art that they are—on the wall.

Trust us when we say this will sell out fast.