Sweat out the last few days of summer with these backstage hair and makeup tricks from New York Fashion Week spring/summer 2017. 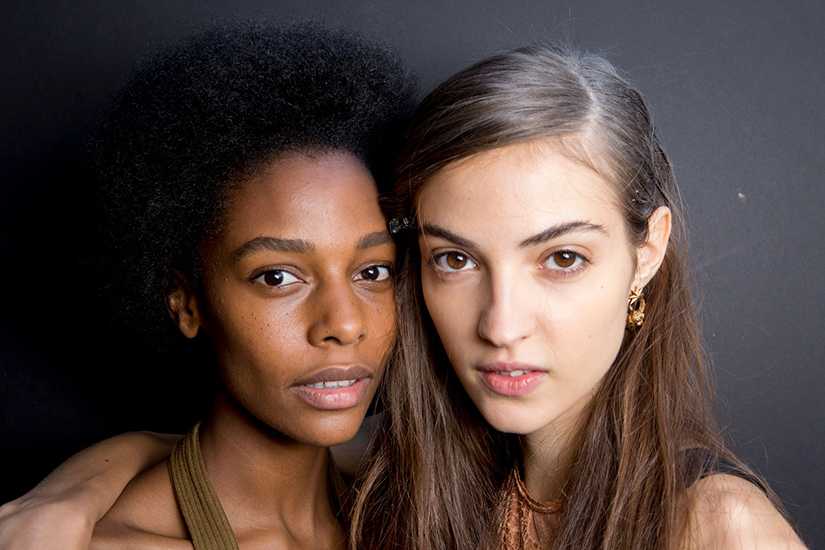 On my way to the Proenza Schouler show, I had to weave around models standing on the sidewalk to reach the backstage entrance. Later, chatting with Bumble and bumble stylist Anthony Turner, I found out why: he had sent them all outside to let their hair air dry. “We’re celebrating each girl for exactly who she is. There’s no trickery,” he told me. “There’s no smoke and mirrors, it’s literally just celebrating them for all the little mistakes that happen in their hair.” This meant washing every model’s hair (notable, because they don’t always have the ability to do that backstage – sometimes it’s just water in a spray bottle) and letting the parts fall as they may: center, side, what have you.

The key to preventing frizz with this method, says Turner, is using the right products. “We don’t want the hair to feel too full, so we just used a little bit of [Bumble and bumble’s] Hairdresser’s Invisible Oil to minimize frizz,” he added. “Just raking it through mid-length and ends, not really focusing on too much on the top because we don’t want to weigh the hair down too much. We want the hair to move on the runway, to feel light.” Note that there’s a time limit on this wash and go method. It’s a no-go as soon as it’s cold enough for hair to freeze.

Listen, NYFW was hot. Like, really, really hot. Not only outside, but quite often, backstage too. At Altuzarra, the makeup look suited the climate. “We’re doing a black smudgy, smoky eye,” said makeup artist Tom Pecheux, who mixed M.A.C Studio Eye Gloss in Next Up Neon (an orange shade) with black liner “to make everything run down [the face].”  Though Pecheux admits they were helping the eye to smudge, it was the room temp that did the rest of the work as models sat waiting for the show. “We want the girl to look like they were in the water, their makeup ran down a little bit and they’re rushing to put on a dress.”

Real life translation: Do your makeup, get ready to go out in your unairconditioned apartment then stand on the sweltering subway platform en route to your final destination. Parfait.

#MACBackstage at @altuzarra with makeup wizard @tompecheux who created a “naughty, sweaty” look in eye gloss and kohl for #SS17. Key products used: Kohl Power Eye Pencil in Feline and Studio Eye Gloss in Next Up Neon. @NYFW #NYFW

Put down the bronzer

Backstage at Michael Kors, beauty editors were surprised to see a significant lack of bronzer at a show that usually loves the stuff. “Every designer evolves,” said makeup artist Dick Page, when asked the reason for the significant change in beauty look. “If I think of all the designers I’ve worked with: Narciso Rodriguez has changed, Marc Jacobs has changed and Michael’s changed. Every designer goes through phases and this is where Michael has arrived at. It’s like a subdued idea of American sportswear, the prints, the brightness.” The overall effect? Easy, effortless and relaxed, says Page. “Though when you’re backstage with 56 girls, you’re [not] so relaxed,” he quipped. “But that’s the idea.”

If you don’t feel you have enough of a look sans bronzer, try patting lipstick (Page used M.A.C Lipstick in Impassion and Mangrove) just in the center of lips instead. “I put it on the tube right in the middle of the lip and buff it out from the centre to the edges,” says Page. “It has a nice vibrant colour. It’s got kind of a matte glow. It’s not totally flat, but the glow is not heavy.”