Christy Turlington Burns: A comeback fit for a supermodel

The model dubbed “the face of the century” talks becoming a star, giving back, and what Eternity means to her. 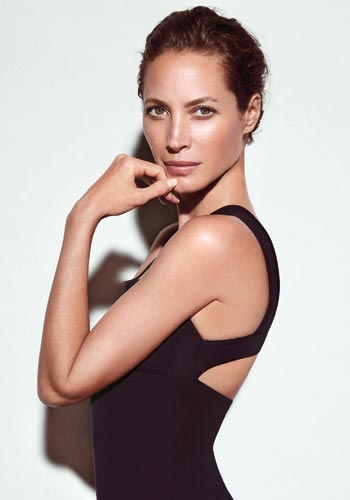 Her beauty defies description. Try and you will sound like an amateur Keats, flailing about with superlatives, grasping at hyperbole to do justice to that nose, that skin, those eyes that look blue, then grey, then green. The Metropolitan Museum of Art dubbed her "the face of the 20
th century," and, when that grand institution needed the definitive symbol of human symmetry, it cast her features in fiberglass for its Costume Institute mannequins. "When you look at her," Karl Lagerfeld once mused, "you think ‘It just can’t be–such perfect faces don’t exist."

This season, the face of the century is back in the spotlight. Christy Turlington Burns, activist, director and most super of supermodels, reprises her role in Calvin Klein’s iconic Eternity campaign with a very special partner: her husband, actor and director, Edward Burns. It has been 25 years since Klein himself tapped Turlington Burns, then 19, to be the face of the brand’s romantic lily-and-freesia follow-up to its smash hit, the overtly sexy Obsession. Those first Eternity ads, shot by Bruce Weber and inspired by photos of Elizabeth Taylor and her children, featured Turlington Burns looking ethereal in black and white. Eternity became a bestseller and she a star.

"When I look back over all the images of my career, those are the most classic," says Turlington Burns today, warm, charming and (yes, beyond) beautiful, silhouetted against the sun in a downtown New York hotel. "They’re the ones that I feel most like ‘Okay, the ‘80s weren’t all shoulder pads." In fact, the late ’80s–and much of the ‘90s–were all about supermodels. Turlington Burns and a handful of others–Linda Evangelista, Naomi Campbell, Cindy Crawford and Claudia Schiffer–transformed the modeling game, commanding unprecedented cash and sparkling headlines for their world domination and occasionally outlandish comments (Turlington Burns once recalled a nightmare that she was on The Arsenio Hall Show "covering Linda’s and Naomi’s mouths.") Known as "the nice one," she appeared on more than 500 magazine covers.

By the late ‘90s, however, Turlington Burns’ priorities had shifted. She studied comparative religion and Eastern philosophy at NYU and delved seriously into yoga and international philanthropy. In 2000, she met Burns at a party in the Hamptons. Today, they have two kids: Grace ("a tough cookie"), 10, and Finn, 8. "Time goes by so quickly," says Turlington Burns, with an eye-crinkling smile. "My husband and I have been together for 14 years, and you forget sometimes that ‘Oh, my God, this isn’t just a good thing–this is an amazing thing!"

Details on the new Eternity campaign on the next page…

The new Eternity campaign-shot in Turks and Caicos by Inez van Lamsweerde and Vinoodh Matadin-offered a lovely opportunity to take stock. "I was joking on-set that couples can rekindle their romance by doing a commercial together," says Turlington Burns and then deadpans, "Marriage is rolling around in the sand with a camera." If the resulting ads are anything to go by, happily ever after in the Turlington-Burns household is NSFW. Laughing, Turlington Burns cites the current shots as her Calvin Klein faves, adding that her definition of eternity has also evolved since she was a teen living out of her suitcase in a SoHo loft. "I wasn’t thinking about the future," she says, those famous eyes shifting colours as the New York afternoon sun deepens. "Now I feel more of a complete person. This is who I am."

GALLERY: The best bronzers of the summer

Where the heart is

"In the U.S., two or three women a day die in childbirth," says Christy Turlington Burns, explaining why she founded Every Mother Counts, a maternal-health advocacy group. "Because our health system is in disrepair, a lot of women fall through the cracks." The organization aims to make pregnancy safe for all women, from Orlando to Uganda, where Turlington Burns filmed No Woman, No Cry (2010), which explores the experience of expectant mothers worldwide. Of maternal health treatment, Turlington Burns says, "It’s a serious indicator of when a country is prioritizing its women."

The excitement surrounding the 25th-anniversary Eternity campaign includes the launch of a brand-new fragrance: Eternity Night, a creamy floral confection of pink pepper, frangipani and sandalwood. Turlington Burns describes the scent as "seductive-more moody and sensual" than the original juice. "If we were having a date night…" she muses, trailing off as she holds her wrist to her nose. "It’s more for nighttime," she affirms. Talk about sweet dreams.