Cara Delevingne is particular about her mascara

The owner of the world's most famous pair of brows is more interested in her eyelashes. 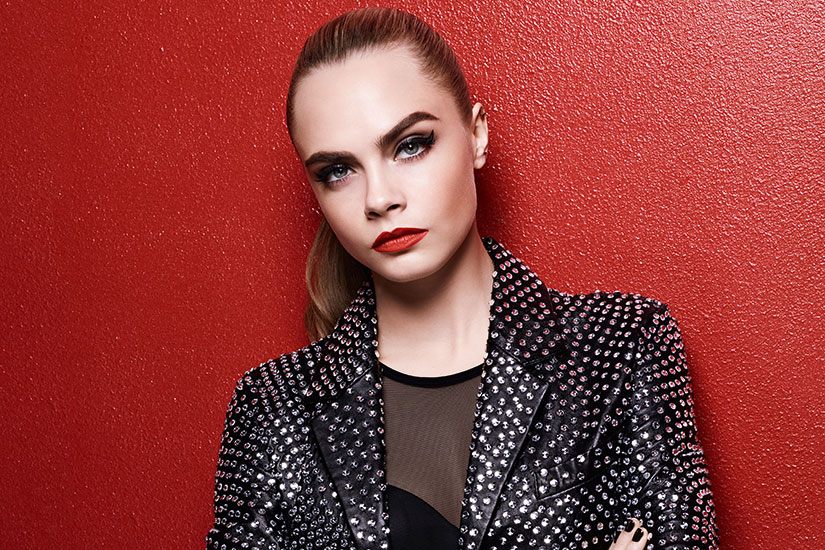 If you’ve read any articles about the ideal brow shape in the past five years, you know Cara Delevingne’s dense, expressive pair is it. A quick search on YouTube will find you just under 30,000 tutorials demonstrating how to get the look that Delevingne naturally wakes up with every morning, thanks to genetics and the luck of having been too young to wield a pair of tweezers in the ’90s. “I tend to leave them by themselves,” says the 24-year-old Rimmel London ambassador between bites of sushi in Shoreditch’s Ace Hotel in London. “Occasionally people do like to touch them, but I don’t generally do anything to them. They don’t like to be tamed.”

On the day we meet, Delevingne looks her usual blend of casual cool. She’s wearing an army-green lace-up bomber from Unravel Project, black skinny jeans and a pair of Pumas. The brows? They’ve only been given a cursory bit of attention by makeup artist Kirstin Piggott. “It’s all about eyes today,” Piggott says about the artful smoky look she has created on Delevingne in honour of the model turned actress’ latest role as the face of Rimmel London’s Scandaleyes Reloaded Mascara. It’s a strong fit for the outspoken Brit’s first campaign with the brand. In contrast to her live-and-let-live approach to her brows, Delevingne is particular about her lashes. “I’m pretty OCD about my mascara,” she admits, sitting cross-legged on the sofa. “I want to literally get every lash.”

Scandaleyes was redesigned with this kind of precision work in mind. Unlike the original wand, the new brush tapers off at the end, allowing it to reach lashes on the inner-most corner of the eye. “When the brush is really thick, it’s very hard not to touch the skin,” explains Piggott. “And most of us apply mascara last, so after you have perfected your eye makeup, you end up with dots of mascara [on your eyelids]. It’s really frustrating. The tapered brush allows for more control.” Millennial women—all women, really—expect nothing less from their products. “I think that as young women, we’ve got so much to do and we don’t have a lot of time to sit there and do makeup,” says Delevingne. “So the easier and more effective [products] are, the better.”

In 2015, Delevingne chose to leave modelling in pursuit of an acting career, despite astronomical success. She didn’t hold back when explaining her decision, telling the media she found herself deeply unhappy in the industry. I ask Delevingne if she considers it one of her most scandalous moments. “I don’t know if it was scandalous,” she says, adding that it was “definitely” an adventure. “I tend to go headfirst into things anyway. If you are confident, then other people kind of believe that you are too. It works.” Montse Passolas, vice-president of global marketing for Rimmel London, references this “fearless spirit” as one of the reasons Delevingne is a perfect partner for the brand, calling her “a true inspiration to young women everywhere.”

Beyond the brush, the mascara has another major point of difference from the original: an intensely pigmented volumizing formula that wipes off with warm water but won’t smudge during the day. It is, I learn, quite a feat–and not the first time the brand has had a major breakthrough in the mascara category. In 1864, Eugene Rimmel, the entrepreneurial son of a French perfumer who set up shop in Mayfair, invented Water Cosmetique, the world’s first non-toxic mascara. Today, all mascaras are made up of waxes, pigments and oils in various combinations. Why mascara clumps (or doesn’t) depends largely on how the brush and the formulation work together. “What happens is that many of the volumizing formulas contain a lot of wax,” explains Dhavel Patel, vice-president of research and development for Rimmel London. “They tend to dry pretty fast on the lashes, so you don’t get a lot of time to actually shape them.”

Different types of waxes have different effects on the formula. Rimmel London uses a proprietary combination of waxes based on the type of mascara they’re looking to develop. “Wax is basically oily material in a solid form that repels water,” says Patel. “So that’s primarily how you build material on the lashes to make them longer and thicker.” Properties of the wax also affect how long wearing the formula is, as well as its creaminess (and thus how many layers you can apply with varying amounts of ease). Use of harder, more rigid waxes will actually curl your lashes as the formula sets. Scandaleyes is able to avoid the clumpiness of most volumizing mascaras by using a gel-cream formula that features a patented polymer technology the brand is the first to bring to market.

The polymer, Patel tells me, is everything. Since I spent my last chemistry class debating the merits of Lindsay Lohan in Mean Girls, he offers this primer: “A polymer is a general term for something made up of many smaller units.” The one Rimmel London developed is multi-functional, which means it’s made up of units that are normally separate. Because the polymer has wax already built into it, not as much of it is needed to increase volume. This allows the brush to comb through the lashes, separating them from one another before the formula dries (ergo, no clumps). It also evenly disperses black pigment through the formula, giving the product its fluid texture and lacquer finish. “The shiny effect is normally not there with mascaras that have a lot of wax,” says Patel. “They are usually matte or grey looking.”

In the campaign, Delevingne plays a secret agent tasked with avoiding capture by a crew of suited men in aviators chasing her through St. Pancras station – presumably it’s a sweaty pursuit, but her makeup remains intact. In order for the mascara to be granted long-wearing and smudge- and humidity-proof status, Rimmel London puts the formula through a sauna test, as well as consumer testing in every type of climate. The polymer (it always comes back to the polymer, says Patel) encapsulates the pigments and other materials, repelling most of the moisture and humidity. (Note: Jumping into a pool is beyond the limitations of the mascara. For that, you need to go fully waterproof.)

When I ask Delevingne if she’s typically good about removing her makeup at night, she says she tries: “Obviously, I’m not going to lie. There have been occasions when I just have to get to sleep as quickly as possible.” Later that night, there’s a launch party at Kachette, a former railway station, where English rapper Lady Leshurr—there at Delevingne’s request—stands under an imposing brick archway and dedicates a song to exactly those kinds of moments. “This is for the girls who don’t take their makeup off and go right to bed,” she announces to a crowd of beauty editors and influencers before launching into the track “Queen’s Speech 6.”

As Delevingne leaves the event, I get another look at her makeup. It appears just as it did when we spoke six hours earlier. Hopefully she’ll take it off before bed, but even if she doesn’t, there’s a good chance it will look fine in the morning.

“British-girl makeup is quite effortless,” says makeup artist Kirstin Piggott, who has also worked with Rimmel London faces Kate Moss and Rita Ora. “The general London girl likes a bit of a rock ’n’ roll thing. It’s funny, my hairdresser friend in New York is like, ‘What is it with you English girls not even wanting to brush your hair?’” For Delevingne, British beauty is more of a mindset than an aesthetic. “I think it’s about being unapologetic and unafraid,” she says. “We are willing to push boundaries and break the rules.” 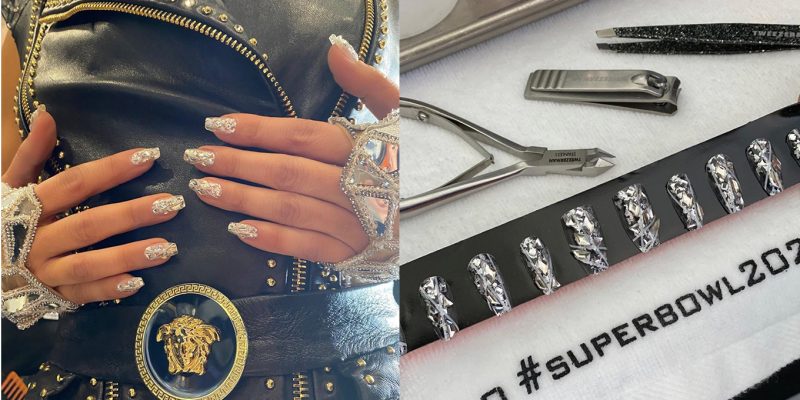