I did not expect to bond quite so hard with Blake Lively last night. 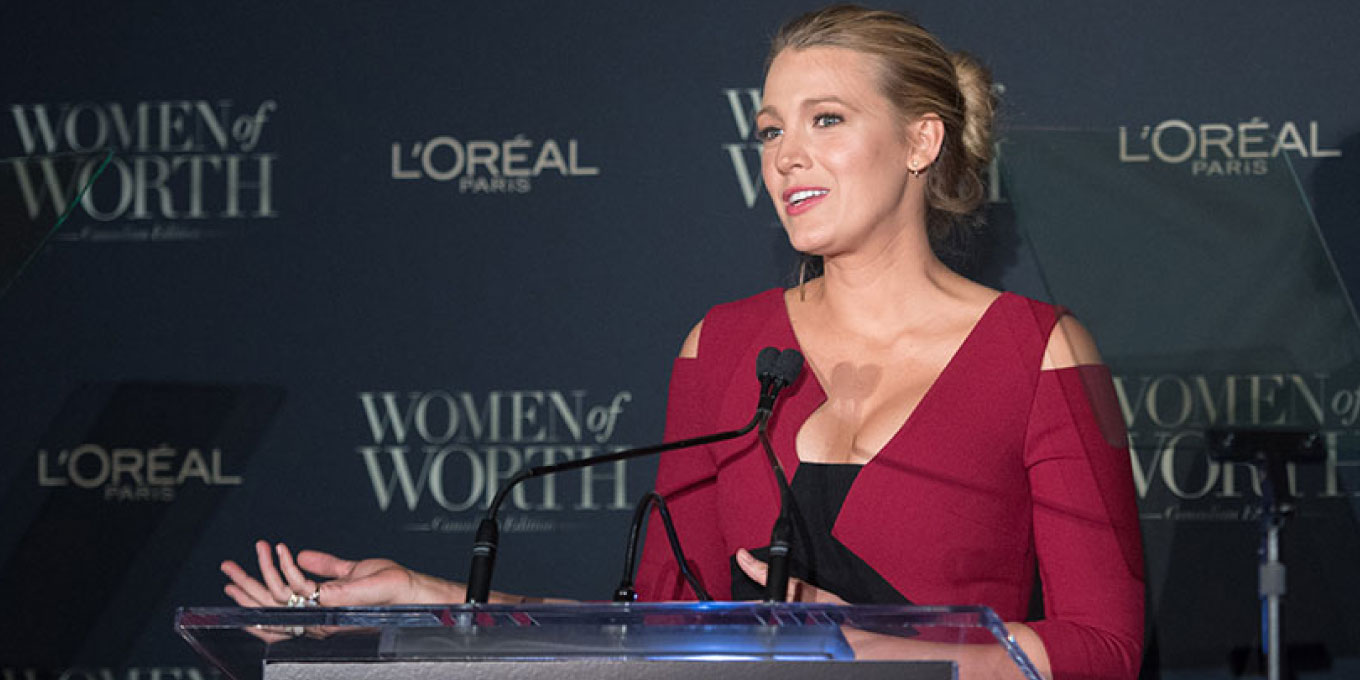 When I enter the hotel suite at the King Edward Hotel in anticipation of my interview with Lively, I walk past a pair of strewn 4 inch embroidered Louboutins—and am surprised to see her casually seated on a velvet couch, wearing a plaid shirt, diamond hoop earrings and jeans, leopard print loafers—clearly a less painful shoe change occurred. A breast pump is whirring beside Lively, who is tucking into a poké bowl and smiling from ear to ear. I have never felt closer to a stranger who also happens to be an A-lister.

Lively, she of Gossip Girl, Age of Adaline and Sisterhood of the Traveling Pants fame—and who happens to be married to blockbuster husband Ryan Reynolds—was in town to host the L’Oréal Paris Women of Worth Gala. The event, which honours women across Canada who are driving awareness about causes, was as heart-warming as my chat with Lively, who, by the way, was so well-researched about each woman’s charity that she didn’t use the teleprompter when she got on stage—actual quote: “I’m not going to read that, so you don’t need to keep rolling it.”

But back to the breast pump. Lively is pumping because she’s breastfeeding her five month old daughter, who is in New York, where Lively and Reynolds live, and maybe because of that, we skip the small talk and launch straight on to the topic of mothers judging other mothers for how long they do (or don’t) breast feed.

BL: It’s so funny how that changes where you’re like everybody congratulates you for breastfeeding all the way up to a year and then if it’s like 13 months people are like, ‘euuuhhh.’

KF: It’s true, and after that, women feel the need to bury it….

BL: Why is that, though?

KF: It’s actually the worst part of becoming a mother, in my opinion. It’s the biggest slap in the face because this is when you need other women most.

BL: I mean, it’s because everyone’s just scared. Everyone wants to do it right. So they just sort of lash out at other people because they’re scared. Because if someone is doing it different than they are, then maybe I’m doing it wrong. I think it all comes from that. But, you know, it’s sort of hard to…

KF: It comes from that place of like everyone just wanting to do the right thing.

KF: Well speaking of International Women’s Day. I saw that you were at the Women’s March in New York City in January.

BL: It was incredible to see women of all ages and backgrounds and to women who’ve walked decades before with all of these little girls. But I saw just as many men there as I saw  women. We saw people come together for something that they’re passionate about, something they believe in that was full of positivity.  And it was a shame to see anybody turn into something else, you know? I didn’t look at that as a rally against anything or anyone. If it was against anything, it was against inequality, but it doesn’t boil down to any one person. It doesn’t matter who is our president, because there are enough people who are not valuing women enough. Of course it matters for a president. But if you eliminate one person, it doesn’t suddenly cure the inequality issue with women or it doesn’t cure sexism. Of course it matters who is leading us, but it’s not the entire answer, that’s not the full solution.

KF: It’s such a nice reaction to all of the doom and gloom that sort of followed that news to know that okay we can come together in a different way.

BL: And actually create change. You look at the different rallies that have happened and outcome and it’s pretty cool to see wow this actually does something, you know? It’s neat.

KF: Switching gears to your career and varied resumé, I want to know, when you’re approaching a new project, what are you most focused on?  What are some of your major criteria?

BL: I’m always looking for women that challenge me, so it doesn’t matter if it’s the only person in every frame of the movie or if she’s in one scene. Sometimes it’s women that I really understand and connect with and sometimes it’s women that I’m really baffled by and I don’t understand at all and that’s why I want to jump into those shoes. It’s sort of what we talked about in the beginning, about women who judge you as a mother, so in order not to be hurt by that, you have to say, ‘okay, why are they feeling that way? What is it in them that makes them feel that way so that I can understand and try to sympathize or hopefully empathize?’ [Finding an character like that] is just as exciting as finding someone I relate to.

KF: That’s really interesting. What about beauty advice—what is the best advice you’ve been told, whether it was when you were growing up, from makeup artists that you’ve worked with on set or in the fashion world?

BL: I always connect with makeup artists who don’t try to make me look like someone else or force a beauty trend on me. When I have a bunch of makeup on, I don’t feel like it’s accentuating me. But it’s all sort of subjective. It’s always about the people that try to bring beauty from underneath and pump it out rather than people try to cover what’s there and create something different, a different illusion.

KF: So what is your beauty aesthetic? You tend have a specific makeup look. I know you experiment with darker lips, but you tend to wear more eye shadows and then keep your lips and the rest of your face fairly neutral.

BL: Yeah! No, I know. See I didn’t realize that I wear more shadow than lip, because I actually really like the lip. You know, I was told I have heavy lids, I thought, ‘Oh, okay, I have to always deepen them.’ And when I don’t, I feel a little bit like, ‘Ohhhh they’re like weighing down on my eyelids and it doesn’t look as pretty.’ But yet I see other people that have “heavy” lids and I think, “Wow, they’re so beautiful. They look like sleepy, seductive eyes,” but I think that doesn’t look like that on me. It’s just because someone told me that one day and I gained an insecurity. So that’s why I wear more eye shadows because I feel like sculpts and cuts my heavy lids. I’m so stupid. Or, I feel like I have thinner lips so I don’t want to wear dark colours. Even though I love a bright lip, on me it doesn’t I feel like as rewarding as on someone like Angelina Jolie who’s got this big pout, you know? So it’s not really a conscious [decision], like, “I really like shadow” and “I really like lipstick.” It’s more about my own securities and insecurities.

KF: We all have them. What’s your dream city and the most indulgent beauty treatment you’d have if you went to that city?

BL: New Orleans. And the most indulgent beauty treat would be a peanut butter bacon burger from Yo Mama’s [laughs] because that is so good and it’s at this dive bar and it’s pretty incredible. I don’t really know if they do beauty treatments in New Orleans, I’m sure that they do, but all I know about that city is food and music and it’s right across from a preservation hall, which is one of those amazing places to see jazz, so I think that’s sort of just like a beauty for the soul moment. You have a peanut butter bacon burger and go watch jazz at the preservation hall and walk down the streets of the French Quarter. It’s pretty good.

KF: So you’ve been a few times…

BL: You have to go to Creole Creamery. Stein’s Deli has the best sandwich you will ever have in your life. Get the Rachel.

BL: And then Lilette was one the best dinners I’ve ever had.

KF: And aren’t the beignets a thing there?

BL: Yeah, the beignets are a thing, which they are amazing, but the food scene is so much bigger and better. It’s like being like, oh, Canada, poutine.

This year’s Women of Worth Honourees are Abirami Kirubarajan with Multicultural Youth CAN, Audrey Guth with Nanny Angel Network, Betty Lorraine Cornelius with CANGRANDS, Cheryl Perera with OneChild, Deanna McCarron with Kidzact, Eva von Jagow with DueNORTH, Kirsten Bourque with Street Feet at Sunshine House, Lia Grimanis with Up With Women, Nayiri Tavlian with Hay Doun, and Sheliza Kassam with Children’s Birthday Miracles.

To read more about the inspiring minds stories behind Women of Worth, visit womenofworth.ca 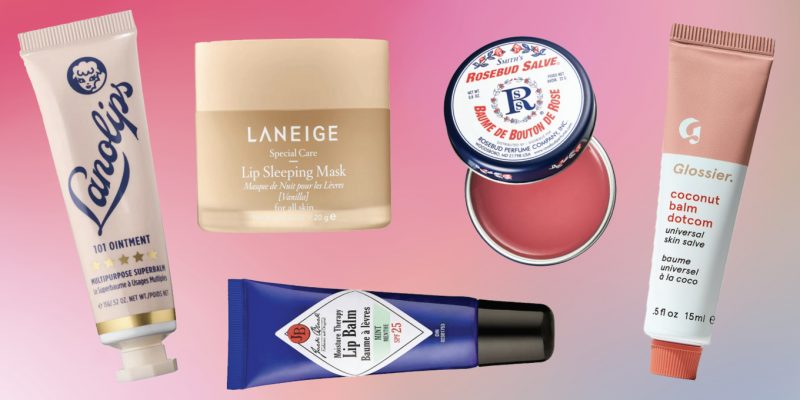