Beauty lesson: The story behind a perfume

Choosing a fragrance is more that spritzing a bottle in the air. ELLE Canada learns how perfumes are made and what stories they possess. 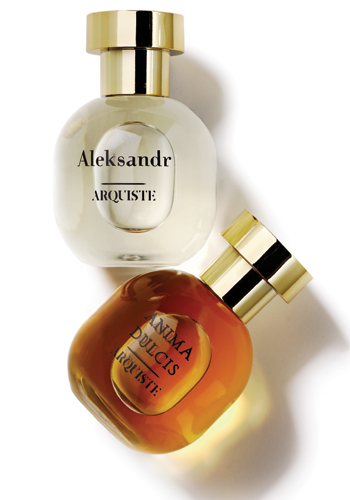 Want to win me over? Tell me a good story. At any dinner party or social event, you’ll find me curled up like a cat at the foot of a master storyteller, taking in every plot-twisting detail. I love to be transported, and I love to dream. Today, I’m in my element.

I may be having lunch in Toronto, but thanks to Carlos Huber, the founder of Arquiste fragrances, I’m lost deep in an olfactory history lesson set in the Royal Convent of Jesus Maria in Mexico City, 1695.

I’m being told about, in detail, the layout of the courtyard and the church with its gilded altars, where the odour of incense and cedar beams mixes with the cooked-clay floor and the saltiness of the stucco and rises up to mesh with the sweet jasmine growing in pots outside.

In the kitchen, the wealthy, aristocratic nuns work with baroque recipes, mixing chocolate with cinnamon, chilies and jasmine. The result: Anima Dulcis Eau de Parfum, a complex "baroque gourmand" that combines those floral, woodsy and culinary notes in a wonderfully smoky, sweet and fiery combination. Huber, a history buff, creates these precise snapshots of moments in time using his background in architecture and historic preservation.

His collection of seven fragrances references moments from Calabria, Italy, in 1175 to the indulgent L’Opéra-Comique era in Paris circa 1899. For Rodrigo Flores-Roux, senior perfumer at Givaudan (Flores-Roux worked on Arquiste with fellow noses Yann Vasnier and Huber), this project has been a true labour of love, not least because of Huber’s commitment to story.

"Usually when we get a brief for a perfume, it’s ‘We want it to be sexy…and maybe the colour is pink,’" says Flores-Roux with a laugh. "Carlos walked in with a huge book full of details, right down to the desired ingredients – 90 percent of which made it into the perfumes. It was so much fun."

Flores-Roux mentions another man who has a clear idea of his fragrance stories: Tom Ford. The designer has worked with Flores-Roux on several of his Private Blend perfumes, including Neroli Portofino and Jonquille de Nuit. Though he won’t reveal much of the direction he received from the notoriously protective and private Ford, Flores-Roux says that there is always a very strong vision.

"Tom challenges you," he explains. "He’ll say ‘I want this to smell of money’ or ‘When I smell this, I want to know I kissed the sexiest person at the party and they have a manhattan in their hand.’"

Learn more about how perfume is made on the next page…

When I ask perfumer Kilian Hennessy about the importance of story in the fragrance-creation process, he says he finds it preposterous to work without one.

(Hennessy is a man with a compelling story of his own: He is heir to a long line of cognac manufacturers and the grandson of the founder of the Moët Hennessy Louis Vuitton group. He worked at the fragrance houses of Christian Dior, Paco Rabanne and Giorgio Armani before making his own perfumes.)

"Can you imagine a movie director choosing actors without knowing what the story is?" he asks, his voice incredulous over the phone from Paris. "Or Mozart composing music without knowing the theme? A great perfume is a great story long, long before being a beautiful or effective harmony. I wouldn’t even know where to start if I didn’t have a theme or an emotion that I needed to capture. The perfume can only come second to that."

Hennessy based L’Oeuvre Noire, a 10-story collection of eco-luxe scents, around French literature and its themes of love and prohibition.

This spring, he launched In the Garden of Good and Evil, three elegant perfumes that work off a contemporary metaphor of the Garden of Eden, a narrative rich with ideas to draw from. "Good and evil is a classic theme in the art world," he says, "and I wanted to represent it in perfume."

In the sultry Good Girl Gone Bad, Hennessy achieves this with a hyper-feminine jasmine note that descends into musky moodiness with the addition of tuberose, narcissus and amber – it’s like wearing a soft, cozy cashmere sweater with a fire-red lace bra underneath.

The nose-as-novelist mindset also shows itself at Hermès with master perfumer Jean-Claude Ellena, who actually refers to himself as a "scent writer."

What does he write? Fables like my oft-worn Un Jardin Après la Mousson, which Ellena conjured up from the idea of Kerala, India, after an intense rainstorm has washed away the stale, dry earth. It smells quietly refreshing. Delicately spiced, cool and citrusy, with notes of ginger, vetiver and coriander, it’s a second date summer picnic on cool grass.

Ellena chooses to "write" with a limited number of ingredients when deciding on notes for a perfume: 200 out of the more than 1,000 a perfumer can choose from.

In the case of the Hermessence collection, which he defines as his haiku, he used just 20. In a revelation that rings true for all creative types, Ellena admits that he suffers from that all-too-familiar ailment, writer’s block.

"Creating a fragrance takes the same approach [as writing]," he says. "I know what it means to have a blank page with no ideas and to say ‘Shit! I have no ideas!’" It seems to come down to the search for a connection. Nathalie Grainger Bradbury, author and perfume expert, says that storytelling is of "paramount importance" to the success of a fragrance.

"Hearing a personal story while you close your eyes and smell a perfume is very different from spraying something on and just being told ‘This is interesting because it has rose and citrus in it.’"

This and Huber’s parting words are on my mind as I head back to the office. "The best perfumes always connect with your personal stories," he told me. "You go back to these other worlds that are completely separate and distant from your own and realize that we’re all connected."

Brimming over with tales to tell, I spray Arquiste’s Aleksandr Eau de Parfum on everyone at work and share the perfume’s origins: An infamous Russian poet (oft prone to emotional outbursts) is caught in a duel defending his wife’s honour. You can smell the violet and neroli he dabbed on when dressing, his musky body heat against the cold air, the smoke wafting from the pistol, the earthy-green scent of the fir needles crushed under his leather boots in the forest…. My colleagues are rapt.

I have become the oratory snake charmer I always wanted to be – well, at least until the scent wears off.

Olfactory orators
Fragrances can act as historical reference points. Author and perfume expert Nathalie Grainger Bradbury cites the beginning of the 20th century through the 1920s as a key period for perfume references.

"They started to embody the idea of a woman having independence, being a sexual being, living in a world of men that had been torn apart by war," she explains. One example is Nina Ricci’s hugely successful L’Air du Temps, designed to capture the post-Second World War spirit of peace, love and freedom.

The most famous scent in the world, Chanel No. 5, was created when designer Coco Chanel wanted a perfume that would complement the modern 1920s.

The game-changing abstract floral was an instant success at launch and hit critical mass when screen legend Marilyn Monroe confessed to wearing nothing but a few drops of it to bed.

Some fragrances are iconic because of their love stories and the connection we make to them. Mitsouko, by Guerlain, was inspired by the story of an impossible romance between a British officer and a woman named Mitsouko who was married to a Japanese admiral.

During the war between Russia and Japan in 1905, she battled with her feelings as she waited to see which man would return to her.