Hermès finds a perfect yin-yang balance with its new colognes. 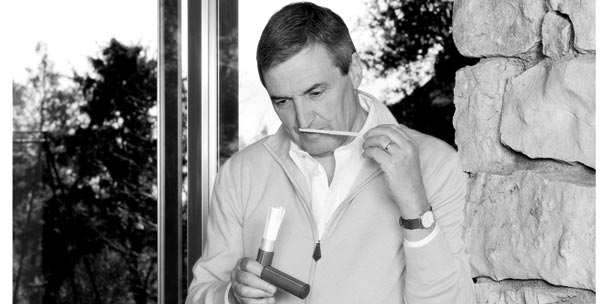 Jean-Claude Ellena may just be the perfect perfumer for these, ahem, interesting times. To give a nod to Hermès’ equestrian heritage, the metaphorical stallion named “More Is More” — the one we rode so hard over past decades — has been put out to pasture and replaced with a steed called “Less Is More.” Ellena, the in-house perfumer at Hermès since 2004, captures this new mood using techniques that may single-handedly reinvent modern perfumery.

One of his early successes — aptly named “First” — for the jewellery house Van Cleef & Arpels in 1976 contained 160 different ingredients. In 1992, he created Eau Parfumée au Thé Vert for Bulgari with fewer than 30 ingredients. And today, several of his fragrances for Hermès contain no more than 20 essences. “I keep editing formulas until I can’t take out anything more without it collapsing,” explains Ellena. While part of his bright energy can be attributed to living the good life in Grasse, the perfume capital of France, working for the family-run Hermès must be a boon. For every fine perfumer dogged by a marketer to churn out trendy olfactory products on tight deadlines and budgets, Ellena must stand out as a beacon of hope. “I don’t get marketing briefs,” he says, laughing. “At Hermès, you could say that we have an anti-marketing brief: We make an offer to the market; we don’t answer to the market.”

At the start of every year, Ellena cracks open a new black Moleskine notebook, where he jots down ideas and formulas for fragrances. There are four fragrance “territories” at Hermès: Hermessences, “novel” perfumes, “garden” perfumes and colognes. Hermessences, which are sold only in Hermès boutiques, often contain the rarest ingredients and, therefore, are made in very small amounts. Novel perfumes tell a story and refer to the imaginary world of Hermès, whereas garden perfumes are tied to the annual Hermès theme. On the other hand, Ellena says that creating colognes is “like a contact sport — an accord that expresses a lot.” This summer, he has created two of them — Eau de Pamplemousse Rose and Eau de Gentiane Blanche — to join the illustrious Eau d’Orange Vert. Ellena revels in his well-earned successes. “To be a great perfumer, you need three ingredients: humility, imagination and will,” he explains. “And you can’t be a good perfumer before you’re 45 years old because, until then, you’re plagued by small doubts.”

•Eau de Pamplemousse Rose is created from Turkish rose, orange essence (also found in Terre d’Hermès) and rhubofix. This grapefruit fragrance — which is actually free of grapefruit — is both fresh and sensual, with the rose scent lingering after the citrus fades.