A case for more is more. 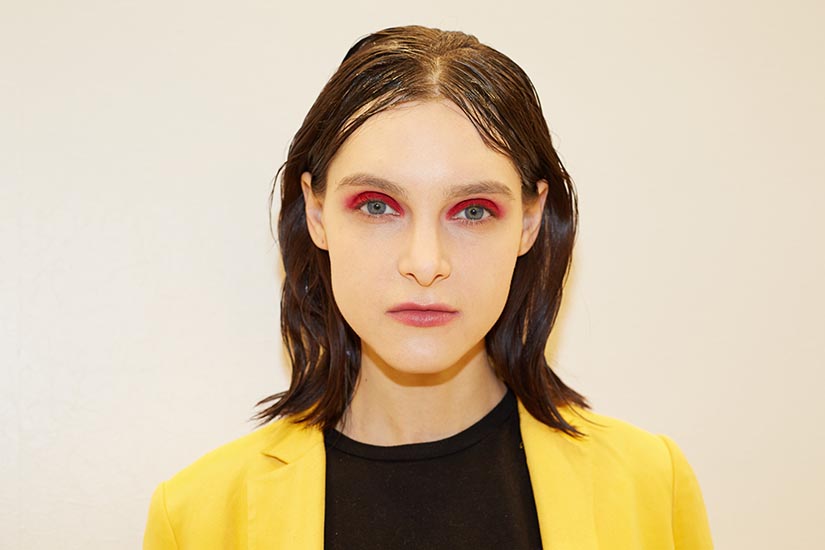 Being backstage at Toronto Fashion Week is both fabulous and chaotic. Models and makeup artists are stationed in front of large tables packed with everything from brushes and tissues to lipstick bullets and eyeshadow palettes. In one corner, Melissa Forest, a nail artist with Tips Nail Bar, is using neon green polish to create the look for the upcoming WRKDEPT show. In another, Simone Otis, lead makeup artist for beautyBOUTIQUE by Shoppers Drug Mart, finishes a holographic makeup look for the Tara Rivas show.

We caught up with Otis to learn about two of the looks she created for the three-day event.

To match the anime-inspired vibes from Elsaesser’s collection, Otis used a handful of brightly coloured eyeshadow. “We’re doing that prismatic, [Yayoi] Kusama feel,” says Otis. “Hayley wanted to do ‘alien,’ so that’s happening all over the face.” Otis used the Urban Decay x Kristen Leanne Eyeshadow Palette and Shiseido Paperlight Cream Shadow in Yamabuki Yellow on the temples and forehead to create this holographic look.

One of the beauty looks at Hayley Elsaesser.
Image by: Bryan Huynh

Not every model in the show was given the same look. “I drew bottom lashes in round circles because it felt more feminine to do it like that,” says Otis of the eye makeup. To achieve a softer look, she used the Stila Stay All Day Waterproof Liquid Eye Liner in Midnight Blue rather than black. For those perfectly scalloped edges, follow the eye’s natural shape with the liner, says Otis. Start with smaller circles, making them a bit bigger as you move toward the outer corner.

More of the beauty looks at Hayley Elsaesser.
Image by: Bryan Huynh

The wet look made an appearance at Andrew Coimbra’s show—and it wasn’t just the hair. To complement the shiny, reflective pieces in Coimbra’s collection, Otis decided on a red glossy lid. “I think anyone who’s interested in makeup has always been fascinated with glossy lids,” says Otis. Primer is an absolute necessity to prevent the pigment from moving. Otis used Urban Decay’s Eyeshadow Primer Potion before applying Stila Stay All Day Waterproof Liquid Lipstick in Beso.

The beauty look at Andrew Coimbra.
Image by: Bryan Huynh