A Comprehensive Guide to Fenty Beauty

Everything you need to know about the making of Rihanna’s debut makeup line, Fenty Beauty by Rihanna. 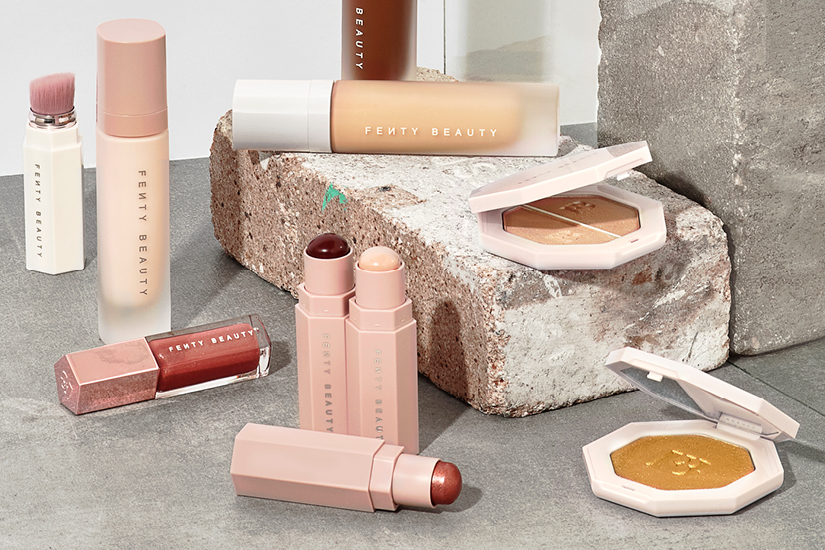 As a beauty editor, I sign embargos like other people sign credit card receipts. I have been sworn to secrecy about numerous product lines, but never has one felt so under lock and key as Fenty Beauty. (When I previewed the launch back in June, there were items from Riri’s tour rider present, and I’m still hesitant to tell you what they were.)

I was introduced to the collection by Erin O’Neill, head of brand for Fenty Beauty, and one of about seven people working on the line with Rihanna since September 2015. The nearly two-year endeavor resulted in 91 products, all set to launch in-stores and online in 17 countries on the same day at the same time, making it a truly global launch. It’s a massive undertaking, and according to Fenty, an industry first; no new beauty brand has ever launched globally before. For Rihanna, international availability was imperative. “She said the product needs to be as accessible to as many people as possible,” says O’Neill, who notes that over 80% of Rihanna’s 81 million Facebook fans live outside of the U.S.; Europe has the same number of fans as the U.S. and Canada together.

Here, the surprising focus of the line, the packaging (not even Riri is immune to the allure of Millennial Pink) and the tongue-in-cheek story behind one of the best-named products.

The line is permanent.

“Rihanna really likes to keep people guessing,” says O’Neill. “When you think about celebrities and a lot of what you see in the beauty space, it’s typically limited-edition collaborations, and they are typically in the lip category.” This collection is currently neither of those things — though they will be launching lip products (in addition to other items), you won’t have to wait long for them. “Rihanna won’t launch things in the way or with the timing you would expect.”

The line is complexion focused.

In an initial meeting, Rihanna told the product development team that the first item of makeup she ever wore was foundation. Growing up, Riri wasn’t allowed to wear makeup; it wasn’t until she participated in a beauty pageant in Barbados that she first applied it. “She told us she loved how her skin looked [with foundation],” says O’Neill. “She never wanted to take it off.” With this in mind, the line was designed around the idea of the “Fenty face”—Rihanna’s real-life method for using and applying makeup. Think of it as three steps: apply primer and foundation as a base, add glow where needed and blot as necessary.

The line features an impressive 40 shades of medium-to-full coverage foundation with a soft matte finish. It’s not so matte that it only looks good on perfect-skinned 18-year-olds, says O’Neill, but matte enough so you don’t look shiny in photos (something Rihanna clearly knows a few things about). The formula features climate-adaptive technology that allows it to hold up even in hot and humid environments (i.e. it’s Barbados-approved).

Shade section was something the brand took particular care to get right, partnering with Sephora and ColorIQ, a scanner that reads skin tone and suggests exact foundation matches. “We looked at women coming into Sephora who were having their skin tones scanned and the system was only coming up with one or two shades of foundation that matched,” says O’Neill. “We definitely found a lot of opportunity in the very light and very deep shades, but also in-between, especially for Indian women and olive skin tones.”

SO INTERNATIONAL. Sept. 8. @fentybeauty is coming.

The packaging is Millennial friendly.

The brand colours include pinky-nude, ivory, metallic nude and iridescent white. Each item in the line has a different exterior packaging with unique graffiti-style designs, all hand-selected by Rihanna. The Fenty Beauty label itself is inspired by a label you would see on an item of clothing. “When we first met with her, she had already trademarked the name Fenty Beauty by Rihanna,” says O’Neill. “Beauty is very personal thing, and she wanted this to be from her perspective.”

There is no holographic lip.

Remember that super low-res pic of the “first” Fenty Beauty product that blew up on the Internet? Yeah, that was a hoax. There is no holographic lip in the current lineup.

Rihanna came up the majority of shade names herself.

“Rihanna constantly sends us names,” says O’Neill of the singer’s dedication to the process of selecting shade names. She recalls one meeting where Riri pitched the name “Ginger Binge” after returning from a charity trip with Prince Harry that had resulted in unfounded rumours about the pair as a couple. “She has an amazing sense of humour.”

Rihanna could moonlight as a makeup artist .

“She is an unbelievable makeup artist in her own right,” says O’Neill. “She applies makeup in our meetings, and she does a lot of her own makeup.” While on set shooting the Fenty Beauty campaign, she would apply makeup to the models. “She’s very good.”