The former supermodel and wife of rocker David Bowie shares her makeup secrets for gorgeous skin. 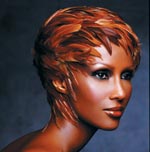 Considered a fashion icon and successful beauty entrepreneur, supermodel Iman is breaking new ground with her latest book, The Beauty of Color.

ELLE Canada catches up with the her to discuss her life, loves and passions.

ELLE Canada: Your first week in New York, from Somalia, was a budding model’s dream.
Iman: “A few days after I arrived, Peter Beard, whom I had met in Africa, gave a press conference. He had told everyone that I was a goatherd and didn’t speak a word of English and that I was six foot four! The journalists asked Peter questions in English, but soon the jig was up because I speak five languages fluently, I’ve never seen a goat in my life and I’m five foot nine! On my second day, I met Halston, who asked me, “Darling, can you walk?” Then I met Diana Vreeland, who aligned my face and proclaimed, “Now that is a neck!” And on my third day, I had my first photo shoot with Francesco Scavullo and Way Bandy.”

EC: You had never seen a fashion magazine before this, nor had you ever worn high heels and makeup. What was it like to see yourself made up for the first time?

I: “Way wouldn’t let me see my face until he was finished because he wanted to see my instant reaction. When he finally handed me a mirror, I gasped. It was a beautiful vision of me; a creature I had never seen before. When I got home I took it all off, but I knew I could do it again any time. It was like magical fairy dust.”

EC: Unfortunately you weren’t as lucky with other makeup artists.
I:“When you are a model, your photos are your currency. I was privileged to work with some of the best — Way, Dick Page, Kevyn Aucoin, François Nars — who always mixed their own colours. But early on, I had some bad makeup jobs that resulted in bad photos. No one blamed the makeup artist; they blamed the model. I had to get up to speed quickly and learn how to do my own makeup.”

Photo courtesy PenguinEC: A lot of models went over the rails in those heady days. How did you survive?

I: “My saving grace was that I always knew when to leave the party, whether it was Studio 54 or my modelling career. The business is about who is new, so if you overexpose yourself, you lose the mystery. It’s like having a romance on the side where you don’t see someone all the time but when you do, you have a great time. Now when I go out, people say I look fabulous, but if they were to see me all the time — and you know how catty the business is — they would say ‘God, she looks tired!’”

EC: Why did you start IMAN Cosmetics?
I: “In 1989, I sold my apartment in New York and moved to L.A. I knew my period as a model was passing. New girls were on the scene — Christy, Naomi, Linda — and it was time to pass the baton. In L.A., I befriended a lot of African-American, Mexican, Spanish and Filipino women who kept asking me where I buy foundation. So that’s where the idea to start my own line took hold.”

EC: Would you say you’re high maintenance — a mani and a pedi every week?
I: “Well, I wouldn’t say that’s high maintenance! Yes, weekly manicures and pedicures, deep-tissue massages every two weeks, a facial every two months, pilates, a bit of running. I just turned 50!”