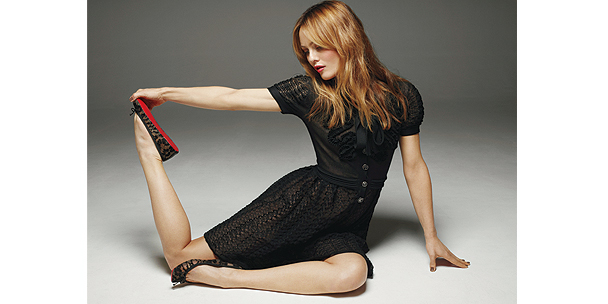 She was once a birdlike Lolita, whistling in a golden cage for the Chanel fragrance Coco. Now, 18 years later, Vanessa Paradis is still warbling for the venerable house. This spring, it’s for Rouge Coco, the new lipstick line. “The eyes are the mirror of the soul,” Coco Chanel once said. “So, are the lips the mirror of the heart?” This year, the
House of Chanel is taking its founder at her word.

“I have a blank space between my teeth, but that’s the only blank thing about me,” says Paradis, laughing. “You can hide things in your eyes, but your mouth never lies!” She is visibly happy to be playing the pretty Chanel songbird once again. “There is a certain feeling about Chanel,” she says. “You feel it as soon as you cross the threshold of the store in the rue Cambon in Paris. Something magical happens…. Working for Chanel allowed me to meet
Karl Lagerfeld. I have enormous respect for him, partly because he shows so much respect for other people.”

During the ad campaign’s photo ses­ sion, the actress in Paradis takes over. She has a very physical relationship with the camera; just ask Pascal Chaumeil, director of Heartbreaker, her upcoming film. “Apart from being very photogenic, Vanessa is, first and foremost, very phys­ical,” he says. “She moves well. The way she walks is absolutely original: She has strength and fragility at the same time. Very few actors have that instinctive pow­er. And, like all great actors, she possesses an animalistic sense of unease—moments of doubt despite her immense fame.”

And, of course, she won the genetic lottery. Her sculptural face absorbs light, even more so since she stopped smoking two years ago. “Not smoking is a real gift to my skin and my voice,” says Paradis. “She wins first place for good architecture,” confirms hairstylist and photographer John Nollet, who is a close friend of Paradis’. “She actually has a perfectly proportioned face, and she is very photogenic. She owes her charisma to the fact that she does things by choice. When she gets involved, she commits herself wholeheartedly.”

After more than 20 years in the game, the star knows what makes a good image, and she plays her part to the hilt. Whether it’s for a photographer or a director, she gives exactly what is asked for. In short, she has a penchant for storytelling, which is crucial when you are involved in mak­ ing movies. “Her confidence makes her beautiful,” says Peter Philips, global cre­ ative director for Chanel Makeup and the mastermind behind Rouge Coco. “She stares at the camera with pride. She feels good about who she is, and it shows. She can manipulate her body and her gaze. She sings and smiles, despite the gap in her teeth, and there is absolutely nothing fake about her.

“Vanessa isn’t an ordinary model,” con­ tinues Philips. “She has a partner, a career and children. She is a bit like Madonna, with the zest of Jane Birkin and something of Lauren Hutton. She’s a rock star!”