It actually seems delicious. Plus, other health news to kick off 2016. 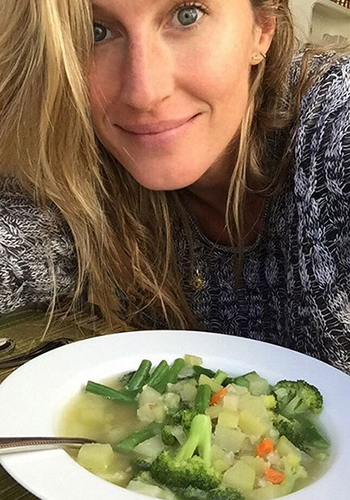 Apparently Gisele is a mere mortal after all. Despite this and this. The supe’s personal chef Allen Campbell gave the skinny on her meal plan to boston.com. And it’s really, really healthy. (I guess even supermodels have to watch what they eat.)

According to Campell, Gisele, her New England Patriots quarterback husband Tom Brady and their children eat 80 percent vegetables. “[I buy] the freshest vegetables. If it’s not organic, I don’t use it. And whole grains: brown rice, quinoa, millet, beans. The other 20 percent is lean meats: grass-fed organic steak, duck every now and then, and chicken. As for fish, I mostly cook wild salmon,” the chef revealed about the Boston-based couple.

Off the menu? White sugar. White flour. MSG. Cooking with olive oil. Canola oil. And, for Tom, even tomatoes! “It’s very different than a traditional American diet,” admitted Campbell. “But if you just eat sugar and carbs — which a lot of people do — your body is so acidic, and that causes disease. Tom recently outed Frosted Flakes and Coca-Cola on [radio station] WEEI. I love that he did that. Sugar is the death of people.”

We’ll see ya in the afterlife, I guess.

Treat yoself
Science gave us a huge gift this week. According to new research, we will eat less if we reward ourselves with a (non-edible) present during meals. Let me explain this win-win situ. During this experiment, scientists put two meals in front of people: one half-sized portion with a lottery ticket and a full-sized portion with no prize. The majority chose the smaller meal with the ticket even if there was no guarantee of winning. According to docs, our brains responds to small presents the same way thet would a pizza or burger. The only downside: while this plan good on your waistline, buying a lottery ticket every meal is not so friendly on the pocketbook.

Play nice
Forget the New Year’s resolution to lose 10 pounds. Why not make a pact to be a little bit nicer to yourself? Weight Watchers in the U.K. surveyed 2,000 women and found that most of us criticize ourselves up to eight times a day. I’ve got a feeling we’re just as hard on ourselves here in Canada.