When getting pregnant happens to everyone but you, what's the best way to go forward? 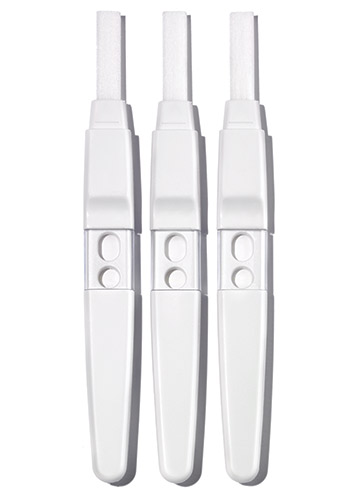 Some women say they’ve always wanted to have a baby. I used to be terrified by the prospect and, later, felt pretty neutral about it. If it happened, it happened; if not, well, I’m not sure what I thought would happen if it didn’t. Probably I thought it would be no big deal. And it wasn’t, until it didn’t happen and still isn’t happening, and now having a baby has become a very big deal.

If you tell your doctor you’re trying to get pregnant and it’s not working, she’ll ask how long you’ve been trying and, if it’s long enough and, like me, you live in Newfoundland, refer you to the province’s only fertility clinic. They will order many tests. Sometimes these tests reveal a problem; in our case, so far, they have not. I took this to be a sign that we didn’t need medical help; we just needed to try better. I didn’t want to need medical help, so this was a con­venient interpretation. I decided to take a year off from medical clinics. I bought books on increasing fertility and charted my cycle; I consulted a naturopath and an acupuncturist and gave up gluten, caffeine and dairy; I did yoga; I tried not to think about it, because this is what people tell you: Stop thinking about it. But the thing about trying to have a baby and not having one is that they’re everywhere—sitting in grocery-store carts, strolling down sidewalks, popping up on Facebook—so it’s difficult not to think about it.

Near the end of my year-long clinic break, I became obsessed with a story about a dead British baby. I discovered him in The Guardian online. At first, the details were scant: A baby had been found dead in a home in Yorkshire, his mother taken in for questioning. In time, more information was released: It was the mummified body of a child who’d been dead for almost two years that had been found in a cot in his mother’s room, “under a pile of shoes, clothes and bedding.” And although the child was four years old, he died dressed in clothes intended for a baby aged six to nine months. Later, when the mother, Amanda Hutton, was found guilty of manslaughter, it was revealed that she and her estranged partner had seven other children: two over 18 and “five children aged between five and 11…[found] malnourished, with head lice and fungal infections that had left them with missing toenails.”It was a gruesome case, and I couldn’t stop reading about it. Hutton had had eight pregnancies, eight babies.

Around the same time that The Guardian was reporting on the case of Hutton and her mummified son, a Calgary woman, Meredith Borowiec, was facing charges for leaving three newborns in the garbage. One was rescued from a dumpster, and she pleaded guilty to aggravated assault. The other two, born in the previous two years, were never found. She was found guilty of two counts of infanticide. While in custody, Borowiec had a fourth baby; it was taken away immediately.

READ MORE: The state of sex

The only details I know about the lives of Hutton and Borowiec are those reported in online-media stories. These stories are confounding and tragic; none suggest that either woman spent $60 a month on whole-food prenatal vitamins in an attempt to get pregnant.

For a while, I worried that my obsession with dead-baby news stories was unhealthy, and maybe it was, but it also made returning to the fertility clinic easier. I’d resisted going, in part, because I was afraid to tempt fate—if I were meant to get pregnant, it would, and should, just happen; who was I to intervene with drugs and doctors? Hutton and Borowiec are obviously quite fertile, but these women were no more meant to get pregnant and have children than I’m meant not to.

READ MORE: Why we’re not having sex

I returned to the fertility clinic about eight months ago. The nurses have been kind. The doctors have been helpful. I’m still not pregnant. In terms of treatment options, the next step is in vitro fertilization (IVF). IVF isn’t available in Newfoundland, so I have started the process of getting referred to a clinic on the mainland. There will be more tests, more drugs and more injections. We should expect to spend between $10,000 and $12,000.

I don’t like talking about my baby-making troubles, but trying to get pregnant with the help of a fertility clinic takes up a lot of time and headspace, so sometimes I do. Everyone seems to know someone who has gone through something similar. I get told a lot of fertility-treatment success stories. These stories used to make me feel better, but the longer this goes on, the more I think about the other stories—the people for whom there was and will be no pregnancy, no baby—because those stories exist too. Where the success stories can bring hope, the others bring sadness and, some days, despair. What I try to do now is not think too much about other people’s stories; they’re interesting, of course, and important, but they’re not mine. I don’t know how mine will turn out yet; I’m still in it.