The birth-control pill is no longer being hailed as the contraceptive holy grail. But what is? 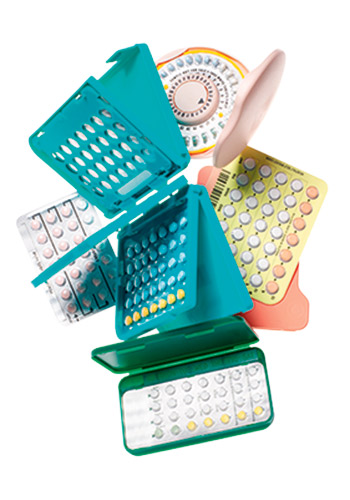 Half a century ago, the arrival of the birth-control pill marked a defining moment in the women’s-lib movement. “The pill” was positioned as a miracle drug that offered the bodily autonomy we so desperately craved. Women were free to lead dream  careers—and make their way into ser-iously senior positions—without worry-ing about a baby interruption. It worked toward levelling the playing field with men in the workplace. And there’s no denying the pill’s effectiveness (99 percent when used correctly) and convenience, without which many women wouldn’t be able to lead—and enjoy—their current lifestyles. Having control over the reproductive cycle is what women have always loved about the pill. But now, some women are turning to different ways of preventing pregnancy to regain control over their bodies. Whether they’re shunning hormones, looking for freedom from daily pill-popping or seeking longer-acting  reversible forms of birth control, a small but significant number of women are looking for change once again.

The pill is popular, but prescriptions for oral contraceptives have slightly dropped in Canada over the past five years, according to figures from pharmaceutical-industry analyst IMS Health. Dr. Dustin Costescu, an assistant professor and family-planning specialist in obstetrics and gynecology at McMaster University in Hamilton, Ont., has seen this shift in his own practice. “Those on the pill still make up the majority of reversible-birth-control users,” he says, “but that number is starting to decrease as people take up other methods, in particular the intrauterine device.”

In some cases, women are turning to natural, sustainable choices for not only their own bodies but also the planet. “Women are questioning the impact of these hormones on the earth, particularly the way in which estrogens in our water system affect marine habitat and wildlife,” says Costescu. “But as a fem­in­ist, I caution that our protection of the environment shouldn’t come at the expense of providing good birth-control options for women.” He notes that effectiveness is still the most important reason why a woman chooses her birth control. “There are great options on the market now that are very effective and hormone-free.”

This distrust of hormones is a big factor for women who are looking for alternative birth-control methods, but there are other reasons for ditching the pill. One has to do with reclaiming a sense of autonomy from the medical establishment. Critics of the pill argue that physicians in North America default to a one-size-fits-all approach to women’s health care. “The traditional practice among clinicians is that you start a patient on the pill and then if she is unhappy, you move on to something else,” says Costescu.

READ MORE: The future of sex

It’s easy to forget what a powerful drug the pill really is, because it’s so easily and frequently prescribed. “It’s basically seen as taking an Aspirin,” says Holly Grigg-Spall, the Los-Angeles-based author of Sweetening the Pill or How We Got Hooked on Hormonal Birth Control. She calls it the “sacred cow” of the medical industry, a medicine beyond reproach. So while the pill has dominated the scene for the past 50 years, word has spread about a variety of highly effective forms of birth control. Here’s what else is out there.

The IUD, a small T-shaped device inserted in the uterus to prevent pregnancy, is making a comeback in Canada. A 2009 study led by Dr. Sheila Dunn, the research and program director for the Bay Centre for Birth Control in Toronto, determined that IUD-insertion rates in Ontario have been increasing since 2001, particularly among women aged 25 to 39. “Certainly, there’s more knowledge of these devices than there used to be, and we’re putting in more of them than before,” says Dunn. Hormonal IUDs, like Mirena, pump out a low dose of progestin; copper IUDs, on the other hand, work because the copper creates a toxic environment for the sperm. Neither type releases estrogen, the hormone that’s mostly implicated with health risks such as blood clots, heart attacks and strokes. That makes them a good alternative for women worried about the health risks associated with the pill.

Note: The copper IUD can also be used as an emergency contraceptive. It works up to seven days after unprotected sex, and, unlike the morning-after pill, such as Plan B, it’s effective regardless of a woman’s weight. (Plan B may be un­reliable for women who weigh more than 176 pounds.)

The side effects of the pill have been questioned since the drug was introduced to the Canadian market in 1961. These include an increased risk of some cancers and various mood disorders and a lacklustre libido. (It’s well known that the drug alters levels of testosterone hormones that can, in turn, alter your sex drive.) Simply put: Some women just don’t want to take hormones day after day.

READ MORE: The results of our ELLE Canada 2014 sex survey

Amy Sedgwick, a holistic reproductive health practitioner, is one of those women. She ditched the pill 10 years ago due to unwanted side effects and now relies on Justisse, a fertility-awareness method that requires women to track their basal body temperature and cervical mucus. (Sex during fertile days requires backup birth control, such as condoms.) Since co-founding the Red Tent Sisters—an online resource offering education about natural birth control and sexuality—Sedgwick has seen a growing demand for information on non-hormonal methods. “We opened in 2007, and at that time the work I was doing was pretty obscure,” she says. “But now this whole topic is in more women’s consciousness.” Sedgwick believes that the pill prevents body literacy. “I knew nothing about how my body worked until I came off the pill and started learning about fertility. And I have a health-sciences degree.” Grigg-Spall agrees: “When you learn how your menstrual cycle works and what it means to ovulate, you’re really coming from a place of empowerment and informed choice. If, after learning all that information, you then decide to take the pill, that’s great.”

Many women who want to go the natural route use the fertility-awareness method, but it takes a huge amount of self-control on your partner’s part—and trust on yours—for this form of birth control to work. In 2009, 11.6 percent of women reported relying on the withdrawal method to avoid pregnancy, according to a Canadian National Contraception survey. But it can backfire: About 19 percent of couples who “pull out and pray” may find themselves decorating a nursery.

Check out the Society of Obstetricians and Gynaecologists of Canada’s public-education website: sexualityandu.ca. And make sure to bring up any questions or concerns with your health-care provider. It’s your body—so speak up.