The latest body shaping tool is a fat-destroying laser

We tried it. Here's everything you need to know. 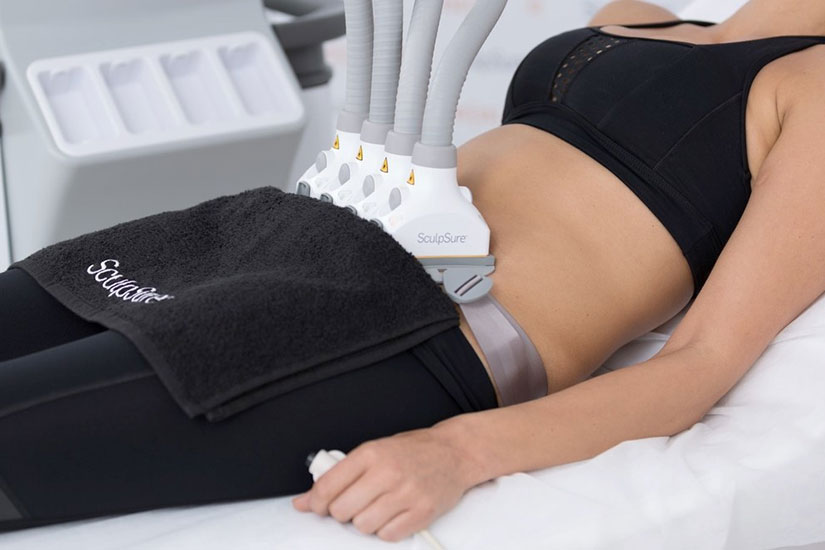 First things first: there is no entirely pain-free way to achieve fat loss — unless you consider regular SoulCycle classes and general avoidance of sugars and carbs to be pain-free. Regardless, no magic solutions exist. SculpSure, which you may recognize from a recent episode of The Real Housewives of Toronto, is the latest professional treatment device that aims to take some of the time, pain and sweat out of the fat-loss equation.

“When you lose weight through diet and exercise, what you’re doing is shrinking the fat cells—you aren’t actually destroying the cell,” explains Dr. Melissa Hershberg, who oversees all body treatments at Q Esthetics Laser Clinics in Toronto. “With SculpSure, you’re destroying the cell so it can’t come back.”

Here’s how it works: The machine has four lasers that penetrate to a depth of about 2.5 centimetres, heating fat cells to the point of rupture (between 42ºC and 47ºC) over the course of a 25-minute treatment. Once destroyed by the lasers, fat cells are released into the body, where they are filtered out through the kidneys or liver after about six weeks.

It can treat up to 24 to 30 percent of superficial fat—that’s about one to three centimetres of reduction in the squishy zone. (In Canada, it’s currently approved for use on the abdomen, hips and thighs.) SculpSure is more of a body contouring device than a weight loss tool (the treatment is not recommended if you have a Body Mass Index over 30), so don’t expect to see much movement on the scale.

The lasers operate at a wavelength that is not attracted to melanin; they pass through the skin to fat, making the procedure safe for all skin tones.

SculpSure is recommended as a series of two treatments. (Pricing varies depending on location, with treatments beginning at $2,000 for one treatment area, like lower abdomen, over two sessions.)

“Not all cells have the same threshold for internal injury,” says Toronto-based plastic surgeon Dr. Stephen Mulholland of why up to 70% of fat cells will survive the initial heat assault from the non-invasive device. Subsequent treatments will target a smaller percentage of cells that were resistant to the first round of heating.  (It’s why more than two or three SculpSure sessions on the same area isn’t recommended—you are targeting fewer and fewer cells each time.) “Some cells are more sensitive to certain stimulus than others are,” he explains.

For this reason, after two rounds of SculpSure six weeks apart, Mullholland prescribes clients a combination of other technologies, like CoolSculpting, which lowers fat cells to 5 degrees Celsius for an hour, BodyFX, a high-voltage electrical current, and UltraShape, an ultrasound technology.

“For the best possible single treatment, it’s Sculpsure,” he says, noting that it’s faster, as effective or more effective than other treatments and has the secondary benefit of providing some skin tightening. “It’s not liposuction, but it is the best non-surgical, predictable way to kill fat that I know of.”

I went to Q Esthetics Laser Clinic to try the device for myself. After filling out the requisite health forms and telling the cosmetic nurse the area you’d like to treat, a seatbelt-like strap with four-holders for the lasers is positioned then pulled tight against the body. The lasers are attached, and the machine is turned on.

During the initial four-minute “building” phase, cells are brought up to the correct internal temperature. This was the most uncomfortable part. During the subsequent 21 minutes, the device goes through cycles of deep heat and cooling (a topical chiller ensures that skin remains cool at all times, even during the heating).

I had prepared myself for a feeling of heat, but the sensation of the device working on my lower abdomen is best described as hard pinching, almost like intense cramps. Comparatively, on the side of my body (“flanks,” as they say) there was no pinching feeling, just a sensation of extreme heat.

The machine has four settings: 1.1 through to 1.4. At the lowest setting, there was almost zero sensation — but as the settings increased, so did the sensations. The treatment provider is in control of the settings, and is able to move up or down depending on pain tolerance, though it’s recommended to go as high as you can tolerate. For me, that was a 1.2 on my abdomen and 1.4 on my side. (Based on anecdotes I’ve heard from nurses who administer the treatment, the sensations people experience really vary. Some can tolerate it completely, while others, myself included, feel the sensations more acutely. Inner thigh is apparently the most painful area to treat.)

The treatment provider is not required to stay in the room with you, but they will—and having someone to hand me a stress ball and pepper with distracting questions made all the difference in being able to tolerate the device.

Post-treatment, my skin felt warm and slightly tender, but not enough to prevent me from going about my life. A few days later, I experienced walnut-size nodules (small inflamed clumps of fat in the treated area), which occurs in about 5 percent of patients. I was told to massage the area, and that they would disappear within weeks, which they did.

Six weeks after my second treatment (and just over 12 weeks after my first) I noticed a slight reduction in the treatment area, but the change wasn’t truly apparent until I compared the before and after photos taken by the clinic.

If you’re considering SculpSure, know that it’s not a fix-all. Patients need to be realistic about what can be achieved, says Dr. Mulholland. Personally, I’d do it again—just maybe with a few Tylenol handy.

UPDATE (August 2018):  Health Canada has approved a new Sculpsure device that treats double chins. Much like the SculpSure setting for the body, the SculpSure Submental laser heats fat cells to the point of rupture, permanently destroying them. Unlike the body laser, however, it only penetrates to a depth of 1.5 centimetres (versus three centimetres). The temperature is also lower, reaching a maximum of 35 degrees Celsius.

Dr. Diane Wong, founder and medical dir­ector of Glow Medi Spas—the first clinic in Canada to acquire the device—says it’s like “night and day” compared to other options in terms of cost-effectiveness, downtime required (zero) and people who are eligible to be treated (they can have a BMI of up to 43). For best results, do two treatments six weeks apart at a cost of $750 per treatment.