Stressed out? Drop the iPod and listen up: ELLE has the latest sound therapy treatments to soothe your soul

The latest mind-body treatments turn to the ancient practice of sound healing, using Tibetan singing bowls and vibrational therapy to improve your mood. 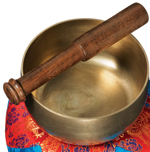 Pry away your iPod and listen up: those whispered sweet nothings might be boosting more than just your ego. Apparently, liberal doses of sound — the well-intentioned stuff rather than noise meant to distract or detract — can dramatically improve your health and mood, say practitioners skilled in the ancient art of sound healing. They point to scientific studies that claim everything from chants to speaker-enhanced beds to primal-sounding instruments make body cells vibrate at a higher level, reprogramming the mind for happier thoughts and relaxing the body enough to heal itself.

Sound therapy is nothing new. Ancient Greeks, Egyptians, Asians and indigenous cultures worldwide have been tuned in to the preventive health perks of a good vibe session. Traditional healers viewed body, mind and spirit as a single energy system, believing that sound-healing tools could chase away disease via vibration or sound-wave energy, restoring vitality and a sense of harmony between the self and the universe. Since then, the growing preoccupation with holistic healing has spawned a following for harmonic medicine, putting today’s tuning fork on par with yesterday’s yoga mat.

Singing bowls
Ethereal highs attained by striking or rubbing bowl rims have struck a chord with the general public, starting, of course, in Hollywood with the likes of Robin Wright Penn, Demi Moore and Mariel Hemingway, says William Jones, co-owner and founder of Crystal Tones in Salt Lake City. Singing bowls typically come in two varieties. Tibetan bowls contain seven metals corresponding to the sun, moon and planets and can be played against the body to restore inner balance. Quartz crystal bowls, made of silicon dioxide, resonate with crystalline and water structures of the body, such as cells and DNA, and are associated with the body’s seven chakras, or energy centres. Lora Teuschler, a sound-healing therapist based in Nanaimo, B.C., plays crystal bowls to break up energy blockages in the body, reaffirm physical-spiritual connections and in-duce deep relaxation. “If the body is stressed, it won’t heal,” she says.

Vibrational therapy
A way to transform oneself from a solo instrument into a one-woman rhythm section, vibrational therapy involves applying sound vibrations to acupressure points to clear energy blockages, restore balance, treat depression and alleviate pain. Ashley Tait, an accredited music therapist and sound healer in Vancouver, discovered the Australian didgeridoo’s mystical powers four years ago while playing the 10,000-year-old Aboriginal instrument at an extended-care centre. A muscular sclerosis patient grabbed the vibrating instrument and held it against his left arm, feeling pain diminish in minutes. Tait later played the didgeridoo against different patients to ease a variety of conditions — from arthritis to labour pains — and, most recently, to instantly relieve excruciating pain from second-degree burns. “I started out skeptical about energy healing,” says Tait, “but now I see sound as a powerful tool for transformation.”

Photo courtesy of Geoffrey RossAcutonics
For Acutonics practitioners, using the right fork is more about experiencing a date with the Divine than with table manners. Usually associated with traditional Chinese medicine, this type of sound therapy, which involves applying vibrating tuning forks to various acupressure points, is designed to release blocked chi, or energy, in particular zones or meridians of the body. Bonnie Hardy, an Acutonics practitioner in Victoria, suggests that most afflictions begin with suppressed emotions, so she uses tuning forks — each tone or frequency representing a planet in the universe — to release anger and sadness and sustain joy. Hardy says the treatments help clients overcome psychological problems, ward off disease and introduce a state of elation. “I think the forks penetrate right through muscle tissue and into bone on a cellular level,” she says.

Sound mantras and vocalizations
Once associated with earnest yogis trapped in the lotus position, mantras and chants — the repetition of elemental sounds, words or series of words — are among the oldest forms of sound therapy. Kathy Ryndak, co-founder of the Transformational Arts College in Toronto, says clients are taught to verbalize vowels, nonsense syllables and ancient sayings to supply or release energy according to the needs of various chakras. “The free expression of sounds allows them to express feelings and puts them in touch with their childlike nature,” she explains. Adarsa Chakra, a Zen shiatsu therapist in Toronto, incorporates sound mantras originating from China’s ancient Qin dynasty to release stored stress, worry and negative attitudes and restore the body’s yin and yang, or energy flow. “Heal-ing sounds help to cleanse the body’s energy meridians of impure energy caused by poor eating habits and toxic emotions,” says Chakra.