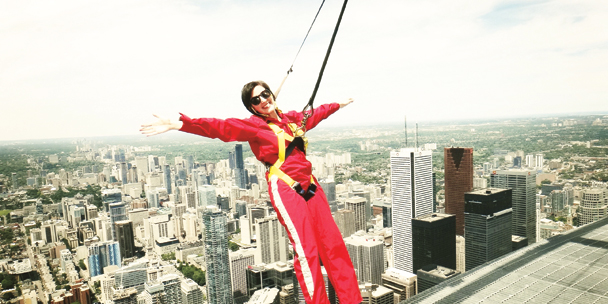 When I was little, I was terrified of learning to swim. At summer camp, I once felt so anxious about that day’s lesson that I took my swimsuit and threw it in the garbage and made up a lie that my mother had forgotten to put it in my bag. Extreme? Perhaps. But this type of response was not unusual for me, as I would do almost anything to avoid my laundry list of phobias. I have often wished I could be bold and daring, but my brain is hardwired to jump to the worst-case scenario.

This isn’t an ideal outlook for anyone who has cancer because when your worst fears morph into reality – and you can’t avoid confronting them – it’s a little daunting. After my diagnosis, I was made painfully aware that my life could be much shorter than I had planned. Many of us fear death, above all else, and we spend a great deal of energy trying to ignore its presence and its inevitability.

But in my case, walking around in a state of blissful ignor­ance was no longer an option. Everything I was doing, all the treatments and surgeries and self-torture, was done with the goal of surviving and living a long life. Yet I’m still struggling to accept the harsh – and frightening – reality that an alternative fate might be in store for me. Fear is such a crippling emotion – regardless of its cause. It’s hard to move forward when you’re intimidated by what may lie ahead. People have asked me whether having cancer has made me a more, or less, fearful person. To be honest, I don’t know, which is why I decided to face one of my other phobias: heights. If I could lean off a tower and stare at the ground 356 metres below without being petrified, I’d consider myself truly fearless. Toronto’s CN Tower EdgeWalk is touted as the world’s highest full-circle hands-free walk. For someone who is comfortable with heights, this would merely be a unique way to get a great view. But for me, this activity was essentially my worst nightmare. I brought my sister along for moral support, which turned out to be a wise decision; without her encouragement, I likely wouldn’t have even made it into the elevator.

READ MORE: How Stephanie Gilman spend a day in silence

When we arrived at the “basecamp,” I immediately had a familiar queasy feeling in the pit of my stomach. I reminded myself that I had been through much worse, barring the possibility of tragically falling to my death. We changed into jumpsuits, shimmied into harnesses and met our guide, Steven, who took us to the top and led us out onto the deck. I wish I could say I remained completely Zen, but the feeling that came over me as I looked out at the bustling city way, way below me was all too familiar: total panic. My heart rate began to spike as frantic and mostly ir­rational thoughts flooded my mind. “Is this rope I’m tethered to strong enough to hold me? Is this hook secure? It doesn’t feel secure enough! Who is this Steven guy? Why should I trust him? I wonder what falling from this height would feel like. Did I remember to turn my hair straightener off before I left the house? Why am I doing this again?”

Even though I tried to avoid looking over the edge, I did manage a few quick glances. My “bravery” was rewarded with a sudden wave of dizziness and nausea. My sister, who has no fear of heights and actually seeks out thrills, cheered me on as one would a child: “You’re doing it! You’re amazing! The hardest part is over!” But it wasn’t. When Steven asked us to lean off the edge and let go of the rope, my mind went blank and I stood in one place, quite lit­erally paralyzed by fear. After a few deep breaths, I inched my way to the ledge. I slowly turned around and willed myself to let go of the rope. Was it a thrilling, liberating rush? Did I recreate my own Titanic moment and shout “I’m flying, Jack!”? No. I simply wanted to get it over with and return to safety. I had hit the emotional pause button: Any anxiety I was feeling was contained. That’s the thing with fear: Choosing to face it doesn’t necessarily mean you will conquer it. Am I proud that I did something very far out of my comfort zone? Absolutely. Have all my fears magically melted away? Absolutely not. At the end of the day, I am still fundamentally me. And that’s okay.

Sure, I’m a bit braver than I may have been at one time, and I am learning not to let fear completely control my life. Now, I push through difficult moments instead of avoiding them. I could worry about the many question marks that lie ahead, but instead I get up each day, take a breath, put on some clothes and go live my life. That is the best way I know how to say “Screw you!” to the anxieties that seep into my consciousness and threaten to derail me. But, that said, you’re not going to see me bungee jump off a cliff or leap from an airplane anytime soon. For now, I’d rather practise being mindful and engaged in a much more comfortable position—with my feet on the ground and the sky high above me, right where we both belong.