Is Celery Juice Worth The Hype?

First kale, then avocados. The next green veggie to reach food-celebrity status: celery. 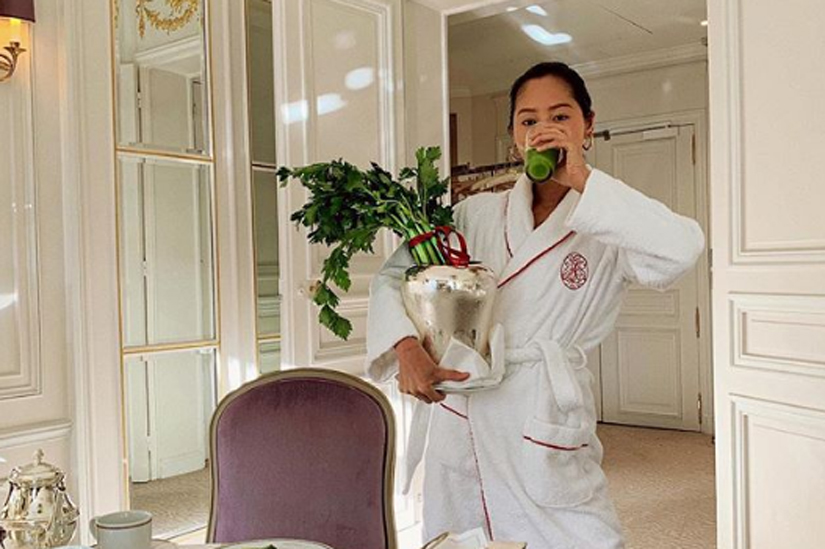 It would be pretty hard to scroll through any social media platform and not stumble across some celebrity or influencer raving about celery juice. Kim Kardashian, Kylie Jenner, Busy Phillips, Pharrell, Naomi Campbell and even Robert De Niro have all hyped the green juice. The celebrity feedback has largely been positive—although Kardashian called it “gross”—however, we all know not to trust everything you see on Instagram. So should you be drinking it? Here is everything you need to know before purchasing some stalks.

Who started the celery juice trend?

The man likely responsible for the rise of celery juice is Anthony William, the “medical medium” who coined himself “the originator of the global celery juice movement.” Although he lacks any medical or scientific certification, he is a New York Times best-selling author and claims to communicate with the “Spirit of Compassion who provides him with extraordinarily accurate health information that’s often far ahead of its time,” according to his website.

The movement peaked when he shared his celery manifesto on Gwyneth Paltrow’s website Goop, proclaiming: “Celery juice is a miracle juice. It’s one of the greatest healing tonics of all time. I’ve seen thousands of people who suffer from chronic and mystery illnesses restore their health by drinking sixteen ounces of celery juice daily on an empty stomach.”

I prefer a bucket of celery rather than bouquet of flowers. @plaza_athenee just gets me. #celeryjuicechallenge Have you tried drinking #celeryjuice every morning?

Are there any actual benefits to drinking celery juice?

There is no denying that celery is good for you. At more than 90% water, it’s a low-calorie snack that also contains vitamin K, along with a few other great vitamins and minerals. There is just no scientific research or evidence to back up the claims that are currently floating around on social media. Vladimir Vuksan, PhD, a professor in the departments of medicine and nutritional science at the University of Toronto and the associate director of the clinical nutrition and risk factor modification centre at St. Michael’s Hospital, puts it bluntly: “There is nothing magic when you look at what’s in celery,” he tells us.

While William claims there’s not much celery can’t do—including reduce inflammation, clear skin and improve digestion—there are no studies that have been done to prove these benefits, which he himself says on his website.

I love to start my day with fresh, cold pressed organic celery juice! 16oz on an empty stomach… It’s anti-inflammatory, alkalizing and honestly makes me feel so energized! My favorite breakfast at the moment is rice porridge with banana, cinnamon hemp milk and maple syrup ?

So, should you drink celery juice?

By the sounds of it, it’s not going to do any harm (except maybe leave a nasty aftertaste) but it’s not going to do too much good either—and the experts that we’ve consulted with agree that the trend is unlikely to last. “This is a fad diet,” says Vuksan. “Obviously, if instead of a North American diet of eggs and bacon you drink a juice of any kind, you are going to feel better.” It is more beneficial, he says, to eat and/or drink a variety of vegetables that contain different vitamins and minerals than it is to drink a 16oz glass of one single vegetable. A banana, some kale and a squeeze of lemon would blend nicely with celery, we think.