I joined the Raptors Dance Pak for a night

It was a complete failure, but a fabulous one. 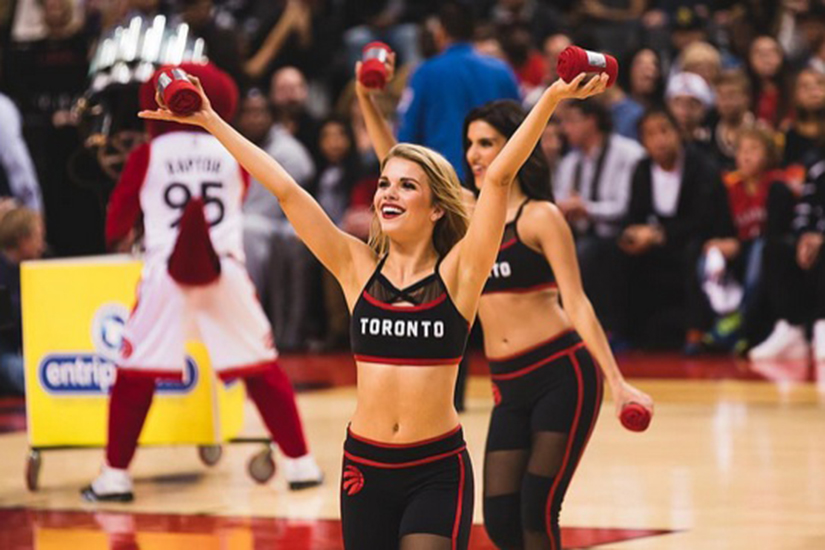 When the idea was floated to me about learning a Raptors Dance Pak routine – a riff on Amy Schumer’s danceoff with the Knick City Dancers in Trainwreck – I agreed immediately because a) who wouldn’t and b) it was so far out of my comfort zone I knew it would be a blast (or at least a good laugh for my colleagues.)

Let me explain: the most dancing I’ve done is in dark (mercifully) bars and clubs. My mom enrolled me in ballet when I was three, but apparently I spent most of my time staring at myself in the mirror. (Sorrynotsorry.) A year later, she tried to get me into jazz. I cried the first night and my parents quickly enrolled me in soccer.

Still, I’ve always had a huge respect for dancers, and that respect has grown following my workout with the spirit squad of the Toronto Raptors basketball team. These women are legit. A case in point: about 250 women try out for the team and just 22 will make it.

At our practice – which took place at a downtown Toronto gym and sadly not the Air Canada Centre with Drake cheering us on – they learned their latest routine to Missy Elliot’s “WTF” in like, 5 seconds. I, meanwhile, skipped along goofily in the front row, pretending like I knew what I was doing. Watch me embarrass myself in the Snapchat video below.

Typically, the Dance Pak has just one night to practice the piece before they perform it in front of a full house at the next game. That means they have about 30 routines in their repertoire by the end of the season, performing about five dances per game, twice a week. “I don’t even know how many laps of the ACC [the Dance Pak does] in a game,” says Dance Pak co-ordinator and choreographer Amberley Waddell. “They’re up to the 300 level; they’re down back on the court, they’re doing all promos and giveaways.”

MUST-READ: 3 Health Hacks for when it’s cold AF and you don’t want to move

So do they feel the pressure? A little, admits team captain Nina Pizans. “You have to perform and turn it on every other day of your life, and there are 20,000 eyes plus TV watching you,” she says. “Every time I step out on that court I have the same anticipation, the same nerves. It hasn’t changed, but I like feeling nervous. It gives more excitement to every game.”

READ MORE:
5 things you need to know about Souping
What is cloud bread and is it good for you?
ICYM: You’ll love Nike’s new video series Margot vs Lily
Should you press pause on your DVD workout?