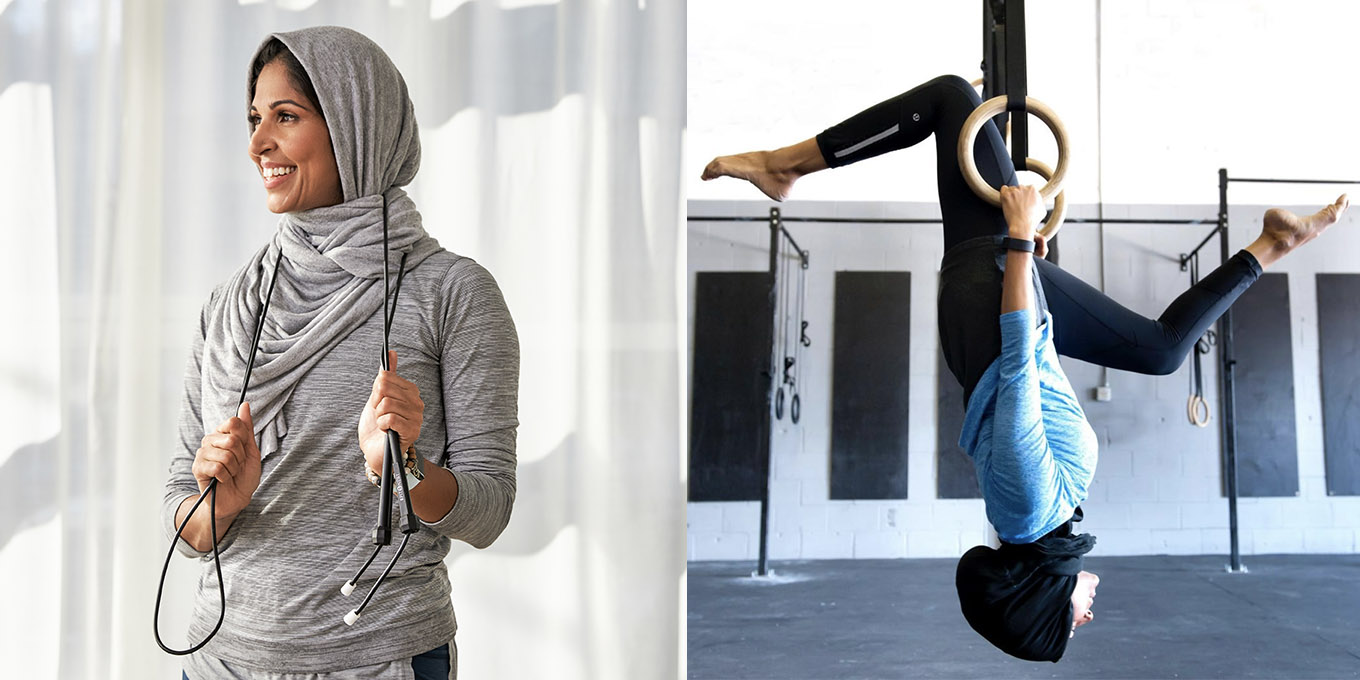 On Alibhai’s Instagram page and website, The FitNest, you can find an array of different workout routines, healthy recipes and daily lifestyle-related content. With over 129,000 followers on Instagram, it’s clear that she has solidified her path in the world of wellness and fitness. Alibhai, along with other remarkable hijabi athletes are a part of the growing movement to make the wellness and fitness world more inclusive. We reached out to Alibhai to discuss what it’s like being a hijabi fitness instructor, how she broke past preconceived notions of hijabi women and the importance of staying active during the pandemic. 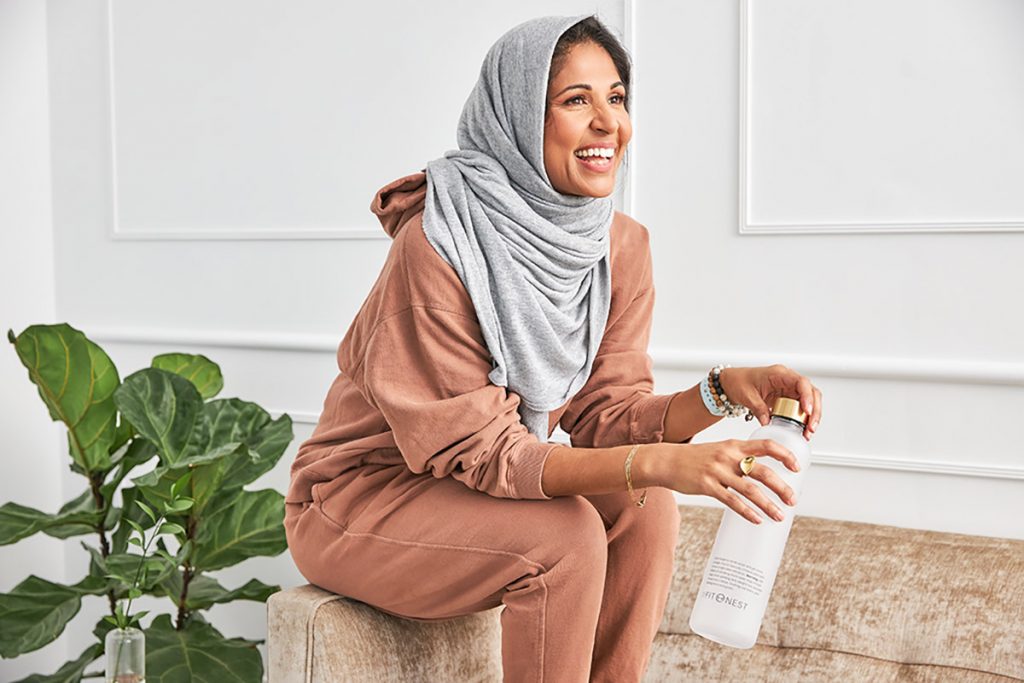 How did you get into fitness in the first place?

“Before my parents moved to Canada in the early 1970s, my dad was a physical education teacher in East Africa. He even trained with some of the Kenyan long-distance runners, and he passed on his passion for sports and his competitive nature to my siblings and I. He was always encouraging us to play sports and would take us out to our practices and coach us along the way. I carried my love of sports and health education into university where I completed an honours degree in Kinesiology. Around this time, I also started working as a personal trainer in gyms, and the rest is, as they say, history!”

What are some of the stereotypes or preconceived notions you believe people have about hijab or athletes or fitness instructors like yourself? How have you pushed past them?

“It might sound strange, but I really think in the past a lot of people just failed to understand that women in hijab might actually have the same fitness goals and motivations to be healthy and active just like anyone else. I think a lot of that had to do with representation and a lack of role models from our own community. When I first started training, playing team sports, teaching classes and taking courses, there definitely wasn’t anyone else around me in hijab. It simply wasn’t the norm and so people (both Muslims and non-Muslims) just didn’t associate hijabi women as athletes or fitness experts. From there they might have drawn their own conclusions– perhaps they assumed that women in hijab weren’t allowed to work out or that we just weren’t interested in these things.

For me, the way I pushed past these preconceived notions is by recognizing that they were just that, simply false notions and limiting beliefs based on a lack of dialogue. From a young age, my love and passion for sports was so strong and I never saw the hijab as something that would hold me back. It also helped that I had incredibly supportive friends, family and coaches, who encouraged me to play and represent myself and my hijab.

I’ve now been in the fitness industry for almost 20 years and so much has changed in that time. We have hijab wearing Olympians and martial artists. I think we still have some way to go in terms of both dispelling myths around the hijab and also helping empower women who do choose to wear the hijab to take control of their bodies and health, but it’s been so nice to see so many women take those first steps and proudly share their journeys, and doing it proudly with their hijab.” 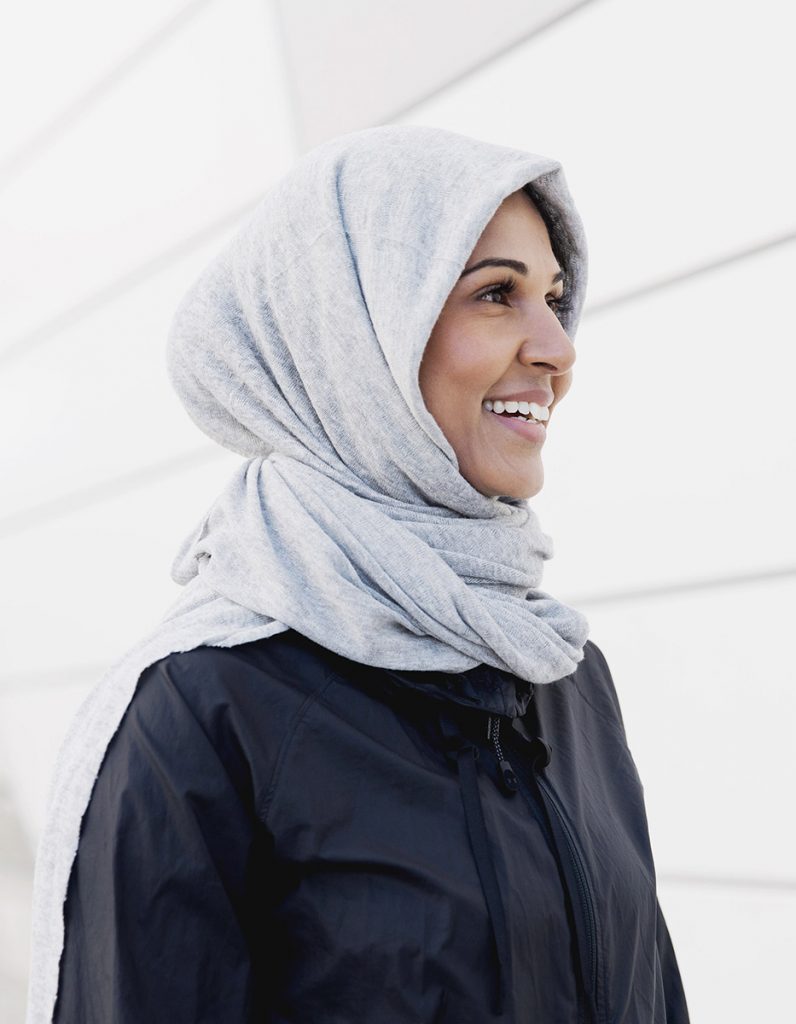 Who are some of your idols that you look up to in the fitness world?

“Growing up I looked up to a lot of female athletes. Venus and Serena Williams, Hayley Wickenheiser (a Canadian Ice Hockey Player), Dominique Moceanu (an American gymnast) and every Olympics you’d find me glued to my TV watching just about every event I could catch!”

What’s the most inspiring thing a client of yours has told you?

“I really love working with my client so much. It’s truly my passion to empower women to feel more comfortable in their bodies. I’ve had so many special moments and shared so many amazing milestones with many of my clients over the years but one client that always comes to mind is a 68-year-old woman I used to train in Ottawa. She was very weak and had been told by her doctor that she needed to start exercising to improve her health and to stay independent. I worked with her three times a week for 30 minutes sessions. It was so amazing seeing her confidence grow as she transformed her body as well as her relationship with health & fitness. Pretty soon, she was coming to each and every session with a huge smile on her face. Her willingness to try new things and challenge herself physically and mentally was simply amazing. So now, whenever anyone says they can’t be active, I always point to her as an example. Fitness is for everyone at any age, I truly believe that.”

How do you think the fitness world can further develop to better embrace hijabi women?

“I think right now, with social media, the beauty is that so many of us have a platform where we can share our passion for fitness with people looking for support and someone that they identify with. When it comes to mainstream media and the fitness world in particular, I really think that the more visible women in hijab are, the more empowering it will be to those who would like to be active and practice sports.”

Why is fitness more important than ever with the current pandemic still happening?

“I think it’s clear to most people by now that exercising regularly is one of the single greatest gifts you can give to your body. Certainly from the standpoint of optimizing your physical health, which is more important than ever. But just as importantly, there are countless benefits to our mental health, which is especially important these days when so many people are coping with fear, anxiety, stress, financial concerns, sadness, boredom and isolation.

Sadly, there are so many things out of our control right now. It’s a reminder that we should cherish whatever health we have and take advantage of whatever opportunities we have to move our bodies. It can be something as simple as going for a 20-minute walk to get some fresh air or doing a little stretch in your garden or living room. On my Instagram page, I’ve been posting lots of workouts that people can follow along with and do from home with little or no equipment. Even if you’re not used to working out, just find something you enjoy and start. There’s no better time!”

The bob is a classic hairstyle that has been trending for decades. Here are some tips for styling your bob—or to inspire your next haircut.