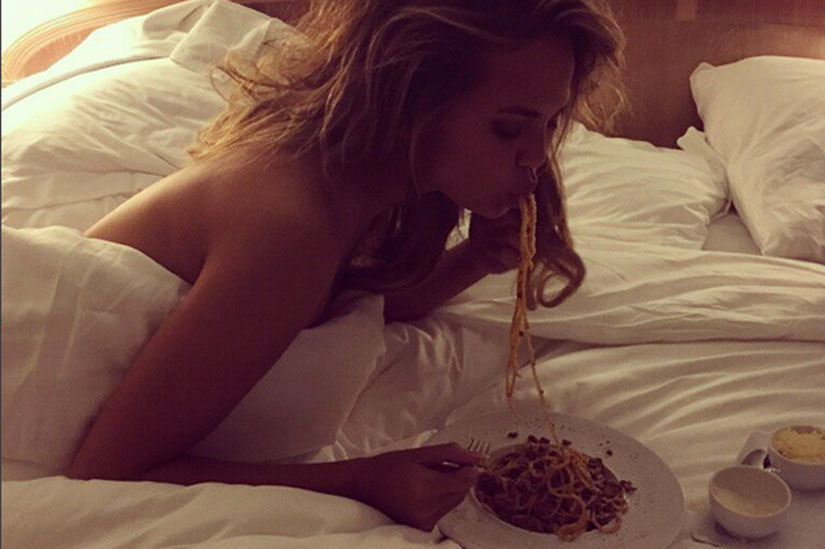 Forget that Kim Kardashian no-carb Atkins life. Instead, indulge your Chrissy Teigen. Science wants you to. Researchers from the Institute for Research, Hospitalization and Health Care Neuromed in Pozzilli, Italy studied the eating habits of 23,000 people and gleaned that eating pasta on the reg is associated with a lower Body Mass Index and decrease in obesity. .”We’re talking about a fundamental component of Italian Mediterranean tradition, and there is no reason to do without it,” says Licia Iacoviello, who leads the Laboratory of Molecular and Nutritional Epidemiology at Neuromed Institute.

Before you book back-to-back resos at your favourite Italian joint, here are some things to consider. “The study is epidemiological, meaning the researchers looked at what people eat and their weight and waist-to-hip ratios and looked for possible links,” says registered dietitian Christy Brissette from 80 Twenty Nutrition. “This is very different than doing a randomized control trial where researchers put people on a diet and then study the results. At best, we can say there is a link between eating pasta and being thinner, but not that eating pasta will make you lose weight.”

Another issue: the study was funded in part by pasta makers Barilla. (According to Mashable, the study’s authors said the company had “no role in study design, collection, analysis, and interpretation of data.”)

That’s not to say all pasta is bad for you. Like everything, it’s about portion control. (SIGH.)  “In Italy, people eat pasta in small portions and it isn’t the main meal. This is very different than the heaping portions of spaghetti being served in Canadian restaurants,” says Brissette.

She says a fist-sized amount of wholegrain pasta (about one cup) is enough to fill up most people. “This would be like having two slices of whole -grain bread… but most of us are used to eating way more pasta than that in one sitting. This can wreak havoc on your blood sugar and insulin levels, increasing the chance of weight gain. Not to mention how sleepy you’ll feel from having all of those carbs at once.”

Another key. Not all pastas are created equal. That delicious white pasta you love is a refined carbohydrate, which means it has little nutrients and promotes the storage of fat. Try whole-grain or brown rice pasta instead, recommends Brissette. “They’re packed with fibre which keeps you fuller longer, helps stabilize blood sugar and can help you lose weight and keep it off. Fibre in whole grains acts as a prebiotic, helping fuel the healthy bacteria in your gut to prevent colorectal cancer. Whole grains are also loaded with antioxidants that prevent disease.”

The takeaway: “Saying that a single food makes you fat or thin is misleading. It’s the big picture of what you’re eating over time that determines your weight and your health,” says Brissette.