Can your daily coffee hit save your life?

Plus, the health risks of sleeping in. Sigh. 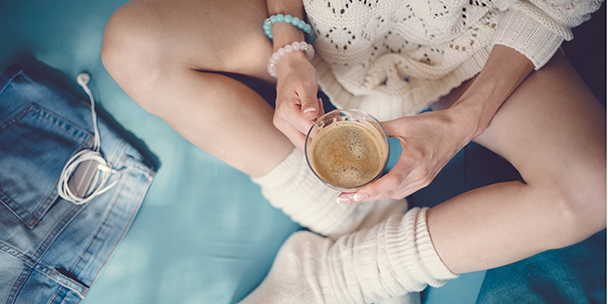 The REAL elixir of life? Coffee
The news that drinking coffee could save your life was greeted by the caffeine-addled ELLE Canada beauty department with a type of joy that only a free lifetime supply of La Prairie can conjure. Harvard scientists found that people who drink no more than five cups of coffee a day (even if it’s decaf) were less likely to die from conditions from heart disease to diabetes. As to why, it’s not quite clear, say researchers, who studied 200,000 people over two decades. Coffee contains antioxidants. It’s also thought caffeine may reduce inflammation in the body (inflammation leads to conditions like diabetes and heart disease).

He likes you, he realllllly likes you…if he eats a lot
Forget witty banter or a bouquet of flowers. Apparently the new way for a guy to try to impress you is through his stomach. New data from Cornell University suggests that if your crush is trying to make you like him, he will tend to eat more in front of you. And we’re not talking about a couple of nibbles here and there. Instead of gazing into your eyes, he’s apt to shovel up to 93 percent more food in his face. (It’s apparently a biological display of machismo.) How romantic.

The health risks of sleeping in
Those lazy Saturdays in bed might not be doing too much for your health. Disrupting sleep patterns – i.e. changing it up for those lazy, long sleep-ins – could cause a rise in the risk of heart disease and diabetes even if you’re active and eat right. This is known as social jet lag, but I prefer to think of it as plain and simple punishment.

We’re feelin’ Misty
Our favourite ballerina Misty Copeland is turning to fitness writing, with plans to release her first health book. This is the American Ballet Theater’s principal dancer’s third book – she wrote her autobiography, “Life in Motion: An Unlikely Ballerina” and a children’s book – and it will focus on training and nutritional trips for dancers and non-dancers alike. Ballerina Body is not scheduled to come out until 2017, but we’ll be sure to Snapchat the battle that goes down in the ELLE Canada offices over the copy that will be sent our way.

READ MORE:
How to work out like Kate Middleton
9 facts and fictions about cold and flu season you need to know now
Holiday beauty gifts totally worth the splurge