5 reasons you need your beauty sleep

The secret to good looks, a sharp mind and vibrant health is all in your beauty sleep, so say goodbye to sleep deprivation with these tips. 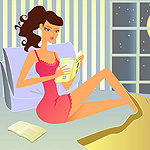 Sign up for our FREE newsletter and get the latest on fashion and beauty trends!

Shakespeare once dubbed death “eternal sleep.” Perhaps that’s why Joanne Ross says she would sooner die than endure another battle with sleep deprivation. Last spring, the 32-year-old Tsawwassen, B.C., resident became a daytime zombie when tenants in her rental home kept her awake with loud, all-night parties. It wasn’t until the revellers moved out that she rediscovered rest and peace of mind, and regained her beauty sleep. “Being tired made me feel upset all the time,” she says. “The first time I slept, I became myself again.”

Sleep problems like Ross’ (such as sleep deprivation and insomnia) are becoming as common as celebrity jail time — but the fallout is more damaging. A recent study found that one in seven Canadians — the majority of them women — routinely gets less than 6.5 hours of beauty sleep a night and, as a result, is more likely to suffer from chronic health disorders. “Sleep is vital to our well-being,” says Dr. Meir Kryger, chairman of the National Sleep Foundation in Washington, D.C., and a former director of the Sleep Disorders Centre in Winnipeg. His prescription? “If your life doesn’t let you get enough sleep at night — most people need seven or eight hours — change your life.” From fending off wrinkles to controlling your weight to improving your mood, here are five reasons why catching some shut-eye and becoming a sleeping beauty is just what the doctor ordered.

1. Pretty woman
They call it “beauty rest” for a reason: if your complexion looks dull, chances are you’re not spending enough time in bed. “An unfortunate side effect of sleep debt is that it ages the skin more rapidly,” says Dr. Lisa Kellett, a Toronto-based dermatologist. During “delta sleep” — the deeper half of a two-stage sleep cycle that repeats itself throughout the night — growth-hormone levels are at their peak, directing cells to repair damaged tissues, including skin. “Some of the damage that contributes to premature aging is repaired at this stage,” says Kellett. But when you lose sleep, not only do you miss out on this regenerative period but your cortisol (stress-hormone) levels are boosted, which can make the skin look older. If that’s not reason enough to hit the sack, consider this: “When you sleep, antioxidant repair of the skin occurs, which might reduce your risk of developing skin cancer,” says Kellett.

2. Slim shady
If you want to shed pounds, don’t skimp on slumber. University of Chicago researcher Dr. Eve Van Cauter has discovered that sleep deprivation stimulates appetite because it decreases the level of leptin (the “feel full” hormone) while increasing the level of ghrelin (the “feel hungry” hormone). Another study, by the University Hospitals of Cleveland, found that on average, people who sleep less than five hours a night are four times more likely to be overweight. The reason? People who get less sleep tend to be tired and therefore less active, so they may burn fewer calories.

Find out how to boost your metabolism with these 10 tips!How do you get your beauty sleep? Share your tips with other readers in our forums!

3. Mastermind
So much for all-night cramming: new research suggests that trading sleep for an intellectual edge is counterproductive. According to a Trent University study, students who study into the wee hours forget up to one-third of everything they learned the night — even days — before. The good news? Sleep can actually boost brain power. Dr. Jeffrey Ellenbogen, director of Massachusetts General Hospital’s Sleep Medicine Program, found that healthy 18- to 39-year-olds who slept for seven hours after performing a memorization exercise in the evening retained more information than those who studied in the morning and stayed awake for the rest of the day.

4. Body language
Warding off colds — and even living longer — may have more to do with crashing early than eating your veggies and taking your vitamins. “Sleep heightens the body’s immune defences,” says Dr. Linda Toth, a pharmacology professor at Southern Illinois University School of Medicine. “The evidence also shows that people with the greatest life expectancy get seven to eight hours of sleep a night.” Less time in the sack means more susceptibility to disease: when you’re sleep-deprived, you produce abnormally high levels of cytokines (proteins that send messages between cells), which can delay the process of healing. “Even a relatively brief loss of sleep changes the body’s ability to cope with an infection,” says Toth.

5. Happy days
Need cheering up? New research from the University of Kansas suggests that people who are the most amiable and self-possessed and have the greatest sense of purpose in life tend to sleep an average of six to 8.5 hours a night. “People who routinely sleep well are more likely to feel better about life and about themselves,” says lead researcher Dr. Nancy Hamilton. “Although it’s not clear which came first — a sense of well-being or a good night’s sleep — it probably works both ways.” On the flip side, lack of sleep has been linked to depression. Dr. Maurice Ohayon, a psychiatrist and director of the Stanford Sleep Epidemiology Research Center, says that patients suffering from insomnia and depression share similar symptoms: fatigue, irritability, concentration difficulties, dark thoughts and increased sensitivity to pain. “Insomnia can lead to a low-level depression that could seriously affect job performance or the ability to establish healthy relationships,” says Ohayon.

Wake-up call?
Kick-starting your sleepy brain used to mean sipping an afternoon espresso. Now there’s a trend toward popping pills that kill the urge to sleep altogether. Dr. Jonathan Fleming, co-director of the University of British Columbia Hospital’s Sleep Disorder Program, says that there is growing off-label usage of Alertec, a prescription drug intended to treat narcolepsy. However, using the drug can be harmful if you don’t have this condition, warns Fleming. “People already shortchange themselves on sleep, missing out on its reparative processes and other vital functions.” Kryger agrees: “The last thing we want is to see someone using this drug instead of sleeping.”

Do you have a beauty question? Ask our expert, Miss Blush!