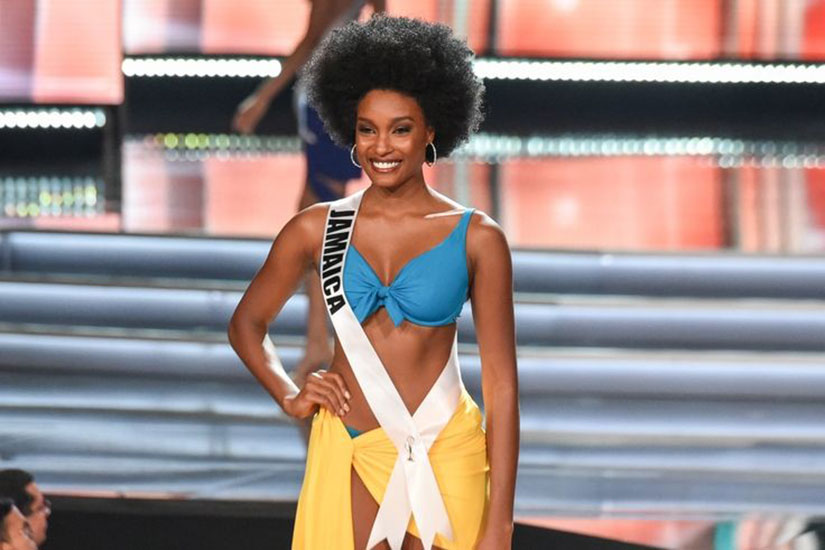 Miss Jamaica Davina Bennett might not have won the first place crown at this year’s Miss Universe pageant, but she definitely made a lasting impression.

The 21-year-old philanthropist chose to take the pageant stage with her natural hair, an afro, instead of the common blowouts and extensions we see time after time on pageant stages.

Twitter lit up with love for the natural-haired beauty and the hashtag “#MissJamaicaShouldHaveWon” was born.

“My daughter said ‘Mommy Miss Jamaica hair looks just like mine!,’” said one Twitter user. Another account spoke to the discrimination people who choose to wear their hair naturally commonly feel. “Shout to that HR consultant who said my hair was inappropriate for work, hope yuh tv turn on goodie,” said another account.

Afros and the natural hairstyles of people of color are still frequently considered unprofessional or deemed inappropriate so Bennett’s act of wearing her true hair is a statement against the norm. Bennett chose to use her platform and provide representation to the countless faces at home watching who share her natural hair texture, but rarely get to see the attribute reflected in beauty pageants.

In an interview with the Jamaica Observer before the pageant, Bennett might have hinted at her upcoming choice to wear an afro at the 2017 Miss Universe pageant. “We should allow our women to believe that they are beautiful and can fit in regardless of size,” Bennett said. “Another one is short, natural hair which I feel should be embraced more, and not ignored.”

The second-place finisher took to Instagram to thank her fans for the support and celebrate her accomplishment as the “first Afro queen who has made it this far.”

I did not win but I got what I was seeking. I won the hearts of many, I got to highlight Deaf awareness, I stand as the first afro queen to have made it thus far, I represented my little island and I received allll the love one could possibly wish for…. THANK YOU!!! I came, I conquered and if you know me, then you know that&#39;s just another story and you will be seeing a lot more from me??? To all the queens that represented, congrats and to our new Miss Universe @demileighnp go conquer the world you are indeed a gem!?? @thedavinabennettfoundation it&#39;s time to lift you up! P.S. Back on Jamaican soil early and bright a mawning!!!????♥?? #davinabennett #missuniverse #majoraccomplishment #yourjamaicanqueen #theywillrememberme

Bennett also points out in her Instagram caption that if you know her that this is “just another story” and we will be seeing a lot more of her. But in the meantime, enjoy some of the wonderful reactions to the beauty queen’s choice to wear natural hair from Twitter.

Finally, a little girl or boy out there with his natural puffy hair can turn on their t.v. and feel represented. #Jamaica #MissUniverse is doing it not just for our country, but also for the entire culture. The natural hair African goddess. pic.twitter.com/T4whrndWID

Shout to that HR consultant who said my hair was inappropriate for work. Hope yuh tv turn on goodie #MissUniverse #Jamaica

Never ever be content with someone&#39;s definition of you! Don&#39;t ever have the  desire to FIT IN ! Step into your greatness UNAPOLOGETICALLY! You can do this! Get to work! The world awaits you! #MissUniverse #Jamaica