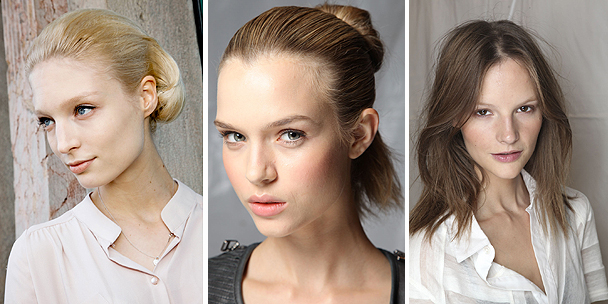 Natural, carefree beauty is a definitive theme for Spring 2012. Many designers looked to sports and beach life for inspiration, which trickled down to low-maintenance hair styles. We saw biker chic at Alexander Wang, breezy beach travellers from Isabel Marant, and smart urban dressers from Calvin Klein, Theyskens’ Theory and Marc by Marc Jacobs — all sporting easygoing hair styles. On the other hand, during every season there is room for fantasy, with intricately weaved locks adding a romantic spin to Alexander McQueen’s mythical collections. And every season, someone interprets another era with a new spin. The mid-century was well-represented by Proenza Schouler, Christian Dior and Jil Sander, all taking on their versions of a tucked-under, rolled hairdo. The runways also saw Jazz Age finger waves, complementing the prominent 1920s revival.

Wet, glossy hair styles appeared on countless Spring 2012 runways, with a carefree, nonchalance about it. At Alexander Wang, it was sporty biker girls with hair so wet, it almost appeared as though they just surfaced from the water. At Proenza Schouler, it was high-waisted mid-century chic with a disheveled, wet-at-the-roots 1950s knot. Alberta Ferretti opted for a slick centre part and almost greasy roots. Most hairstylists opted for Argan hair oils instead of gels to achieve the wet look with lots of natural movement (oils achieve the slick effect without the crunchy look of a gel).

A quintessential summer look, free-spirited surfer girl hair reigned supreme on Spring 2012 runways. Rumpled hair styles at Calvin Klein were paired with minimal makeup and sharply tailored silhouettes; at Theyskens’ Theory,
carefree hair was paired with easy style of knitwear and jeans; and at Isabel Marant, hair had a distinct beach-bum vibe. It’s perhaps the easiest trend to achieve: Place damp hair in to a bun, wait for it to dry and then let hair down. Alternatively, run a hair texturizing product through damp hair and then blow-dry sans brush, using only your fingers to style.

Thinking of going short? Get inspired with our fave short hair looks!

Continuing on from the free-spirited beach hair was Michael Kors’ messy fishtail dreadlock-like plait that appeared as though the models could have done it themselves with their eyes closed. It complemented the collection’s African safari theme. On the opposite end of the spectrum, we saw intricate milkmaid style braids at the eveningwear-oriented collections of Valentino and Alexander McQueen. Armani’s slightly tousled, side-swept braid struck the perfect balance between tidy and messy.

Spring hair trends:
The pony-bun (half ponytail; half bun)

The ponytail bun: it was everywhere. At Carolina Herrera, a perfectly slicked pony looped into itself. Ponytails were looped at Moschino Cheap & Chic, tied with raffia and ribbon to compliment the sweet flowers and fruit theme. Marc by Marc Jacobs’ pony was clipped down at the nape of the neck, creating a faux bun effect on the top and letting the rest of the hair fall straight down. Helmut Lang married two of the season’s trends by placing the models’ slick, wet-looking hair into a messy pony-bun, using bobby pins.

While messy seemed to be a dominant theme for Spring 2012, there is always room for some ladylike, prim and proper glamour. A more contemporary version of the 1940s rolled hairdos appeared on the runways of Christian Dior. Of course, there was the aforementioned oil-slicked ‘40s ‘do from Proenza Schouler. Zac Posen channeled the roaring ‘20s with glistening flapper Marcel waves, and Jil Sander brought us back to the high society 1950s with sculptured "helmet-like" faux bobs by tucking all the hair under itself.

Test out the latest celebrity hair styles with our Virtual Makeover Tool.