Hair trends: Should you get an undercut?

The edgy undercut is polarizing the beauty world. Find out if you should get a Miley Cyrus style buzz cut this season. 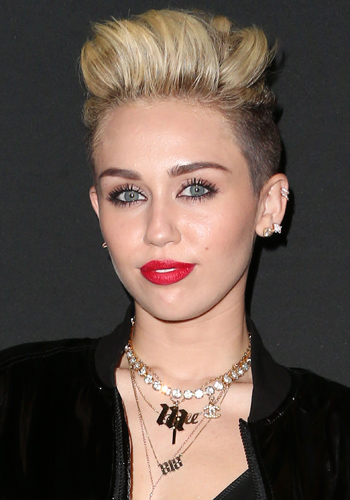 Is Miley Cyrus’ undercut an expression of female empowerment?

I’m not what you’d call experimental with my hair. Since I got out from under the grip of my mother’s scissors, it has been pretty much the same: a thick, curly mass my high-school friends would mockingly root around in for subway cars and loose change. Aside from an ill-advised pixie-cut phase, it has hovered around my shoulders in various isosceles formations, overtaken by the sheer weight of itself.

How to finally get a SHORT HAIRCUT

Yet I’m not, so to speak, in Kansas anymore. In the London neighbourhood I now call home, self-expression is less about leopard-print shoes and more about a purple rinse or a piercing. Newcomers want to rise to the occasion. Which I think would explain why I agreed when my hairstylist, Francesca Paz, at the London salon Kontakt, casually suggested we shave off the “bulk underneath.”

“Like this,” she said, flipping up a curtain of her wild orange tresses to reveal a wedge of stubble from ear to nape. Two years ago, under the influence of East London, this style seemed perfectly unremarkable—the equivalent, anywhere else, to a slash of red lipstick. Paz is the sort of ladette you can’t deny, a free spirit who later took a year off to travel South America with her tattoo-artist boyfriend before marrying him in Colombia. High on her aura, I anointed her Schick as she anointed my head with shaving oil.

How to get the perfect SHORT HAIRSTYLE

The ubiquitous undercut, popularized by David Bowie in the 1980s, was resurrected by clubbers at the turn of the millennium, made mainstream by Chanel model Alice Dellal in the late noughties and adapted by Cassie, Rihanna and Willow Smith in this decade. The shaved back or side, which looked deliciously rebellious yet somehow polished on celebs and models who could deliver the entire package with their sartorial superiority, music and dubious lovers, became slightly “washed-up samurai” on me. Whatever punk cred these women brought to the table I was unable to parlay into my own personal fabulousness. You could say I was undercut by the undercut.

But I lived with it. And, like buying a red car and then seeing them everywhere, so my world began to resemble the club scene from Desperately Seeking Susan. Stylists from San Fran to Shanghai were brandishing blades like the days of Haircut One Hundred. Justin German, coowner of Toronto salon Shagg, says he has been fielding undercut requests for nearly five years. Celeb stylist Dan Sharp, who owns Brooklyn’s trendy Danka Panka salon, says that so many of his clients have sanctioned the chop, he’s now a regular contributor to hair-loss charity Locks of Love. Today, the undercut is as big in Japan—and in hipster capitals like Portland and Amsterdam—as the “short back and sides” was to generations of 20th-century barbers.

Of course, much like the trend for thick, oversized eyeglass frames and pink highlights, once Avril Lavigne adopts it, you know it’s beyond mainstream— and Lavigne has been known to rock all of the above at once. “We’re probably gonna look back on [the undercut] and go ‘What the hell was going on?’” says German. “Although I do think that it has pushed even the average person to be a lot more stylish than they might have been before.”

Which leads nicely back to my situation. Eventually, it all got to be too much for me—and Paz too. “A 12-year-old girl came in [to the salon] with her mom and I thought, ‘We’ve gotta move on from this,’” she says.

Last winter, we both began the awkward, slow process of growing out our undercuts. By the end of the year, I’ll be nearly ready to rock a chignon or one of the soft, romantic looks that Paz says her clients tend to request these days. Romance. That’s unlikely to end in tragedy…right?

My flirtation with the undercut was likely a last-ditch stab at youth. But some say the hairstyle’s current popularity is symptomatic of a coming brand of feminism, that so-called “fifth wave” of women who embrace beauty and femininity while dominating their fields. It piloted the trend in the ’80s—a time when punk rockers were as likely to be women as men—for combative fashion. Back then it was a power play, and even now the designation “undercut” brings to mind something that threatens with confrontation.

Beauty trends: How to get the PUNK BEAUTY LOOK

Today, says Dr. Sarah Cheang, a design historian at London’s Royal College of Art, “the visual irregularity and aggression of very short or clippered areas create a disturbing juxtaposition with the femininity of long hair and bring to mind the dangerous image of punk.” Marching out of the salon with a fresh buzz brings a frisson of potency. “It’s a double message of femininity and threat that may make an onlooker feel uncertain. And therein lies its power,” she says.

With many women still living in a sort of limbo between male dominance and true emancipation from traditional mores, the cut illustrates a discomfort with the status quo. “It plays on similar dynamic tensions,” says Cheang. “It’s that expression of female empowerment through the heady mixture of objectification and individual self-assertion that occurs when women play with fashion.”