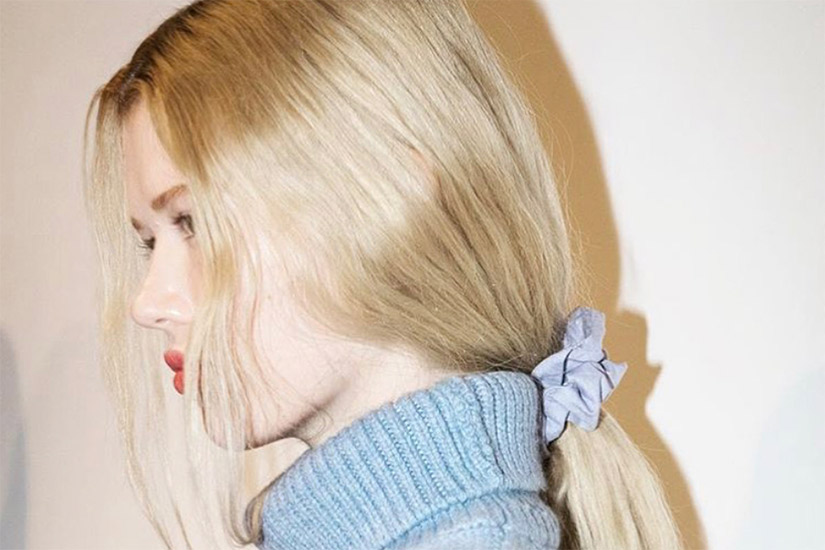 My hair has not met with a scrunchie since sometime in the mid-’90s. Although, I’ll admit, I loved them once. I had a friend in high school who devoted an entire drawer to her ever-growing multi-fabric, multicoloured scrunchie collection and whom I obviously envied wildly as the embodiment of cool. But decades have passed, and I now behold the hair accessory with the same bewilderment and shame I like to reserve for former loves of the human variety. I had happily relegated them to that never-again category of damning adolescent accoutrements, where they shared residence with my retainers and the slouchy wool socks I used to wear with Birkenstocks.

Yes, I had happily dismissed the scrunchie — the way I had my brown lipliner (more on that later), acid wash and neon—as a misbegotten fad of yore. But, alas, fads can sometimes prove as circular and elastic as the hair accessory itself. In 2011, Marc Jacobs started selling them (for $32 each), patterning them with lips and logos. The U.S. Olympic gymnastics team wore them to make tight hairline-tugging ponytails during the 2012 games.

(In an interview with Today, gymnast Lindsey Green lauded the scrunchie’s near-bionic adhesive powers: “I don’t know what they make these things out of, but they hold your hair so much better than a regular elastic.”) More recently, in the spring/summer 2013 shows, Vivienne Westwood’s models sported them and Ashish featured girls (or so-called “mathletes”) in glasses, their long hair parcelled up messily into topknots courtesy of sequined handmade scrunchies. And there’s more: London design duo Laura Fraser and Eu Simo Grijalbo founded the company My Crazy Scrunchie (MCS). To promote their debut collection, Fraser and Grijalbo produced a lo-fi short film starring British models of the moment Cara Delevingne, Clara Paget and Suki Waterhouse, in prairie-chic gingham-andlace ensembles, riding horses as they brandish guns and take aim at one another’s scrunchies — all soft handloomed lacy confections.

The scrunchie was patented in 1994, naming Rommy Revson as inventor. Tied to a bygone Working Girl epoch (cue Carly Simon’s “Let the River Run”), when Staten Island secretaries with vertically inclined bangs marched to the office in nylons and Reeboks, the scrunchie then (we thought — we hoped!) went the way of the spray-stiffened, frost-tipped coifs it spent its heyday adorning.

It achieved near-Smithsonian-worthy infamy in an episode in season six of Sex and the City, when Carrie mocked her then-boyfriend Berger for suggesting in his novel that an urban woman would wear a scrunchie in public: “No woman who works at W Magazine and lives on Perry Street would be caught dead at a hip downtown restaurant wearing a scrunchie!” If once accoutring the ’80s-princess bulky-banged likes of, say, Samantha Micelli on Who’s the Boss?, the scrunchie went on to claim a pitiable second act as a telltale sign of the suburbanite. I’m hardly the only one scandalized by this hair accessory’s return. Even the U.S. State Department is on my side: Officials, despairing over Hillary Clinton’s controversial commitment to the accessory, has longed to enforce a ban on the scrunchie. (Last summer, Clinton went so far as to sport a soiree-ready version in metallic paillettes for the Gender Equality and Women’s Empowerment Policy Dialogue in Cambodia.)

But let’s face it: Neither the Olympic nor the political podium has historically been the ultimate platform for chic. American Apparel has been hawking scrunchies since 2009, but the company is the clothier laureate to the terminally ironic. A recent ad campaign features a woman in a 20-Minute Workout-style unitard lounging on a soft hillock of neon scrunchies. “That sounds like heaven, doesn’t it?” Emily Dougherty, beauty director for ELLE U.S., tells me dreamily over the phone. I assume that Dougherty’s affection for the scrunchie is also ironic. (In my defence, the scrunchie is hardly a symbol of the urbane, so Dougherty — a well-respected Manhattan-based industry professional — seems a distant cry from the stereotypical scrunchie-wearer.)

Dougherty bristles at my assumption. “My beauty philosophy is to never wear anything ironically,” she says, although she admits that people sometimes do a double take. Of the scrunchie’s divisive impact, she says that she can’t think of another beauty item that people disdain. “There’s no middle ground,” she says. “They cause so much rage! I don’t know why; they’re just hair holders! People either love them or they hate them. I’m firmly in the love.”

What has Dougherty so enamoured is a trifecta of functional beauty goodness: Scrunchies are useful, gentle and have styling powers. “A fluffy, delicious scrunchie prevents breakage and also adds waves,” she says. Fraser, designer for MCS, is similarly unashamed. “I like that they are big and frilly and keep your hair out of your face!” When asked about the violent reactions their revival elicits, Fraser muses that it might just be a generational thing. In an interview with the United Kingdom’s Telegraph, the MCS designers shared an impressive vision for their scrunchies: “We want them on the tube, at the football, at a rave, in schools, on Rihanna, at Carnival and on the Queen!”

The scrunchie of today has experienced a bit of an evolution. If its voluminous ’80s foremothers were used to hoist limp, skinny ponytails, the scrunchie du jour is better used (as Ashish’s models demonstrated) to hold a topknot—as fashion-forward and functional a hairstyle as you can get. “They make a great quick topknot and give a pop of colour,” says Dougherty enthusiastically. “A scrunchie adds volume, and it’s really hard to snag your hair on them. There’s something very soft and comforting about them — like wearing a pillow on your head.” I like pillows. Under my head.

But maybe I should try one on top too. I’ll even slip on some Reeboks and nylons for the occasion.

This article is from a 2013 issue of ELLE Canada.

You don't have to hibernate until spring.

These are the freshest ways to cut, colour and style your hair next year.