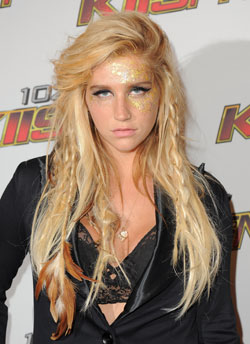 The avian trend has been popping up throughout fashion for the past few seasons. From feather frocks to avian-inspired accessories. The next avian trend? Feathered hair extensions. Not only did feathers adorn frocks at Pucci and Prada, but plumage decked out ponytails at Gucci and have been seen on everyone from Selena Gomez and Miley Cyrus to Hilary Duff and Ke$ha. We have the inside scoop on taking your hairstyle up a few notches with the help of some on-trend tail feathers.

Feather
hair extensions, which are actually rooster tails, first appeared on the scene several months ago, and have since made an aggressive move towards the style spotlight, thanks to the spate of celebs rocking the look, not to mention designers accessorizing with feathers during the fall 2011 shows. We witnessed striking, theatrical feather
hairpieces on Jean Paul Gaultier’s runway; spied eye-catching hats decorated with pretty plumage at Chanel, and admired models decked out in feathers as they strutted for Cavalli and Alexis Mabille.

Doll Bar Inc., a hair extension salon in Toronto, offers the coveted feathered variety in a rainbow of pretty hues, from hot pink and bright green to red, yellow and orange, and if you want something more neutral, black and grey are also on offer. Owner Melissa Mckenzie is noticing more and more people getting on board with this playful trend and sees the extensions as a fun and versatile style option. “They’re a really great way to hip up your look,” she says.

If you want to treat your hair to some bohemian flair – think an update on the penchant for putting flowers in your hair in the 70s – this is a simple and affordable way to do it (they average around $15 each). The avian extensions are either attached with fusion (adhered to your hair with glue and infrared light), micro links or metal clips and only take a few minutes to apply. The fact that you can be in and out of the salon fairly quickly makes them an attractive option for the time-crunched or anyone who just wants a simple yet stylish way to update their look.

How to wear the trend on the next page …

Once attached to your tresses, Mckenzie says the extensions usually last about a month, and when it comes to taking care of your newly feathered locks there aren’t any strict dos and don’ts to worry about. “You just take care of them as you would your natural hair,” she says. “You can flatiron them, you can curl then, wash them – they’re pretty durable.”

Depending on the look you’re after, you can choose from long, thin feathers or those that are fluffier and plumier. The thin feathers offer a more subtle statement whereas the substantial plumage makes for a more attention-grabbing option. A lot of people like to get them in threes but there are no rules other than don’t overdo it. Too much of a good thing – especially when it’s feathers – can look more like a Halloween costume gone wrong than a fashion-forward choice.

On most people, feathered hair extensions look great tucked in behind your ear, amidst non-feathered strands so that they peek out between layers of hair, or if your tresses are particularly thick, having a few feathers cascade down the length of your hair can look equally chic.

Festival season is back! Here are the most trendy hairstyles of the season to try right now.